We do not know why exactly we decided to travel to Trincomalee aka Trinco, one of the regions of the northwest coast of Sri Lanka. In its vicinity there are some dream beaches like Uppuveli and Nilaveli. With a little bit of sadness we leave Maldives but we are eager to tour Sri Lanka! We landed at Colombo airport and it seems that we have changed continent!

We pick up the SIM that they give away at the airport and direct by bus to Fort Colombo. We only step on it to catch a night train that crosses the whole country to finally reach Trincomalee, which was an important fortified port. The bus is full and has a TV where they project an entertaining movie with musical numbers, comedy and action scenes. The road is good without much traffic. The bus stops and picks up people. In sections it is crowded.

We reach the station, chat with people there, who at all times behaves super good with us, while we wait for our train. At nine o'clock it arrives punctually and we look for our seat in third class, and to our surprise it is luxury! The trip was very pleasant and we went through some beautiful landscapes.

We arrived at Trincomalee between yawns at five in the morning! But here does not end the journey. We caught a tuk tuk with a girl and we go to the Nilaveli beach. Actually it is such a little tourist place that it cost us enough to find a hostel to stay. We found some scattered luxury hotels that we can never afford for economic and moral reasons.

We moved and asked all the hostels we head to the Uppuveli area. Finally, after going through a tremendous heat and starving, we chose to stay at one with private bathroom, fan, mosquito net, and wifi. We would visit the city the next day. So we go to the Uppuveli beach. The beach is long with white sand and flanked by palm trees. Next to our hotel there are others (a couple of them more luxurious). All are low buildings, integrated into nature.

Behind them are the homes of the locals. They are simple, and some have set up in them a small grocery store or a home-made restaurant. This area is still developing. The war also hit her hard. Tourism did not start long ago. Our stay there coincided with the Buddha Purnima or Vesak, the Buddhist festival during the full moon.

The devotees, dressed in white, smiled at us and, the more extroverted, greeted us and asked us about our origin. At that time of the afternoon the boats were leaving from that port for the fishing in the night, which they do with lamps. Some kids play cricket. The road leads to the main road.

We booked a tour to Pigeon Island. The tour includes the transfer by boat to the island, the entrance to the National Park and the rental of snorkeling equipment. Also our tour included bananas, cookies and a couple of small bottles of water per person. Getting to the island was a small adventure since our boatmen, to save time, only made half the journey.

When we arrived at the island, there was a circuit marked with buoys and we only saw fins, tubes and girls in bikini in the water wherever we looked. We came to the conclusion that the beaches of Trincomalee are deserted because everyone is on the island.

The boatman left us on the island and showed us the tree where we could leave our things. He showed us the two snorkeling areas. The buoys circuit was the area of turtles and sharks and the one that was on the other side of the island that was the one of the colorful fish. So we went to see if we saw any shark. Upon entering, we saw a turtle eating calmly in the coral.

We also saw squids. I had never seen them swimming and I was very excited. The visibility was pretty bad. I was overwhelmed a little, because the glasses that they had left us got very foggy and did not look good. Knowing that there are sharks around us and that we cannot see them coming did not amuse me. So I came out of the water.

And so, unwittingly, I saw the first sharks of the day. Being on the shore of the beach, I realized that I had a couple of mini tibus swimming around me. The second snorkeling area did not impress us too much. There were fewer people and the variety of small fish that there was nothing spectacular. So we went back to the first area and this time, we saw 3 big sharks.

With that, we could go happy after 3 hours of snorkeling. We returned to Uppuveli with the two boats and spent the rest of the day resting. Coming from Trinco, in that detour we find a pizzeria and a tourist information office. We arrived at the hotel tired and starving. The only thing we wanted was a shower and a banquet. For dinner we went to a restaurant at the foot of a lagoon. We have a seafood menu with omelet, some soups, and noodles and rice with chicken curry. We also drink lassis. 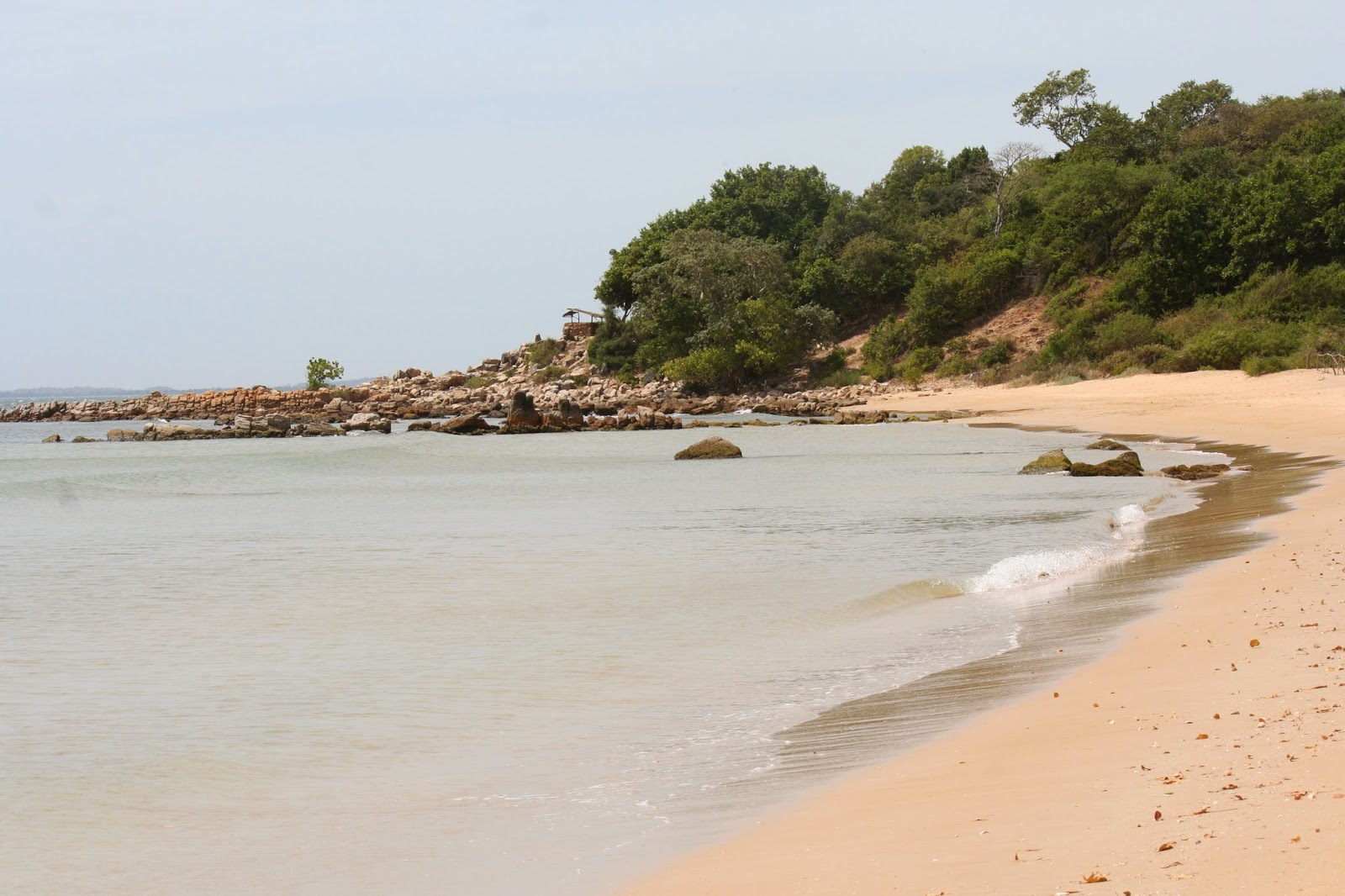 From Uppuveli beach we go in an auto rickshaw to the city that has a boot shape. On its heel is Fort Frederik, an unmissable visit! It is a large extension that occupies all that point, closed by a wall. After passing its old entrance arch, we pass through a temple with stupas, statues of Buddha. We also get aerial views of Trinco. There are several terraces (ideal for breakfast).

Many deer roam around there, and the best is at its end. We see the very beautiful Koneswaram Kandasamy Kovil temple. It is one of the 5 historical Indian temples, and a place of pilgrimage for millennia. It is dedicated to Shiva, raised to protect the island from natural disasters. It is an awesome place.

On its exterior rises a large statue of Shiva with 4 arms and his blue body. We enter that temple full of paraphernalia. Among it is the sacred lingam. We take the path that runs over the high cliff. At the foot of that temple there is a row of stalls selling souvenirs as well as religious objects and offerings.

As the heat tightens there we take an auto rickshaw. We reach the long Dutch Bay, which is the sole of that boot shaped island, with its beach of golden sand. And we got off at the beach pickup, half occupied by the fishermen's boats and half empty since it is a military zone and the area is restricted. We take a bath in the boundary between the two.

Behind this beach there is a lake where the dhobi clean the clothes, placing them in long tendales and on the lawn. There is also a deteriorated temple. We left on foot of this neighborhood that is eminently Muslim. The greeting now is salam aleikum.

We get into the cane of that boot which is the center of Trinco. In 10min we are in that center where the main temple is located. In it we attended a ceremony with two musicians who played flute and drum. A priest places a mark in the middle of our forehead and purifies us with fire, passing a candelabrum over our heads.

After a few lime juices in the luxurious cafe, located in a restored historic building, facing the sea, we go to the St Mary's cathedral, hidden among the alleys. From here we went to Dockyard road where we found a very nice terrace restaurant specializing in Sinhalese burgers. Although they have a variety of dishes.

We ordered a veggie patty burger, chicken hamburger, grilled chicken burger, and rice with vegetables, water and juices. And it was so good that we asked to take with the idea of ​​making a little snack on the beach. We order noodles with chicken and veg fried rice. The portions are huge. They put them in some take away boxes.

Going up the Dockyard road we arrive in 10min to the central bus station where we learn about the ones that go to Polonnaruwa. There are no direct ones. In that bus station we take the one that goes to Nilaveli Beach. It leaves us near the beach, which is also long, with white sand, palm trees, with only a couple of hotels.

Opposite the coast, we can see some small islands. It is the Pigeon Island National Park, very popular for snorkeling and scuba diving. A boatman approached us. After a fresh bath and a beer, at sunset we returned to Uppuveli in an auto rickshaw. We have the dinner on the beach with our take away.