Today is our second day in Taiwan and we are going to take the red route. We go to Kaohsiung, where we will visit Lotus Lake and Cijin Island. We got up early, had breakfast included in the hotel, checked out and went to the Taipei Main Station to take a high-speed train to Kaohsiung. Upon entering the station we follow the signs and easily reach the ticket office of the high-speed train.

We bought tickets. The high-speed train is one of the few expensive things in Taiwan. The normal train is much cheaper, but we wanted to arrive early so that we would have time to see Kaohsiung. We followed the indications and arrived at the platform without problem. The best thing is to be guided by the train number.

It is the first thing that appears in all the panels and also because of the departure time, because they are very punctual. The trains are very long and on the platforms there is a place for each car. The truth is that it is very well indicated. We got into a car and sat in seats that were free, but at the next stop the owners arrived.

Later we could see that allotting separate seats is a common practice. And so we walked from seat to seat. We got to be the talk of the train. We are the only tourists and it seems that we have strained without paying. Our stop was the last, since the high-speed train currently only goes from Taipei to Kaohsiung.

In a matter of an hour and a half we were in Kaohsiung in Xinzuoying station. Now we had to take the red metro line to get to our hotel. We followed the signs and arrived immediately. It is the second largest city in Taiwan, after Taipei. The subway is new, modern and cheap. We go to the Kaohsiung Main Station, where we have our hotel for tonight.

Our hotel is next to the main station of the normal train of Kaohsiung, which is currently under construction. There is a fence and we can not pass. Google Maps tells us an alternative route. We asked a girl, who in turn asked a boy. He explained it to us very well in English.

We have to enter the station, go up the escalators as if you were going to take a train, ask for a free ticket to go through the bridge on the platforms and exit on the other side of the station. We did it and we arrived right away. It was 11 in the morning and the room will not be available until 15:00, but they keep our bags.

We asked the friendly and pleasant receptionist to call us a taxi to take us to Lotus Lake and we instructed him to leave us at the Dragon and Tiger Pagodas. We could have gone with public transport, but it is necessary to take the metro and then bus, so we prefer to take a taxi and not waste time.

Upon arrival he showed us where the pagodas were, but it was not necessary. They were next door and they were visible perfectly. The lake is located in the north of Kaohsiung and receives this name because on its waters float lotus flowers in summer. Now as it is December there was none. It is one of the main attractions of Taiwan.

At the time of Japanese rule it was used as a military base. It was remodeled in 1959. All the temples surprise us with their beautiful roofs, for the wealth of the interior adornments and for the golden altars. This temple is dedicated to Bao Sheng Da Di, a doctor who saved many lives and who become the God of Medicine.

Always next to each temple there is one or two Pagodas of higher or lower height, but always with an odd number of floors. It's funny, that even in the hotels there is no floor number four, because it's the cursed number. It's like 13 for us. The Pagodas of the Ciji temple are located opposite, inside the lake.

They are one of the main attractions. To reach them we have to cross a bridge over the zigzag lake, which has 9 sections. They say that only demons can cross it in a straight line. The Pagoda on the left has before it a huge Dragon and on the right a huge Tiger. It is very important to enter through the mouth of the Dragon and exit through the Tiger to get lucky and get rid of evil spirits.

If it is done the other way around, the result is the opposite. Inside, the Dragon, it is very beautiful. There are corridors full of sculptures on the walls protected by a crystal. There are sculptures are of bad men who go to hell. At the end of the hall we find a table and a lady who asks for a donation.

We toss some loose coins and she gives us two postcards of the pagodas. I think the postcards were worth more than the donation we gave. After going through the interior of the Dragon we reach the pagoda which has 7 floors. To climb there are some beautiful spiral staircases. We go peeking on each floor. From the top the views are wonderful.

The Dragon Pagoda communicates with the Tiger Pagoda through a bridge. Both Pagodas are exactly the same, with the only difference being that one is adorned with tigers and the other with dragons. We also went up because the views are different. I would say even more beautiful. Finally we went out through the tiger's mouth.

The interiors of the tiger is the same as the dragon, but the sculptures on the walls are of virtuous men who go to heaven. We have entered through the bad guys and we left through the good ones. Going forward we find the Ciming Temple, a three-story palace reconstructed in 1973. It is an oriental style with large stairs to access it. It is bigger than the previous one and very beautiful with a wealth of impressive interior. It is dedicated to Confucius and Guanyin.

In front of the temple are the Pavilions of Spring and Autumn that are the Pagodas belonging to the Ciming Temple. They are two towers of 3 floors separated by the figure of a huge dragon, on which Guanyin rides, the goddess of Mercy, dressed in white and accompanied by two children. Here we also enter through the mouth of the Dragon, climbing beautiful red stairs that pretend to be its tongue.

In the inside are beautiful corridors with high reliefs on the walls that narrate the life of Guanyin. Dragons are very important in Chinese culture because they symbolize power. From the pavilions of Spring and Autumn a bridge that goes into the lake ends in the Wuli Pavilion, which is a symbol of fortune and peace. It is also the tourist image of Kaohsiung.

It has a beautiful spiral staircase. From here we could see the herons that are in the lake. The Beiji Xuantian Shang Di Pavilion is accessed through the Pavilion gate and is reached by a beautiful bridge adorned with small statues. In the background is the giant statue of Xuantian, the emperor of the dark sky.

Repenting of his sins, he tore off his stomach and intestine that threw them into the river. The stomach turned into a turtle and the intestine into a snake that was dedicated to doing evil. That is why he is represented sitting on a large rock holding the Qixing sword of the Seven Stars and stepping on the tortoise and the snake.

We enter the interior of Xuantian, where his sanctuary is, with another figure of God and a huge column of candles. On both sides there are small Pagodas that we no longer pay attention to after seeing so many wonders, but they are very beautiful. At the door there is a kind of rare and original slot machines.

In one of them, a Taiwanese pulled coins very hard to the face of some sculptures and when he was right, they would play their musical instruments. Another of the machines gave a paper, written in Chinese, I suppose that auguring the future. Further on to the left we find the Tianfu Palace, which is the largest temple in the Lake.

Tianfu means wealth and abundance. It was built in 1660 and has been renovated many times to keep it in perfect condition. It is a center of pilgrimage and worship that even offers lodging to its faithful. It is guarded by giant lions that embrace enormous stone balls. A very kind caregiver left us without asking for a book so that we could read the history of the temple in English.

We went ahead and found the Wenchang Temple, which cannot be seen well because it is covered by beautiful weeping willows. In Taiwan there are many temples dedicated to Confucius and this is the largest. It was built in 1684. The door was ajar and we snuck in, but then a worker came to throw us out. It is seen that it is under construction. Fortunately, it gave us time to take a picture, because it is really beautiful.

Finally we visited the Palace of the 3 Hadas, another beautiful temple with an amazing ornamentation. In front there was a market full of stalls that showed that they had sold fruit and vegetables, but by now they were picking up. Here we began to have an experience that would be repeated throughout the trip and is that people look at us, smile and greet us.

Many of us take photos secretly and others ask us to pose for them or take a picture of us as if we were lifelong friends. We had spent more than 3 hours doing this tour and we were tired. We were hungry and it was also hot. Right there next to the Palace of the Three Fairies we stopped a taxi and asked him to take us to the Xinzuoyin High Speed ​​Station.

In the station we bought salads and sandwiches, which we ate there. We had seen some restaurants on the lake, but none were to our liking. We found them very tacky. 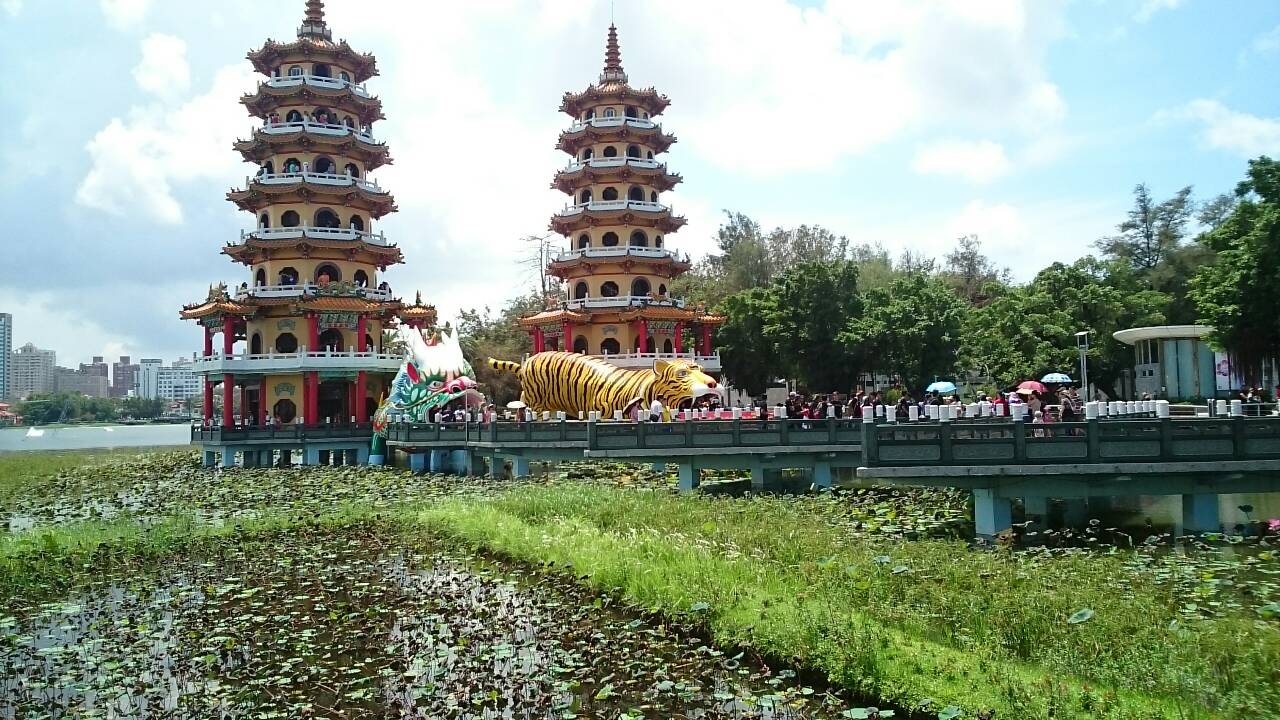