After 3 hours of travel by taxi, we arrive in Shillong, the capital of Meghalaya and the self-proclaimed rock capital of India. Bara Bazaar welcomes in the entanglement of its steep streets Iewduh, the oldest market of Meghalaya. The Police Bazaar, right in the center, is also a huge open-air market. The entire space is occupied by sellers, buyers and onlookers.

The smells of freshly slaughtered chickens mingle with those of the fruits that have been damaged, along with paranthas and omelettes. As soon as we set foot in Shillong, it was impossible to ignore that we are in Khasi land as most restaurant signs indicate the presence of Khasi dishes on the menu. I do not promise to taste all the local specialties, like the Jadoh, rice cooked in pig blood!

All this rubs with the sellers of baubles and the Siat Khnam betting shops, a popular and very lucrative local sport in which men shoot at a target and spectators must bet on last two digits of the total who fiercely defend their pre-square. It is already dark and we quickly choose a hotel.

The arrival at Shillong was a shock. I imagined a nice little village and found myself in a real city teeming with activity, traffic, noise and life. The saris are also rarer, often replaced by dresses, skirts or a checkered fabric shorter than a sari, knotted differently. Shillong is a wonderful city, but is very, very cold here! This is a kind of mantra that feels a bit everywhere here in the North East, but the city is actually much less beautiful than what is described.

Are we in Scotland? On this morning of Sunday, Easter bells ring throughout the city. The city where we were on Easter day is none other than Shillong, the capital of Meghalaya. From the balcony, we can see many steeples among the roofs of houses and buildings. In the streets, families walk out of the churches.

After a good breakfast in a downtown restaurant, we take a taxi to tour the city and visit interesting sites. I head to the Shillong Cathedral and could see that the mass was held both in English and Khasi. I especially liked the young and carefree atmosphere, very different from the typical Indian cities.

There is still a museum to visit, the Don Bosco museum. It highlights the tribes of the northeast and is the largest museum of this type in this part of Asia. We visit the extraordinary bara bazaar market interlacing with lanes which each has its specialty like fruits, vegetables, tobacco, iron, fish, meat, textile, bamboo and sugar.

We spend a few hours at the Lady Hydari Park Zoo and the Wards Lake. At the artificial Ward Lake and its park tourists spend crazy afternoons on pedal boats. We then go to the botanical garden. We visit the Shillong Peak that offers a panoramic view of the city followed by the Elephant Falls, which was unfortunately partly closed to the public. So we could see only one waterfall.

We also attend the Nongkrem Dance festival, the annual big festival where the Khasis thank nature for the harvest, with many songs and dances, as well as sacrifices of roosters and goats. The unmarried girls wear magnificent silk garments for these dances. As the driver offered us a competitive rate and he was friendly, we leave with him immediately to Cherrapunjee.

We get on the car and cross many villages with small houses, and everywhere there are churches, cemeteries. The landscape is grandiose. We get out of the car once arrived on a kind of high plateau. This plateau which rises around 1300 m above sea level is crisscrossed with huge canyons and superb views on the road. I stopped to have a tea in his dhaba, rereading for the twelfth time the 15 lines of my guide devoted to this part of Meghalaya.

Tall yellow and green grass beaten by the winds extend to get lost in the mist. A tall menhir stands up to the sky, surrounded by what looks like dolmens. It is rather cool and we dress more warmly before entering the sacred forest. Between the trees, the carpet of orange and red brown leaves is dotted with megalithic alignments.

A few hours later, we walk in the middle of a pine forest. It's hot, as the sun is shining, and we hear the locusts. The smell of pine is intoxicating! Our beautiful trail narrows and descends abruptly into a gorge where a river flows whose blue water is almost turquoise. Arriving in Sohra, we are greeted by several signs whose message is almost always the same: Welcome to Cherrapunjee, the rainiest place on earth followed by a list of figures that are in fact the recorded rainfall levels these last years.

The Lodge is located in Lower Cherra back from what looks like a small suburb and not far from the first Church in the State. Our cottage in Cherrapunji is watered by torrential water located. At night, a storm breaks out. It rains heavily, as thunder roars and lightning lights illuminate the sky almost without respite. 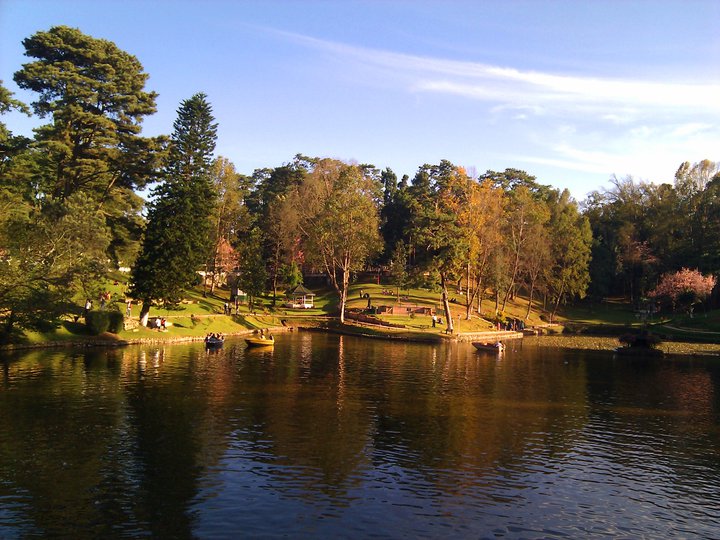 In the early morning it rains, and is cold and wet. The pre-monsoon fog was particularly dense on the morning, giving Sohra a ghost-town feel. We light a fire in the fireplace of our house made of stone and wood. In the fields that emerge from the mist we can see sheep and cows grazing. The rain and the fog do not stop almost from the day. Are we back in Scotland?

Yet, at about twenty kilometers, where the altitude is lower, we are immersed in the rainforest. The ambient smell evokes good memories. The path made of cement steps descends into the depths of the forest winding in the middle of huge trees. The trunks are twisted with lianas.

Among the wide variety of flowers, there are hibiscus and orchids. Butterflies of all colors are flying around us. They are the size of small birds! The concert of insects is such that it is not surprising to find specimens of size or unusual color in our eyes. We hear a lot of birds too, and parakeets fly away as we pass.

We finally arrive in the small village of Riwai, astonishingly clean for India. It's amazing, as nothing hangs, and everything is clean! After a few minutes and a few rupees spent we arrive at our goal, the living root bridge, explanation. This extremely rainy region has a tree species that we know well, the ficus elastica, or as it is called rather, rubber.

It produces aerial roots, and the inhabitants of the region have the habit of directing these roots and making them cross the rivers to replant them on the other side. By repeating the operation I do not know how many times and thanks to the rapid growth of these roots, the inhabitants braided real bridges alive over the rivers, some even two floors!


The bridges are super strong. We unfortunately had the time to see one. The others are relatively difficult to access, but this one was already very impressive. In the same village the inhabitants have created a system of bamboo bridges that climb to the top of the trees, on the canopy to see the plains of Bangladesh that extend a few kilometers further.


I went exploring the area, starting with the Nohkalikai Waterfalls. From the market of Sohra to the falls, I crossed for 5 kilometers, very green and hilly landscapes. I see the few solitary wooden houses, churches, a cemetery and the culmination of this solitary walk, is a breathtaking spectacle. The Nohkalikai Falls, the fourth highest in the world, were worth every missed opportunity in the past. The panorama did the rest. The high cliffs seem to emerge from the forests to advance then leave room for the floodplains of Bangladesh. The mist had disappeared like magic, and I found it beautiful.


We then head to the Maswmai caves. After entering through a first room high enough and wide, the passage quickly becomes more difficult and sometimes almost perilous. After several passages in very narrow casings, we find ourselves drenched and we start thinking that there may be no way out. Finally, with its 250 meters long and sometimes up to 15 meters high, crossing the cave is really impressive!

On the return we stop at the cleanest village in India in Mawlynnong, which is indeed dazzlingly clean after what we were able to see! We also see the stone in balance! It's time for us to go to the hotel.