I was invited by my friend to a Bengali wedding in Kolkata. I spent a week with my friends, attended the aiburobhat and looked for a kurta, pyjama and sari and other accessories like bracelets, earrings, necklace, and bag. It all has to match the color of the sari that in the end, I chose. Choosing the sari was not an easy task. There helped me her friends and still, we spent an entire afternoon in Burrabazar. We looked for the perfect sari that was good, nice and at a reasonable price.

In the end, I chose one red Banarasi saree with brown and gold border and another one with a pink and purple border. The truth is that we were a bit messy and we were looking for the bag until the afternoon before the wedding.

The wedding was in Howrah, and it was the first time that I was going to cross the river. We found a bus next to our house that took us to Howrah Railway Station after half an hour. We had the problem later. We did not know Howrah and we did not know where the marriage hall that the family had rented for the wedding was.

We call the family, ask the people and the taxi drivers. It was a complete chaos. Every time we called the family they gave us a different address as a reference, and we did not understand any of the names, in any way. Further, with the noise of the station behind, there was no way to hear anything.

In the end, my friend called me and gave me the instructions, and there we took another bus to the marriage hall. Here weddings are usually held in halls, not entirely hotels, but buildings prepared to accommodate many people and with food to feed them. This was an ordinary room but decorated with lots of lights and flowers. When we arrived it was already 5:30, but no one had arrived yet. There were only some members of the bride's family, and nothing more. 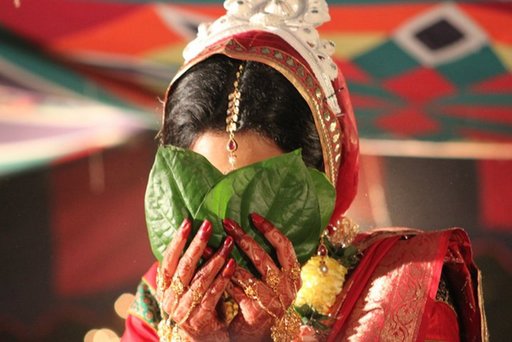 My friend was getting ready in a room where women did not stop coming and going. She had to change to put on the sari. One of her friends and perhaps her aunt helped her with the sari. She looked very beautiful, and seeing how she put on those 5 meters of cloth around the body is an ordeal. After three or four unsuccessful attempts, in the end, she managed to dress it more or less appropriately. Even so, throughout the night she had to fix some parts because it got misaligned.

At about 6 o'clock more people began to arrive, especially photographers. There were about four or five who did not stop taking pictures of the bride and relatives. I do not know how many photos we got with my friend, but every time they called us twice. It was first with the friend, and then with her other friends, and then with the father and the aunt. They left us blind with so much flash.

But we were late and we had to leave before everything was completed. We had at least three-quarters of an hour to travel to the Guest House, although it depends on traffic. And the ceremony lasts for hours and hours. So after dinner, we said goodbye to the bride and we left.