Last winter I left Kolkata with the Baul who first invited me to his small house in a village between Kolkata and Shantiniketan. But first of all, I chose this destination because I remembered an exhibition of photos, with comments and music, on the Bauls. I wanted to meet these mystical nomads, living their spirituality through music.

Being a musician myself, professionally and at heart, I was attracted by these singers who compared themselves to foraging bees. Indeed, they go from village to village to sing their songs in exchange for rice. They collect their pollen while transmitting the seeds of life from one place to another.

Of course, modernism has caught up with them, but this out-of-caste community, open to all religions, has kept the essence of what seems to me the Baul spirit, which is this fervor of life, made of crazy wisdom, freedom, loudly proclaiming their doubts and praises, their joys and their sufferings. And it appeared to me that it is more in their passionate music than in their lives that this Baul spirit is still alive.

They are now sedentary, married with children, and sing their mystical poems in exchange for alms in the countryside of Bengal. But they are still really vibrant, whether on the street, a train, at a rich Indian wedding or on a large stage. Seen by Indians as tramps, artists or spiritual masters, they are actually very proud, and at the same time very simple.

The baul is very sensitive because he sees clearly that the world is changing. He says that there are now more and more fake Bauls, playing in style because music has become a business. This village represents for him the authenticity. Over the past few days he has taught me things about philosophy, principles, musical and spiritual demands.

In this village, he made me go around his friends to drink chai and eat. We went to the Jaydev Kenduli village in Bolpur for the Baul Mela. There are hundreds of thousands of people, in a noisy fair atmosphere (and smells, but that's practically everywhere). There is music everywhere ! That's what surprised me the most. Indian music is subtle, and their way of mixing really is not at all! The music never stopped.

I bought a dottara, a kind of banjo baul. It is truly a great experience to play with these musicians who put their guts and soul into their songs whose lyrics vibrate with a philosophical and spiritual poetry. And their rhythms have a fabulous groove! They were very receptive to my singing. They all want, musicians and audiences, to come back next year.

We listened to music, and had a good time late into the night. Just before leaving I was shown a traditional instrument, the dudunga, that has a rope like the ektara Bauls. I tried it then bought. And I did not see the time pass. It was really magical. We have accompanied the Baul songs.

It's really the music of the heart and guts and I find myself really well inside, with something familiar to me. I integrated well with the music and they enjoyed it. The simplicity and depth of sharing really touched me. And it's quite late that I fell asleep, really happy. Tomorrow I will visit Tarapith to the temple of Maa Tara. 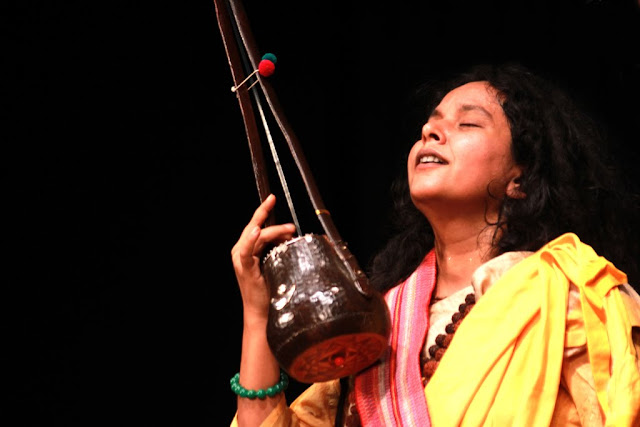