During our trip to Kuala Lumpur, we had the great fortune of witnessing, in a casual way, one of the most magical moments of our visit to the Malay city. We were witness to an authentic Indian wedding!

After the colorful visit to Chinatown, we were about to visit the second Chinese temple recommended in the guides. It was when, suddenly, we came across the Indian temple of great ornamentation. It was hidden in one of the streets of Chinatown bordering on Little India. This is Kuala Lumpur. The mixture of cultures is so intense that it is possible to find an Indian temple in the middle of Chinatown.

And so, coincidentally, we come to the incredible Sri Maha Mariamman. Sri Maha Mariamman is the oldest Indian temple in the city. It is located on the edge of Chinatown with Little India on Jalan Bandar. Its door has as an ornament an impressive pyramidal tower (Rajagopuram). It is almost 23 meters high and with five levels where 228 idols appear.

That day we were lucky. Inside we were waiting for one of the surprises of the day and the trip. A few people were celebrating an Indian wedding!

We entered with difficulty, but they indicated that we were welcome. They invited us to take off our shoes. From a corner, and almost invisible, we were lucky enough to observe unique rituals of ancestral character in an atmosphere of incredible smells and sounds. 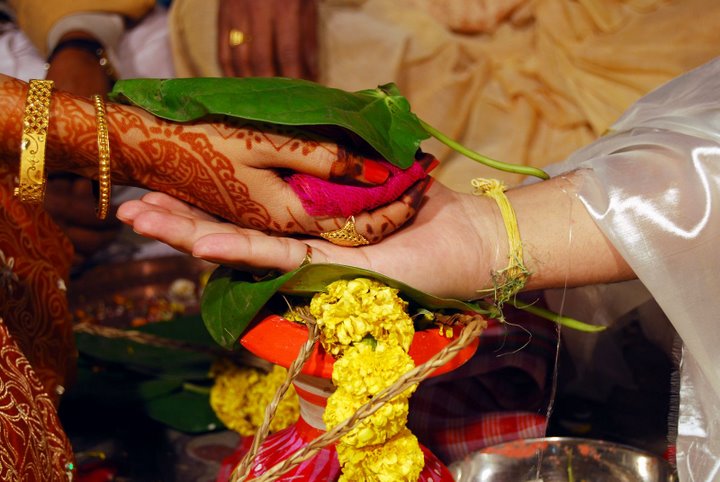 The guests were dressed in their finest silk suits and the most delicate saris. The colorful rituals were accompanied by percussion sounds and drums that gave the ceremony a cheerful, ethnic, and primitive character. The smell of sandalwood and other spices invaded the room.

The floor was adorned with complicated drawings as mandalas of good fortune made with all kinds of brightly colored spices and strong smells. The bride and groom were treated to the brutal rhythm of music with all kinds of offerings through a series of symbols of fire and incense inherited from generation to generation. We did not know its meaning but it kept us hypnotized.

Coincidentally during much of the ceremony, we were the only witnesses of that magical moment. My eyes did not blink and looked with my mouth open everything that happened around me. I remain hidden behind a column not to disturb, caught excited with my objective to capture a thousand and one images of the exotic moment.

The ceremony was held in the Main Hall of Prayer of the Temple which is built on five levels following the shape of the human body. Inside we can see a silver chariot made in India. It is used during the festival of Thaipusam to transport the statuettes of Lord Muruga and his consorts to the Batu Caves. Mariamman is a manifestation of the goddess Parvati, considered protective of the Hindus during their stay in foreign lands.

The bride and groom, dressed in bright colors, were carried away by the moment. The bride looked beautiful in her silk sari embroidered in gold threads. She was tattooed with all the detail of henna in hands and arms and wear her best jewelry and gold pendants. She was emotional in many of those moments and the groom, affectionately, consoled her.

There were very deep and emotional moments, such as when a series of sacred amulets were exchanged, or when the couple delivered a flower necklace as a symbol of acceptance and fidelity. It is interesting that once married, they receive the rain of rice from the guests as a symbol of prosperity.

The hospitality of these people is incredible. We were welcome. They offered us food and dates. We thanked them because we did not want to bother, but we accepted some dates as a courtesy so as not to fall into the offense.

Time stopped in that place. It was an intense morning and always to remember. It was a wedding of one thousand and one nights. It was a dream wedding, and an unrepeatable experience.