Mussoorie in the state of Uttarakhand does not offer much in terms of entertainment, but it is an excellent place for those who want to enjoy solitude. There is beautiful mountain scenery, beautiful views of the beginning of the Himalayan massif and the plains, pretty houses nestled on the mountainside, a good range of hotels and restaurants, some of which are quite chic. Located in the foothills of the Himalayas, about 30 kilometers from Dehradun, the city is known as the queen of the hills.

Not to mention a very friendly atmosphere made of a mix between locals and tourists, many of whom come here for their honeymoon. It was in Mussoorie in the Happy Valley district that the Dalai Lama established in 1959 the first seat of the Tibetan government in exile, before moving to Dharamsala in the state of Himachal Pradesh.

After the clouds and the rain of Darjeeling I let out a sigh when I boarded the train to Dehradun on a cold night. All night we listen to music and play card games. We did a carnival outside the train trip that lasted until the wee hours of the morning. In the end, I was almost out the window to take a look at the hills and forests.

At one point I could see the whole length of the train, and in the distance the mountains, half covered by clouds. My senses were assaulted by the delicious and indescribable visions and smells. I lay back and enjoyed the moment. Finally, the train stopped at our destination. Once we go down the train and left on foot, I felt overwhelmed by the beauty that surrounded me and excited by the adventure that awaited me.

The desire to explore unknown realms has only been strengthened over time. We hired a car which took us to Mussoorie. It took us almost two and a half hours to reach our destination. First we zigzag an hour to reach our destination, and then enjoy the beautiful view, with endless terraces, and a little British perfume in the architecture.

The place was some distance away, there was no concrete structure in sight except the complex where we were going to be and the beautiful bare hills. The city is still alive, but some places, look like as a scene in a cinema. We stay in an old Victorian guest house. The interior is really well preserved, but we imagine that at another time, the affluence had to be quite different.

After a quick bath in ice cold water, I went to the patio and sat on the fence facing the mountains. Calm, tranquility and silence of pin-drop prevailed. It was as if life had stagnated. The yellow ocher hills guarded the complex on one side, and the ecological park on the other. Sitting on the fence and looking towards a valley covered with forests, a fissure that separates the golden hills, I marveled at the serenity of the place, away from the dust and heaviness of city life.

A short walk along the snow-covered paths took me to the periphery of an apple orchard that stretched for several kilometers. Sunlight was welcome, filtering through the dense virgin forests of deodar, rhododendron and oak. A walk around was a delight, as it was a place stripped of any local settlement. We had barely walked a meter, when we were greeted with a heavy snowstorm that lasted a couple of hours.

That was the first time I witnessed a snowstorm in Mussoorie, and I felt no need to escape from that. I let every part of the experience sink. The green plantations that surround the area, as far as the eye can see, were covered with thick layers of ice. The logs stored for bonfires had been dampened, waiting for the morning sun to dry.

The weather was nice. It was cloudy most of the time, the fog floated from time to time. During the very nice walk in the mountains on the heights of Mussoorie (Landour), I got lost in the woods but luckily I met on my trail two very friendly teachers (and very surprised to meet a stranger in this remote corner of the mountain) who guided me to find my way.

Three layers of clothing had been enough to defy the cold along with boots, gloves and headgear. There was a shack near the compound, separated by a road, run by an old woman who offered excellent chai and maggi noodles. It was the perfect place to establish a balance between the healthy mind and the seemingly crazy one. 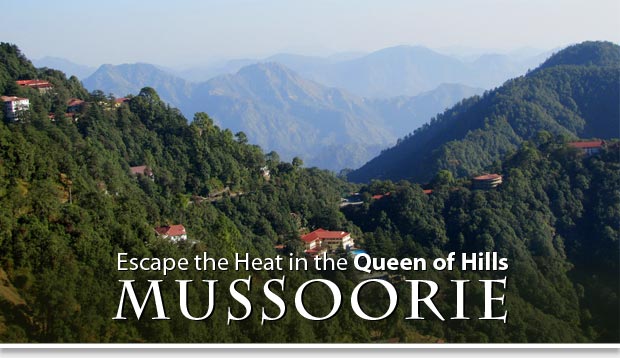 After a good breakfast we go to get a closer look at the mountainous horizons. From the Gun Hill, which we finally climb in the heat, the slope is steep. We are not too lucky, as the mists of heat do not allow a very clear visibility for the photos.

Bypassing the hill, we find in the middle of the pines, the old British cemetery, where the last witnesses of a long-gone era have not yet completely disappeared. But the bad weather comes to assault us, and the cold too. So we go back downhill to Dehradun, to be picked by a tropical storm. The only possible refuge is the station and its cafe.

While we wait for the tea, we are astonished by the sight of a fat guy, who screams in his phone, on the boys, on his computer and believes himself the master of the world, or almost. And we put our nose out once the past storm has passed, to move to the Tibetan quarter, on the edge of the city.

Past the gates, it's like coming out of India. The streets are clean, the houses painted, the people smiling and welcoming. It is clear that this Tibetan community has succeeded, and the sumptuousness of its temples, its immense Buddha and its sense of commerce testifies to this. The interior of the stupa is richly decorated and we arrive just in time to point our nose.

It is difficult to really get along with all these demons, incarnating ideas, vices or temptations that are watching men. The Buddha trones with an enigmatic smile and the laughter of the monks, busy teaching themselves dance steps in the courtyard of their monastery explain in part. Despite the exile, this community is prosperous. It takes 2 hours to get back home.

We have the meal with chapati, dal, aloo gobi in a good mood. We arrive at the station, drink a little tea, and we get on our bus.