We got up to go to the airport at 4 in the morning. There are hardly any people and we pass all the controls very fast. Luckily, at Delhi airport there are wonderful sunbeds where we lie down to sleep until boarding. We fly with Air India, which leaves us stunned when we see that we have a new Boeing 787 for a flight of one hour.

The air hostess give us breakfast. And we thought that yesterday's dinner at Royal Nepal Airlines had been something weird. At the airport in Amritsar a driver picks us up. He takes us to the hotel, which is right next to the Golden Temple. We leave the suitcases and we go to see the city. We do not have much time here and we want to take advantage of it.

Our first mission is to take out some money. We tried it without luck in the Delhi airport as the ATM machine did not accept our card for being MasterCard (only Visa accepted). Here we have problems again. In two ATMs there is no cash and in the third one we get a limited amount. We took that, although we would have preferred to take more.

ATMs in India usually have a withdrawal limit of 10,000 rupees. Some also do not support certain types of cards. It is advisable to carry both Visa and MasterCard. Our first impression of Amritsar is that it is a very busy city. In the pedestrian area there are many people, all heading to the Golden Temple, which is the main attraction here. There are also many Sikhs. After all, we are in Punjab, which is their territory.

We enter the Golden Temple. The Sikhs are very friendly. The Temple has doors in the four cardinal points to reflect that they are open to all visitors. In addition, they provide accommodation for pilgrims and have a free dining room. Today it is especially full because, as they tell us, it is an important day due to the Diwali.

Thousands of pilgrims have come from everywhere and the queues to enter the temple exceed eight hours. People huddle between the railings that form the row and it is quite an anguish to see them. Obviously we discard to enter and we are content to see it from the shore.

A family stops us and asks us for a photo. We think they want us to do it but no, they want to take a picture with us. It seems weird, but we accept with a smile. Half an hour later we have already had six or seven photos with different families. Some put their babies in their arms. It is very funny because we see people who look at us with curiosity but do not dare to ask us for the photo. There are also groups of friends. The strange thing is that usually women do not come alone and that, those who come, usually ask me for the photo.

The most curious thing happens when we see a Sikh who we take a picture of because his outfit is spectacular. Realizing it, he comes running behind and asks us for a selfie. And we were thinking that he was going to scold us for taking the picture. We go to eat near the Temple. We ordered a thali, which are some dishes combined with a bit of everything from dal tadka, punjabi wadi and amritsari chole. It is usually a great option to eat because it allows us to try several things and it comes out very well priced. The bad thing is that the same thing always comes along and ends up getting boring.

Then we take a little tour of the shops here and at 3 we get back to the hotel where our driver wait for us. We are not very clear about our destiny because we have not managed to understand his heavy accent.

It turns out that we are going to the closing ceremony near the Pakistan border, which is about forty minutes from Amritsar and it is a very rare thing. We were amazed. There are a lot of locals and barely half a dozen foreigners. This is basically a beating retreat border ceremony. The two armies, or a representation of them, face on the border with a kind of dance parade. Meanwhile, the public screams madly and waves its flags. It's like a football game. 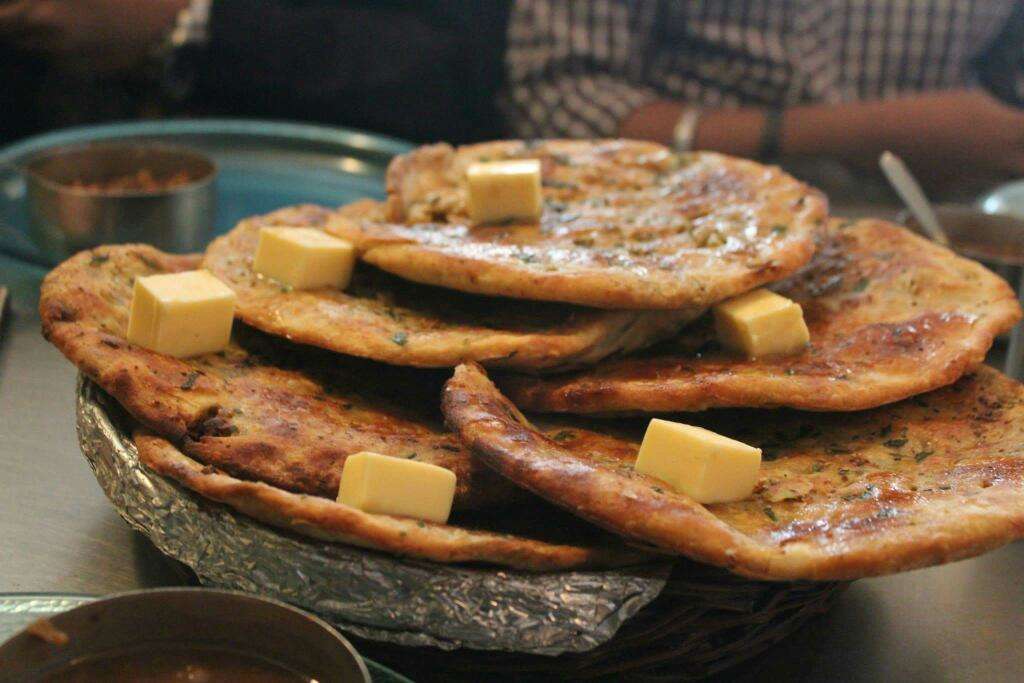 We return to the city and go to have dinner. I asked for something quick, which is also typical of Amritsar. We tried the amritsari kulcha, which is a stuffed bread that is very good. I also ordered shahi paneer korma and paneer fried rice. We also had a lassi and a kadai, which is something similar to custard, which is so good that we end up repeating it.

We go to visit the temple at night. People keep asking us for pictures and I do not know how many babies I could catch. The temple is beautiful at night, illuminated. We stayed a long time sitting on the shore of the pond. The queue continues as there is no tomorrow. I imagine it will have advanced but pilgrims have continued arriving. In the arcades there are people sleeping, also in the square that gives access to the temple.

After the temple we went through the market and I ended up buying a kurta, the typical long dress. We also tried a typical ice cream here called kulfi, which is the most delicious thing I've ever tasted. There was a moment when a group of children surrounded us. They looked like school children or something like that because they were with an adult woman that we suppose was the teacher.

It has been an authentic madness, as everyone wanted photos and did not give us life to satisfy everyone. In addition, other people in the street have started to be encouraged and we have become a bit overwhelmed. Some guys from a nearby store have taken pity on us and said something that has dispelled the tumult. We thank them and go to the hotel. We really laugh at the situation. It has been intense but fun.