If you ask me what I like most about India, I think the answer will seem a little obvious. It is the food. I recommend that everyone before going to a country begin to know the Indian cuisine. For various reasons, but especially religious, many people in India are vegetarian. In some areas they are more strict and do not eat roots or tubers like potatoes, and carrots especially if they practice the Jain religion.

You will find many vegetarian dishes, from samosas, potatoes, dal, spinach, in different preparations that I will tell you. And the paneer cheese, which is used in Indian dishes and in the adaptations of Western dishes (pizzas, pasta, sandwiches). It is a very special cheese that seems to never melt, and that everyone does not like. It has nothing to do with tofu, because the paneer is made from animal milk, not soy, although it can have a similar consistency.

We arrived at a very small town called Mandawa in which the "hotel" was actually a very small inn. The meals were included, but do not imagine a buffet, much less a restaurant. On the terrace of the inn there were some very homemade tables where we sat and waited for our meal without much chance to decide, comment or ask. So in the name of God I received my plate without having any idea what I was going to eat.

We were served Paneer Lajawab, dal, jeera rice and naan. To talk about this dishes we must first know what paneer is. As they say, each chef has their recipe. I could define the paneer as a kind of fresh cheese made basically from milk curdled with lemon juice, and generally without salt.

Paneer Lajawab is a stew made with cheese and tomato, some spices but not very hot. I would love to explain how delicious everything was and the satisfaction I felt eating, but the words would be short. I can tell you that from that moment the appetite returned to my body and stayed with me the rest of the trip. 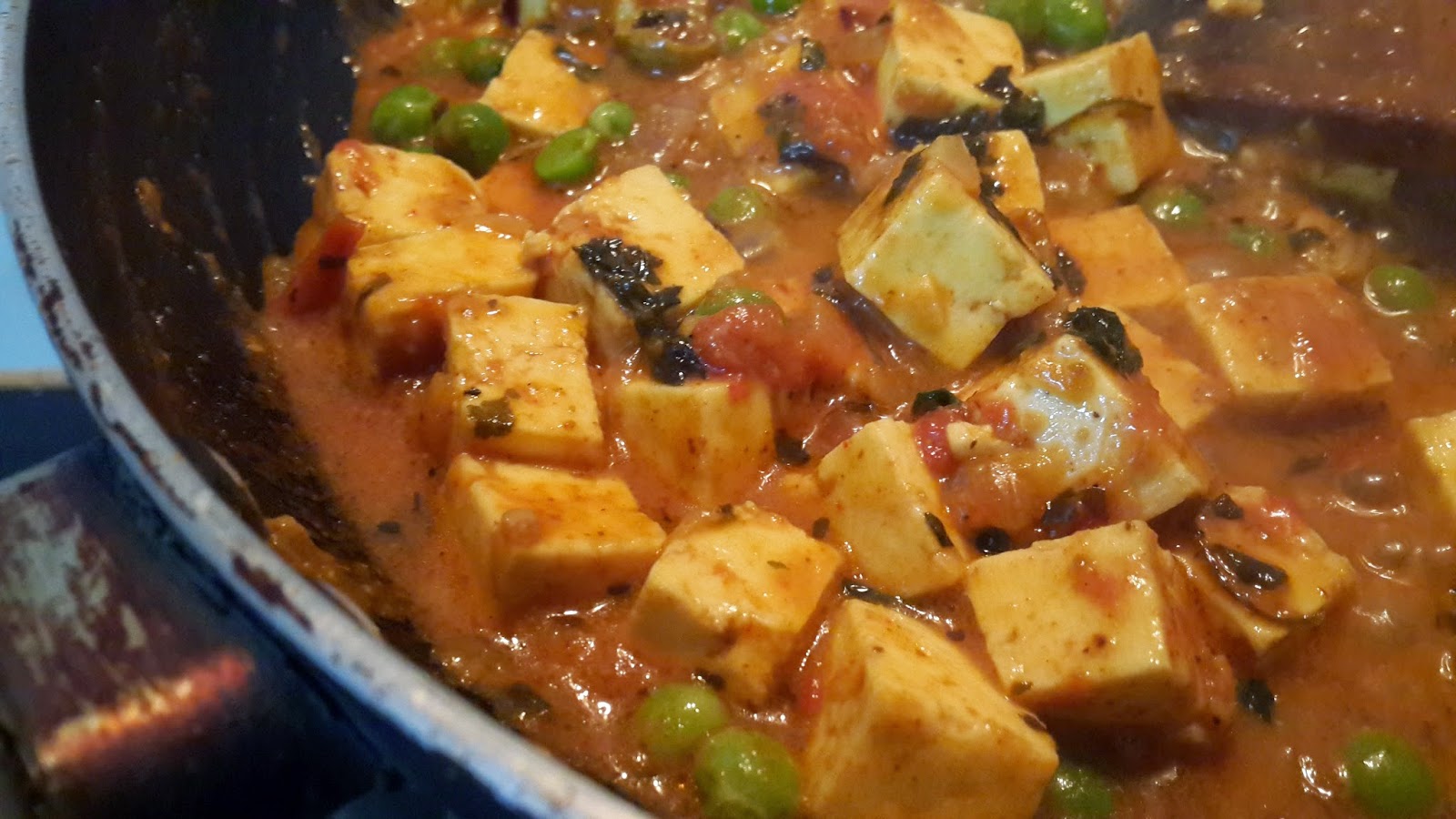 We have another of my favorites, palak paneer and paneer butter masala. They are fresh cheese cooked in a butter sauce with spices. We lick our fingers. In some places the sauce is better than in others. Creamy is how I like it, as some are too liquid. To my surprise that was heavenly. Palak paneer, besides being really exquisite (despite appearances), is suitable for the most sensitive palates.

It have not yet become accustomed to the widespread use of spices that occurs in this country. Palak paneer is a dish cooked with spinach in a saucepan over low heat. The result is a smooth, thick sauce, and like everything in this country is eaten with rice or alone, but always using the traditional roti or chapati as "covered". Although the less skilled can help us with a spoon!

In many occasions the palak paneer includes onion, ginger and spices in its preparation. Although, as I say, the result is usually mild and not unpleasant for those who still do not tolerate strong flavors .

Another similar dish, also with paneer as the main ingredient, is mattar paneer, which replaces spinach with peas. It is a very popular stew that you will also find in many thalis, although this time, yes, very spicy. An unmistakable flavor that will go straight to your palate!

The consumption of paneer is very widespread in India, because its high level of protein makes it the perfect complement in the vegetarian diet. Thus, we find the paneer as an ingredient in many dishes, as may be the pakoras, the dosa, or salads.

Today I offer you a way to play with Indian recipes made from paneer, but can also apply to the tofu, chicken, meatballs or potatoes, and also shrimp or fish. The paneer butter masala are tasty morsels of cheese drowned in a butter-based sauce, tomato, cashew and spices. Paneer butter masala is a must in Indian cuisine that is rich, succulent, sinful, with a plate delicately spicy that will capture the first taste.

Paneer butter masala is one of the most popular Indian dishes. For the uninitiated the paneer is the best known among Indian cheese, which is a cottage cheese with a more compact consistency. In India it is eaten fresh, or cooked on the plate, in the form of stew, grilled on skewers and much more. The paneer butter masala consists of a stew of this delicious cheese dipped in a creamy tomato-based sauce and spicy cashews.

If you want to try your hand in the preparation of homemade paneer you should click here and discover our recipe for a perfect cheese. Paneer butter masala is an excellent Indian vegetarian dish. The Indians, in fact, mainly vegetarian, do not eat meat stews but rather of cheese! The paneer, the only Indian cheese, is first fried and then stewed together with a delicious spicy sauce. The paneer butter masala is a great accompaniment with basmati rice or chapati, a traditional Indian bread.

Add cashew paste. Saute cashew paste till oil begins to leave the sides of the masala paste. Add water and simmer on a low flame.

Add green chilies, salt and sugar and simmer till the curry begins to thicken. Add the paneer cubes along with the peas, honey, milk, cream, and cook them for 15 minutes.