We continue the journey through all those culinary delights and its various incarnations around the world. Mumbai, the capital of Maharashtra boasts a surprising variety of food. If you plan to visit Mumbai at any time in the future, then you should definitely try Dhokla.

Whether vegetarian or non-vegetarian, there are a variety of different cuisines. On its way to becoming the commercial capital of India in a village known mainly for fishing, Mumbai has come a long way in terms of gastronomy. Moreover, people who migrated to Mumbai from different parts of India in the hope of realizing their dreams, have brought with them gastronomically delicious gems that have contributed to diversity.

You can find a sizeable population of Gujaratis residing in Mumbai and that is why their favorite snack Dhokla has gained popularity like no other. This vegetarian dish is very simple to do as it is made from fermented chickpeas, hot spices, and ginger in a closed container. In order to enhance its flavor chilies and mustard seeds are added. Then it is cut into small pieces. It is served accompanied by green chutney or peanut butter.

Dhokla comes from the region of Gujarat, though its popularity spread across India. While the basic recipe remains essentially the same, the taste can be different with cottage cheese, yogurt, cheese, and a wide range of spices. This is a snack that is commonly found in sweet shops.

After fermentation, spices such as ginger and chili and sodium bicarbonate are added to the mass. The mixture is steamed for a few minutes. Then cut into pieces and fried with mustard seeds. The frying process is completed when the seeds begin to crackle and pop. Then the plate is seasoned with chopped green chilies and grass with similar leeks called asafoetida. 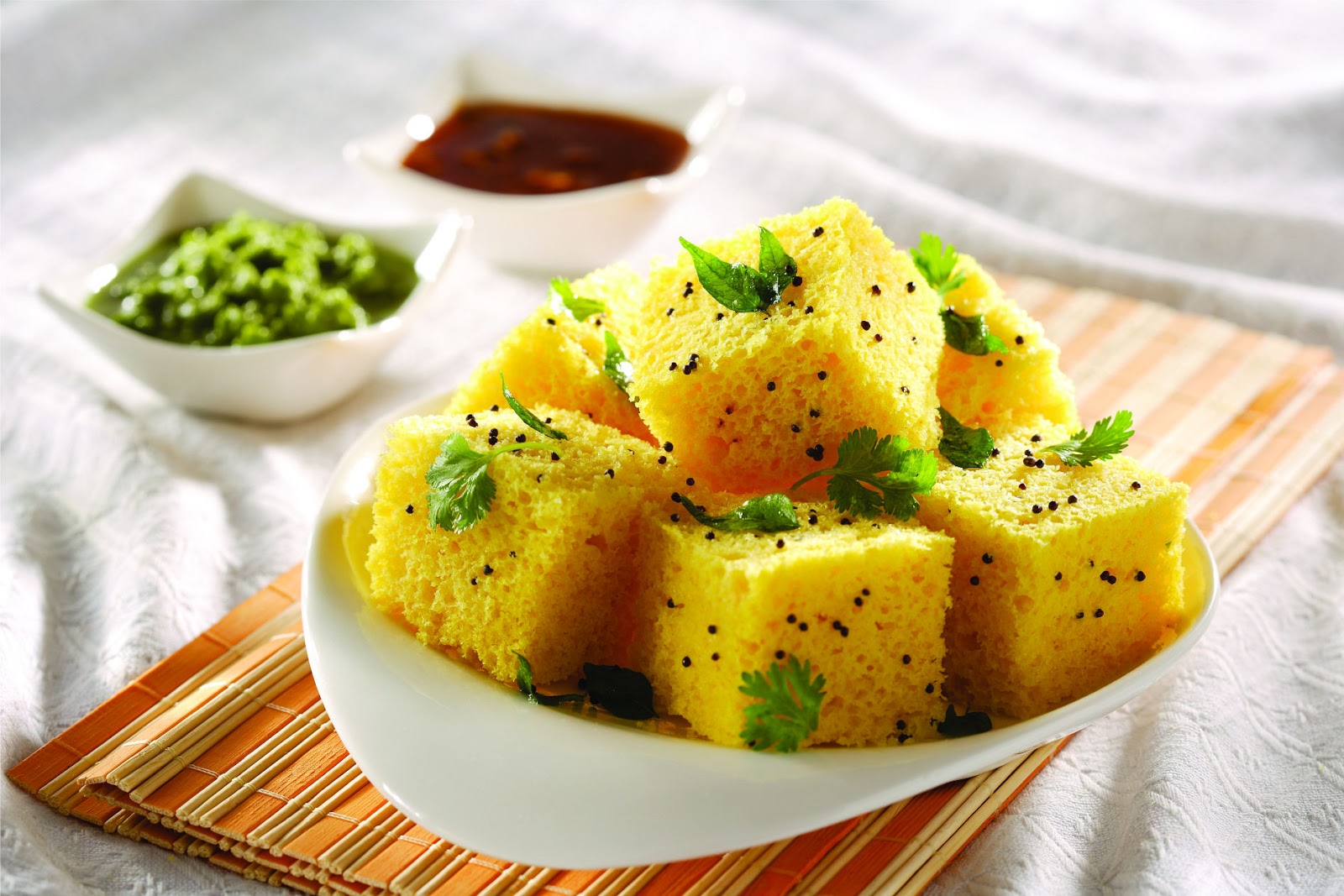 In some recipes, a mixture of water, sugar, and oil is poured into the dish. Dhokla is often garnished with coconut and cilantro. Also often it served with chutney and fried peppers.

Dhokla recipes vary from family and region. Instead of chickpea, lentil could be another variety, as ur, also known black grams. The dish can be prepared with paneer cheese and is used as a sandwich filling. Khatta Dhokla is a version with sour curd. Rasiya Dhokla contains a dramatically different spice mixture, including tamarind, jaggery, and garam masala.

The dish is often confused with Khamman Dhokla, a similar snack with chickpea batter. The main difference between the two is that there is no rice in the basic recipe and is not fermented. Khaman Dhokla is also flavored with chili and mustard seeds and garnished with coconut and cilantro.

Gujarat consists of four main areas of North Gujarat, Kathiawar, Kachchh and southern Gujarat. Gujarati cuisine is predominantly vegetarian, with a variety of recipes through these regions. Common dishes tend to be made up of a mixture of spicy, sweet and salty flavors.

It is also common to find street stalls offering naan or roti (two types of flatbread) with curry or dhal (vegetable stew). A very popular traditional "snack" are the samosas, stuffed potato dumplings fried triangular, minced meat, spinach or cheese and served with sweet or spicy sauce. The Indian diaspora and the popularity of its cuisine have made it possible to taste almost all these delicacies in many other places in the world, from America to Australia, and of course in the UK.

The Khaman dhokla is a vegetarian dish originally from the Indian state of Gujarat. It is prepared from a fermented paste of broken chickpeas. The dhokla can be eaten for breakfast or as a main dish, side dish or snack. The dhokla is very close to Khaman and the two terms are used interchangeably.

The dukkia, a precursor to legume based dhokla, is mentioned in a Jain book dating from 1066. The oldest existing text mentioning the word dhokla is Varanaka Samuchaya written in Gujarati in the year 1520.

The Idada is another variety of dhokla which is made using other legumes such as black gram.

Sieve the gram flour. Mix it with the yoghurt, ginger and green chilli pastes, turmeric powder, salt to taste, 1 tsp oil, lime juice and sugar and warm water to make a batter of pouring consistency. Mix well. Divide the batter into 3 equal portions. Keep aside to ferment for 10 hours.

Prepare the steamer and grease a pan to steam the dhokla in. Divide the baking soda into 3 equal portions and add one portion to the batter and 2 tsp of water. When the bubbles form, mix well. Pour this batter into the greased dish and put it into the steamer. Sprinkle black pepper powder evenly over it. Steam in a steamer for 10 minutes or till the dhoklas are cooked.

Repeat with the remaining batter, adding the baking soda to each batch of batter just before steaming. Allow the steamed Dhokla to cool slightly and cut into diamond shaped equal pieces. To temper, heat the oil in a wide pan and add the curry leaves, mustard and sesame seeds and green chillies. Fry till the seeds stop spluttering. Pour these into the warm water. Sprinkle this mixture all over the prepared Dhokla. Keep aside for 10 minutes.

Garnish with the chopped coriander and serve with Tamarind Chutney and Mint Coriander Chutney.