We had breakfast at the hotel with chole bhature. Here they accompany it with a spicy curry, but we take honey. The breakfasts at the hotels in Delhi are very peculiar. The western options like toast, juice, cereal and omlet are quite poor. We are given to try everything that we are put in front.

When we finish breakfast we go down to the reception to wait until our driver arrives to pick us up. Today we have a very busy day because yesterday we left several things without seeing because they were closed. Our first stop is the Red Fort of Delhi, which is so called because of the color of the sandstone with which it is built.

Here lived Shah Jahan, who will sound to you because he is the same one who commissioned the Taj Mahal. After burying his beloved, he came to live in Delhi, rather to Shahjahanabad. It was the seventh Mughal city that was built in the area that occupies the current old Delhi.

We regretted right away that we did not pay attention to our driver and limited ourselves to seeing the fort on the outside. Inside it turns out to be disappointing. Perhaps if they had the sources that there are around the enclosure with water it would be something else but as it is, it is not worth the trouble at all.

Especially after having seen places like the ones we've seen so far. The audio guide, which we also take, is in line with all of here. Someone should rethink of updating them because they are pretty bad. Upon leaving, we take the car and go to the Swaminarayan Akshardham Temple. It was inspired and developed by Pramukh Swami Maharaj where more than 3000 volunteers and 7000 artisans participated in its construction.

The materials used for its construction were marble, sandstone and gold leaf. It is the largest temple of the Swaminarayan faith, one of the sects of Vaishnavism. The interior of the Mandir, the main building, is full of golden statues and beautiful carvings of different gods in an impressive work.

The outdoor area, with gardens and fountains, is perfect for walking. One of the zones, that of the playground, emulates an immense lotus flower. It also has a restaurant area at a more than reasonable price. The entrance to the temple is free and closes on Mondays. We cannot go with anything electronic inside (camera either).

Possibly this is one of the visits that have surprised us most to date. We had not heard of this place before coming and it is extremely spectacular that leaves us speechless. The next place we visit is Agrasen ki Baoli. Although there are no historical records, it is believed that it was built by King Agrasen and rebuilt in the 14th century by the Agrawal community.

The concept is the same as that of Chand Baori, but this is something smaller and has 108 steps. As a curiosity, our driver tells us that some scenes of Batman were filmed here. And, finally, we arrived at the famous Lotus Temple, a symbol of the city. It was built between 1980 and 1986 and, contrary to popular belief, it is a Baha'is temple.

This religion defends the integration of all religions. Inside the temples are the sacred scriptures of any faith, but it is not allowed to give sermons, perform rituals or play instruments. The interior of the temple is circular, as established by the Baha'i scriptures. In addition there are no figures or pulpits, also prohibited in the scriptures.

Surprisingly, since its opening it has become one of the most visited monuments in India, surpassing in number of annual visitors to the Taj Mahal itself. Actually the temple is very beautiful, especially seen from the gardens where it truly resembles a Lotus flower. The really incredible must be the aerial view of the place, although I'm afraid we'll stay with the desire.

The last stop is the Qutub Minar, the tallest brick minaret in the world and the oldest Islamic monument in Delhi. Construction began in 1193 but was not completed until the year 1368 by Firuz Shah Tughluq. It is built in red sandstone, carved with various figures and verses from the Koran. Its original function is not known for sure.

It could have been designed as a minaret for the mosque next to which it is located or as a defensive or victory tower. The site leaves us impressed. It was built on a temple and it is still possible to see the carved figures of the gods with their faces erased. The complex in general is spectacular and the tower one of the most impressive things we have seen in Delhi.

At about 4 in the afternoon we feel hungry. Our driver takes us to eat at a place he knows near Connaught Place, where he says they make delicious malai kofta in New Delhi. Being as passionate I am about cooking it was obvious that gastronomy was going to be one of the strong points of the trip.

This is possibly my favorite Indian food dish. It tastes great and the best I have tried. It is a creamy and very soft cream in which vegetarian meatballs (koftas) are submerged. It is absolutely essential to try this dish because it is indescribable how rich it is. When we finish we return to the hotel to take the taxi to the airport.

Something happens when I leave a place. Suddenly, the last moments become important. It is as if all my senses are aware that everything around them is final. As if it began to become relevant what until then had gone unnoticed. And this is how that bus full of passengers stays engraved in my eyes.

The sound of the horn penetrates my ears in a much more conscious way. The smell of incense permeates my nostrils. The taste of that last bite remains suspended in my palate. My hands are determined to touch everything, to take something as intangible as a country turned into something as volatile as touch.

Somehow, I want to keep everything and fill myself with everything around me so as not to lose, to take the part of me that this land has molded and turned into experience, into memory. And the city is staying in my memory. It is tattooed on my skin. And when the plane lands in the place from which days before I left, I know that it is not the person who left who returns.

There are many recipes for making Malai Kofta and they are all tasty. However, we can make it healthier. Here is a healthy and delicious version. 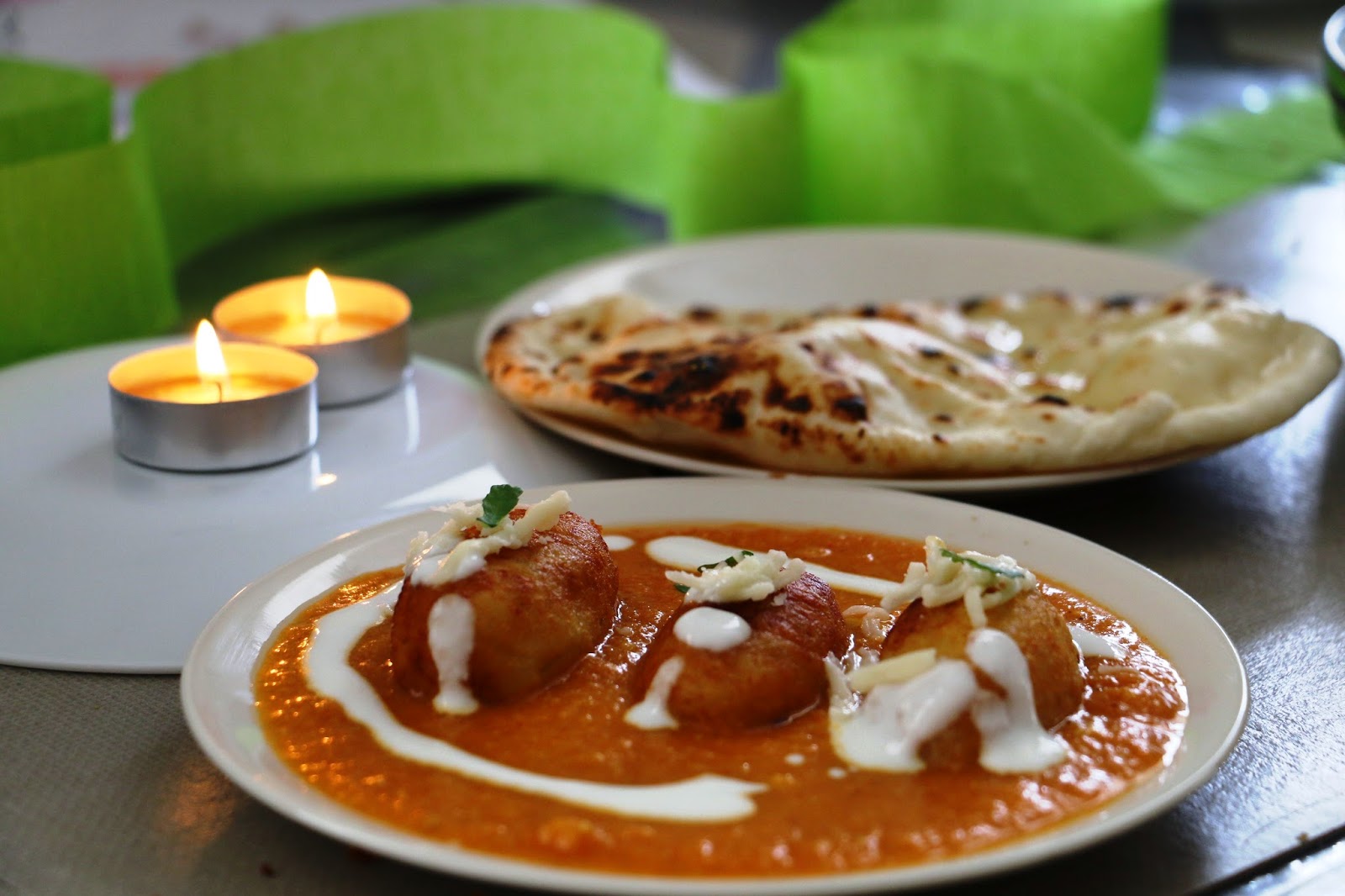 Peel the potatoes and mash them in a bowl. Drain the paneer by putting it in a fine cloth or double muslin and squeezing it well until the water runs no longer. Crumble the paneer with the potatoes. Add the rest of the ingredients except the flour and oil and mix by hand until you get a manageable dough. Shape the koftas by taking portions of the dough and shaping them into a ball the size of a walnut.

Heat in a deep frying pan with plenty of oil to fry over medium-high heat. Mix the chickpea flour with the water until you get a kind of white cream, rather liquid. Pass each kofta through this flour mixture and quickly put it in the hot oil. Fry the koftas 4-5 minutes, stirring occasionally to brown on all sides. Remove them with a slotted spoon to a plate lined with absorbent kitchen paper.

Wash the tomatoes very well, cut them into quarters and pass them through the blender until they become a fine puree. Heat the 2 tablespoons of oil in a nonstick saucepan or high skillet over medium heat. Toast for a few seconds and add the tomato puree, salt and sugar. Mix well, cover and leave on medium-low heat for about 20 minutes, stirring and monitoring occasionally. If you see that it dries or sticks, lower the heat a little more. It is ready when it begins to separate from the oil. Add the turmeric, coriander powder, grated ginger and madras curry powder to the tomato and mix well. Put it over medium-high heat.

Mix the wheat flour with the unsweetened and flavored soy yogurt in a bowl until there are no lumps and add it to the saucepan, mixing it very well. Slowly add 1.5 cups of hot water while stirring so there are no lumps. When it begins to boil, put it over medium-low heat and cover. Let it boil for 5 minutes. Add the koftas and cilantro, mix well being careful not to break the koftas, and let it boil together for another 3-5 minutes, covered. Taste it and add a little more salt if you see it necessary. Remove to a platter or large plate and serve.