Sicilian cuisine is rich and diverse and one of its most recurrent dishes, arancini, are orange croquettes of rice paste. The official name is Arancini di Riso or rice balls. It is debated whether the rice balls should be denominated in the feminine (arancini) because arancia, like orange, is a feminine term. But it turns orange in Sicilian, arànciu, is masculine.

Already in the Italian-Sicilian Giuseppe Biundi dictionary in 1857 defined the arancinu of the Sicilians as a sweet dish made of rice and an orange. But what then was sweet? There are many doubts. Currently, the arancini, sometimes called croquettes or dumplings, are a traditional Italian preparation that is lesser known than pizza or pasta.

The arancini is a typical dish of the city of Messina, where it probably originated, that were prepared on the island around the 10th century during the Ottoman empire. Also, in Catania it is normal to find arancini with eggplant, also called alla Catanese. The soft filling contrast with the crunchy exterior. I will never forget my first experience with Arancini. The experience was unique, I did not expect that within this crisp ball I would find a creamy rice dough and melted mozzarella. 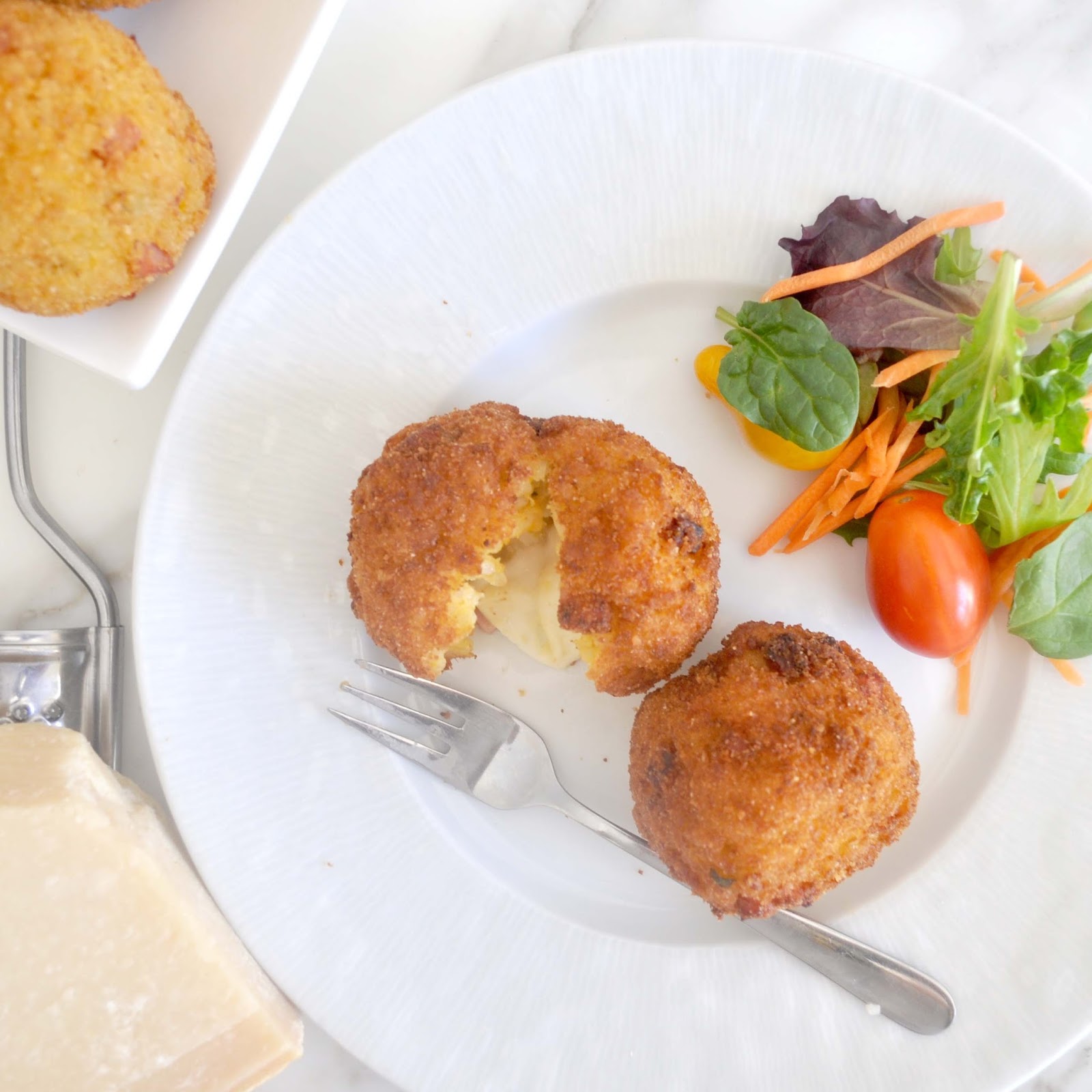 Arancini owes its name from the orange color of its exterior appearance (like a stuffed potato pie). Because it has saffron that gives it that "orange" hue (in Italian oranges are referred to as arancini). Known as arancini, arancinu or arancia a traditional preparation of Italian cuisine, it is said that its origin is in Sicily. It is basically rice balls stuffed with meat, tomato sauce, peas, and mozzarella. They are coated and fried in olive oil, or, al Forno, although this is less common.

It is a dish that can be found anywhere. They are large balls of 8-10 cm, and inside they can have ragout of veal and peas or other ingredients made with tomato sauce or mozzarella. They are usually taken there as an appetizer and sold in pastry shops, bars and even on some beaches as they also serve for a light lunch or a dinner accompanied by a salad. For most tourists, this is street food because you never really ask for arancini in a restaurant.

But for the Sicilians, they are an emblem of their gastronomy, cooked with time and love for their mothers and grandmothers. Everybody knows someone there who makes the best arancini. The most read author of Italy, Camilleri, whose detective novels 'Montalbano' gave rise to a famous series of films, wrote a novel around this dish. In 'Gli arancini di Montalbano', the detective goes through many things to make sure that he can accept the invitation to dine arancinis on New Year's Eve at the home of the mother of one of his informants.

According to the traditional Arancini recipe, the pork is prepared the day before or it is cut into equal parts. They have to be cooked over very high heat for hours on end with onion, tomato, celery, parsley, and basil. The next day the rice is cooked, the one called Milanese, poured on a board, kneaded with eggs and left to cool. Meanwhile, the peas are cooked, the béchamel sauce is prepared, a piece of sausage or chorizo is minced and mixed with the minced meat in a bowl, all by hand.

The preparation of the rice balls is done, throwing in the palm of the hand, the amount of rice from a dessert spoon and then a ball is formed. Each ball must be left to roll in the flour, then it is passed in the egg white and in the breadcrumbs. Then fry in a pan with oil until you get rice balls of the color of old gold. The oil is absorbed in a napkin and to eat! They are also made pear-shaped.

It is common in many cuisines that take advantage of leftover rice, for example, risotto, for arancini, but it seems that it is usually made from Milanese rice.

The most popular arancini are round. But as we mentioned at the beginning, there are also pyramid-shaped or cone, some say it is to differentiate fillings and also argue that the shape is inspired by the Etna volcano, cut the top tip vapor inside out, which would simulate smoke, tomato sauce you could see represent the lava.

The arancini is a specialty of Sicilian cuisine. In fact, the word arancini in Italian means naranjita. It is a kind of croquette with rice as the main ingredient that have an orange color due to the use of saffron. It is served hot and is usually served as an aperitif, appetizer or as a snack and may be accompanied by a little salad to taste. The arancini is a typical dish of the city of Messina, where it probably originated, that were prepared on the island around the 10th century during the Ottoman empire.

The idea is to form a kind of rice ball stuffed with various ingredients. Depending on the region there are variations in shape and filling, but the most classic is ham, cheese, eggplant, ricotta, beef ragout, veal or a bolognese sauce, peas and mozzarella, although we could fill them with anything else and they would look great.

The pear-shaped arancini is typical of the area of ​​Ragusa and with its shape make a reference to the Etna volcano. It is usually shaped like 8-10 cm diameter balls. Also, in Catania it is normal to find arancini with eggplant, also called alla catanese. The soft filling contrast with the crunchy exterior.

The fictional character Commissioner Montalbano, protagonist of a series of novels and short stories published by the writer Andrea Camilleri, usually tastes arancini and thanks to the book has been one of the main contributors to internationalize this dish. The commissioner goes through a thousand and one adventures to get arancini dinner on New Year's Day with the mother of one of his informants.

These rice balls are an icon in Sicily, where you can buy and eat arancini in all the bars and stalls, as well as in the rotisserie, very popular stores where, in addition to arancini, you can enjoy calzone or pizza.

Place rice and 6 cups of water in a large saucepan and bring to a boil. Reduce heat to a medium-low and cook covered, stirring often, until water is absorbed. Transfer to a large bowl. Set aside until completely cooled.

Heat butter in a large pan and fry rice with garlic until golden and fragrant. Add wine, saffron, and half of the water. Stir and simmer on low heat until the liquid is absorbed. Add remaining water, tomato, and salt. Stir until the liquid is absorbed. Stir eggs into rice. Mix in half of the cheese and transfer to a bowl. Leave until slightly warm.

Smash the mixture slightly and shape into 4 balls. Make a hole into each ball and fill with cheese. Seal the balls around the cheese and roll into bread crumbs. Heat oil in a frying pan and using a spoon, gently lower one rice ball at a time into hot oil. Fry the balls, until golden brown and crispy from all sides. Remove from the pan and place on absorbing sheet. Serve hot.