Back from Brühl, we went straight to the hotel where we "preened" and we got ready to celebrate New Year's Eve and the arrival of the New Year. In Germany, they simply say celebrate the night of Silvester. We were going well since we arrived at the hotel at 5:30 p.m. and had a reserved table at 7:30 p.m.

That allowed us to take a quiet walk and see the illuminated streets to the restaurant where we would dine and that we found through the internet. They offered a buffet of German food and glass of wine.

When we left the street it was deserted (it was 7:00 pm) and we thought that in this city the celebration of the New Year was going to be a "dud". Inside the houses, there was no music, no laughter, nothing at all. There were no cars and all shops and bars were closed.

The lighting of the streets was simple but pleasant. When we arrived at the restaurant we almost felt relieved to see that there were already people inside.

The place was decorated in a traditional German way and the employees were dressed in the regional dress. We were seated at a table decorated with candles and Christmas decorations. They offer us a welcome drink since the buffet had not yet been prepared. So far so good, but no music, no one having fun?

We felt so quiet and more when we found that the place had all the tables full. But the audience seemed to have gone to the movies rather than a New Year's Eve dinner.

Like everyone else, we had taken the welcome drink. The people and ourselves started asking for beer mugs since we still had no food and what happened? Slowly people began to cheer up, laugh and talk louder and louder. Even a Swedish couple that was by our side began to engage in conversation with us. 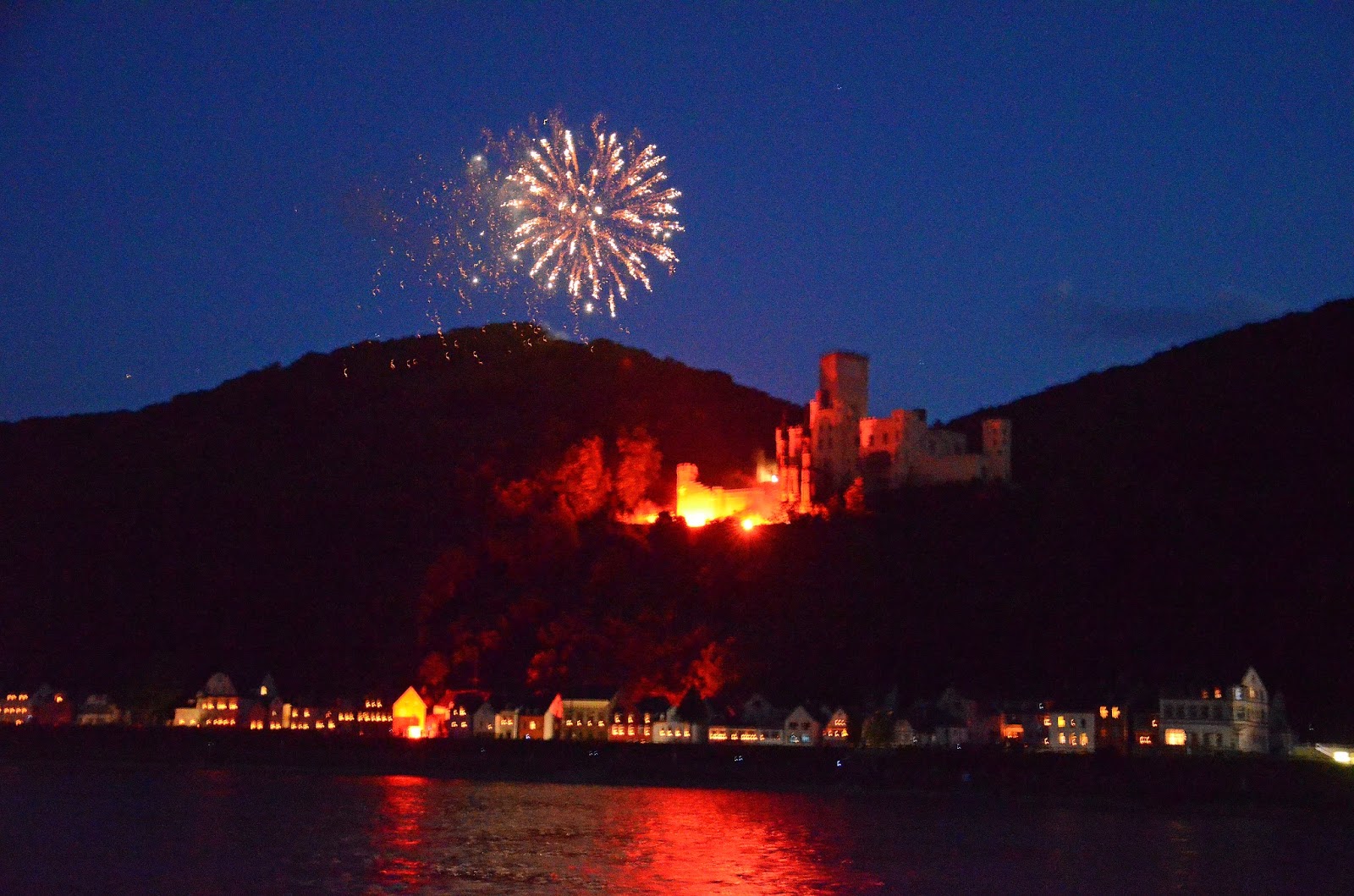 Finally, an hour later around 8:00 pm the buffet opened and the music started to play, but in a very subtle way. It was nothing high. The food we can not qualify as sensational, but it was quite good, especially the roast meat that was cut at the time and in sight.

To us, it was enough with a plate of different side dishes and another with meat and "kartoffelsalat". We spent our time chatting like Tarzan with the Swedish couple, waiting for the desserts to come out. Once they did, we gave a good account of them and asked for the bill for drinks and coffee that were not included in the buffet payment.

Around 21:30h we went to the discotheque in one of the premises of the Town Hall. There we had to wait due to a large queue of people to pass and security checks. We had booked it on the Internet. They announced it as the best place to see the fireworks that would celebrate the New Year on the banks of the Rhine. We thought it would have balconies or terraces to see it and if it was raining or snowing we would be sheltered.

We were also encouraged by the fact that a DJ was going to mix music from the 80s with current music and the price included a drink (which later was a thimble).

They put a stamp on our hand and we realized that it was to go out and see the fireworks and come back. It was not going to be able to see it from the building. In short, the night was nice and it was not as cold as we expected.

For years we were not going to dance to a disco, but the atmosphere and attitude of the people do not change much. Maybe now it takes a lot of Jason Statham style for the gym guys, with shaved hair, white shirts of two sizes less and thin tie. The girls opted mostly for the short dress and heels.

But we did not feel out of place because there were people of all ages. We were lucky enough to take a seat in one of the amphitheaters and from there we were having a good account of the people who "excelled" on the track. We could also dance without stress and enjoy the good music they put on.

And it was time to leave at midnight. People gathered to leave but in an order. We went down the stairs and left like everyone else in the direction of the Kennedy Bridge to see from above the fireworks over the Rhine.

People carried rockets, firecrackers and pyrotechnic devices that began to explode practically wherever they pleased. We looked at our watches and it was really 00:00. We immediately uncork the bottle of champagne and gave a first hickey wishing us happiness for the new year.

The show was incredible. It was one of the most impressive we've seen. The Rhine was almost on fire, with noise and light coming from everywhere. The boats circulated with people inside celebrating the event. On the banks and on the bridge they did not stop firing rockets. The police only expected an incident because they did nothing to prevent them from throwing themselves with some care. It was both an extraordinary spectacle and a dangerous one.

There each one took care of themselves and we realized that the whole city of Bonn woke up from the lethargy of its normal and slow life. After an hour without stopping of explosions of light and color, hundreds of bottles and remains of pyrotechnics began to accumulate in the streets. It was time to go back to the hotel and not tempt to fate.