While I was coming to Calcutta, on the flight, I was thinking about the heat. The damp, sticky heat, which stays trapped between the skin and clothes, tangled in the hair, determined not to leave. One may think that, well, it is August, it is normal. But it's not like that. It is not a tropical heat either.

To get to the city, I take a taxi in the airport taxi booth. As soon as I get into the taxi, the first thing I see is that, of course, there is no air conditioning. The windows are always open. As the taxi driver drives to the city, stumbling and zigzagging, I try to distract myself and enjoy the scenery. But the car is going too fast, and with the stops and jumps of the road bumps, I am afraid that the camera will fly out the window.

Finally, the car stops. There is a traffic jam. Now I can take the photos I want, because I do not know how long you will be standing there. Occasionally the driver starts the car. A tune seems to come from speakers installed at the traffic light. It is a sweet and repetitive music.

I do not understand the words but a mystical and reassuring feeling comes to me. Suddenly, the taxi driver, a pot bellied man with a mustache wearing a gray uniform with patches, begins to play the mystical song from the radio. Curious, I ask him what he plays. He answers something that sounds like rabindra sangeet.

Park Street is a symbol of the city of Kolkata. One of the favorite destinations of tourists from around the world, especially during the Christmas season, Park Street offers a huge amount of possibilities and attractions, which includes museums, pubs, nightclubs, five star hotels, bookstores, cafes, historic as well as modern restaurants, fast food hubs, music stores and parks in and out.

I went to Calcutta via a low cost airline, not without having been able to rest a little at the lounge of Mumbai. So I arrived in Calcutta without a hitch, just a few hours late from our initial schedule. When I arrive in Calcutta, it's a real leap in time, not so much the airport that is modern, but as soon as I see the famous yellow taxis, and travel the first few kilometers.

Seeing these old buildings dating from the colonial era falling into ruin makes me think of Yangon in Burma. I do not know what to expect, to see it there under these eyes. It is clearly different, at this moment. I have difficulty to understand how it is humanly possible to live in these conditions. So I see cows, trash, brothel, a lot of people and a concert of horns which is only the beginning.

My hotel was in the Esplanade. The mission of the day for my taxi is to take me there and what a mission. Suddenly, our driver, not finds himself asking his way several times. I was insisting that we be taken to our destination, I did not want to find myself somewhere in Calcutta, as good as my sense of direction.

Fortunately, we will eventually find someone who knew the hotel and finally arrived at our pied-a-terre. The entrance is quite discreet behind a staircase. I see a old elevator that can barely take 2 people. But the room is fine. The staff present arranged my train for Bodhgaya for the next day. After a good shower and a nap, I finally went out on the street.

I walked aimlessly in the first direction that came to me. I land at the Kolkata Municipal Corporation Headquarters, a municipal building dating back to 1876. It, as the name suggests, houses the city's administrative services and infrastructure management. When I sees the old dilapidated hotel just across the street, I think they do not miss a job.

At the end of the Hogg Street, I see the New Market in Lindsay Street which is in fact the oldest municipal market of the city. I walk on to the Oxford book store under the porch of Park Mansion. In the radius of the guides I look for a map of Sundarbans. I see a map of Bengal where I can see more details than in my guide.

I notice that the field of fine books is developing. The photographic works on India are more numerous than before but still very few books on Calcutta city yet very photogenic. In passing I stop to take a apple crumble cupcake and tea at the Flurys. It cost me more than the meal but it's quiet. It is the rendezvous of the golden youth and intellectuals of Kolkata. I enjoy the calm with the story of tea painted on the wall in front of me.

In fact my neighborhood, Park street is a street where there are many luxury shops, a big avenue then crowded for the festivities. I returned at 3 to take a shower and I fall asleep immediately. Walking back to Park Street I stopped in the very romantic Park Street Cemetery. In a totally different style, there was once again a very special atmosphere.

Located in the middle of a town in a square of forest that has survived the urbanization, this cemetery, which has been abandoned for almost a century, is home to hundreds of burials rivaling each other. From the size, originality of the form, or the location, nothing distinguishes the eternal home of a newborn from that of the Marquis of Hastings who was once the governor general of India.

I resume my walk to Russel Street. I leave when police officers approach me, asking me to follow them and tell me that photographing is prohibited in the area. Indeed, an official building was on your right. One of them wants me to show him and delete the picture. I try to explain to him that it is a film camera. I show him the viewfinder. The other more conciliatory policeman explains to his colleague that it is an antique camera and I get away leaving my name, address and the mention of antique camera.

At lunchtime I had lunch at Peter Cat in the Park Street area, an establishment frequented by the middle class where one queues to have a table. Here the menu is not vegetarian but rather very meaty, and the map of spirits, beers and wines is as consistent as the menu. Low chandeliers above each table create a cozy atmosphere. The waiters are all dressed in Afghan style. I order its famous Chelo kebab and pulao rice with a lemon soda and a black label.

At tea time, in the chai shop, a talkative Bengali holds my leg for half an hour, and gives me a little lesson on the economic problems and the expatriation of firms to China and communism in Eastern Europe. He explains to me with disconcerting ease that it is a natural selection.

At dinner after crossing Camac Street I went to Hakuna Matata located in a posh shopping arcade of chic boutiques, bars, restaurants and a movie theater. In the menu they have aloo phoolkopir dalna prepared with cauliflower and peas in a curry just strong enough. There is daab chingri with large shrimps served in half a coconut cooked in a coconut curry. There is also kaju kishmis pulao of fried rice with grapes and cashew nuts, slightly spicy. There is also a gondhoraj salad with tomatoes, cucumbers, peppers and lettuce, lemon.

The avenue is covered with Christmas decorations, garlands, lights. The crowd rushes, each wearing a Santa Claus hat, or red and black clothes.

Park street is filled with colorful fancy decorations, with the streets full of life and shops glow with their signs and showcases, while you travel a walk the sidewalks flooded with people. The Christmas in Park Street is a wonderful experience, with a merry bunch of festive people smiling even in the cold. On December 25, the streets are filled with crowds who celebrate in a very special way, waiting for the celebrations for the new year.

Under the dress of the lady, the area cultivates a energy which is much more radical. Heir to a mixture of cultural and underground culture, the street absorbs influences from UK, US to India. I stopped to buy records of Rabindra Sangeet written and composed by Ranindranath Tagore. The crowd spills as I arrived at the hotel. I listened to the songs of Tagore on my bed by candlelight drinking hot tea. 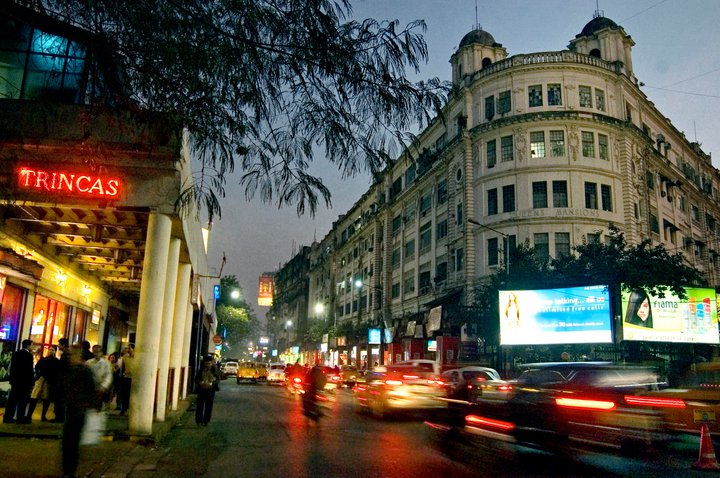