Another year passes. Before the winter arrives, I often travel to the mountains for 1 or 2 days. Last year, I was in Khajuraho during Diwali. This year I was in Kathmandu in Nepal. A fortnight after Bada Dashain, the Nepalese celebrate another festival of Deepawali, known here as Tihar in nepali. Second most important event of the Hindu year after Dashain, it is celebrated for 5 days throughout the country and beyond. It is especially the profusion of lights, all the houses being illuminated that makes the event so spectacular.

The Kathmandu valley is mostly populated by the Newaris, with very special rites and customs like worshipping the living goddess and many others. And Newari New Year is the fourth day of Deepawali and finish with the ceremony of Bhai Dooj in the fifth day in Nepal. The rainy season is over and the winter lets glimpse its first frost.

Kathmandu is an overcrowded city, and it feels like Mumbai and I think it's worse. In Mumbai, rickshaws are banned, but in Kathmandu, there are only rickshaws. I reach Durbar Square at 7 am. Durbar Square is always a delight. Swarming with people all the time, it is a central place for festivals.

The royal city attracts and brings together all that can be seen surprisingly. It is the full tourist season and the tourists are all over. Urban chameleons, and fugitive shadows that blend into the landscape, pass quickly. Time flies, and festivals too. As in India, religious life is a pillar of the social order.

In the first day, a big ceremony takes place in Basantapur. While I sit in a cafe, I see a demonstration goes on the street with chants and drums. Women dance in the middle of the crowd. Red is the favorite color of women. There is of course the religious reason, but it associates so well with their complexion that I discern also a small part of coquetry.

Nepali, women as men and especially teenagers like to give themselves a style, to make a look. It goes from polo pants to the after-punk but it's done with taste. And the girls, it would be rather the Chinese mid-morning trip. They are small models, it suits them!

In the second day is Kukur Tihar, the day dedicated to dogs. The dogs are the guardians of the kingdom of Ramaraj. After having blessed them, people have them a delicious meal and we also participate in it. From chin-chin to his mummy to the dirty dog ​​of the street, all are entitled to preferential treatment. The creatures are daubed in red paste and powder and adorned with necklaces of flowers. In Nepali mythology, it is also a dog that crosses the river beyond.

I found one down the hotel, who followed me to my room and I let it in. The good dog stuck to me, lying on my feet or move around. I did not have the heart to put it out and it slept at the foot of the bed, in the most discreet way possible.

The third day is the day of the cows but also and especially the day of the celebration of Laxmi, the day of Laxmi Pooja. Laxmi is the goddess of possessions and prosperity. She is much loved. This day is the craziest. The goal is to attract Laxmi to every house with light, songs, dances, decorations and simple tricks.

The girls dance in front of the shops to attract luck. In front of each door, the most artistic lady in the family draws a beautiful rangoli. It is is made of a mixture of cow dung, dye and spices, then decorated with flowers, leading to every important place of the house, especially the family temple. A multitude of oil lamps also indicate the way. Each one expresses her artistic talents with a real motivation. 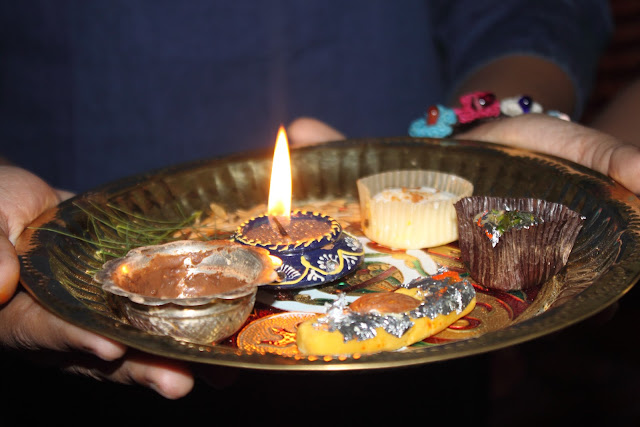 An unknown game! This man explains the rules to me. In the center, there are 3 dice that have a stick shape and are rolled on the big red carpet. One of the many activities taking place in the innumerable inner courtyards of the city. Each is a small shelter, a haven of peace away from the bustle of the street. There are still religious monuments, statues of gods touched 1000 times a day by believers in search of better days.

The fourth day is the day of bulls and oxen working all year to help humans. Today they are venerated and spoiled like other days dedicated to animals. The party is in full swing especially in the street with carts on vehicles or on foot, singing and playing music. It's a real madness, a cacophony of noise, smiles and joy. The exhilarating crowd bath these animals with love! The event is nevertheless also dedicated to death!

The final day is the Bhai Tika. That day, brothers who have a sister go to her house. They offer gifts, sweets and dried fruits. And the sisters draw the most beautiful tika I've ever seen made up of 7 vertical colors.

On their side, the brothers bring clothing and jewels. It is a day that strengthens fraternities and one of the rare days where the oldest can honor the youngest. And I live completely with locals. With the nepalis I merge in the mass. I have lots of friends and really lead a neighborhood life.

I fell in love with Kathmandu, although it is a polluted city, and it lacks greenery and then the sea of people, too. But I do not think there is another capital so balanced, where no one runs. The pace is slow, with a city on a scale of human time.

Although overcrowded but everything slips, and things are done smoothly, always with a smile. I decided to climb one of the peaks from where we can see Everest. Nepalese people like to smoke cigarettes and do not hide them. They often hold them wedged at the base of the fingers and suck through the hollow of their closed hand. We feed on dry food with puffed rice, grilled chickpeas, and raw Chinese noodles.

I then come back in India. It is Diwali that marks the arrival of the winter. The sun shines every day and we reach without problem!