Today is clear and the mountains look perfect, but from where we are there is not a good view. We climbed to the roof of the hotel and got to see something. Not the full view, but the individual peaks. Still, with that we content ourselves. We prefer to stay with the good side of this bad luck that we have had and it could have been worse: we could not have had today or the day clear.

Our bus departs at 7:30 and we have to go to the station, which is 20 minutes away. It is not the station that we arrived at. It is another one that they call tourist station and that is in the direction of Davis Falls. Ironies of fate, from there we can see the peaks perfectly. In the end, we leave with a good taste in the mouth.

The station from which the tour buses depart to Kathmandu is not the same as the one they arrive at. We ask about the tourist station. This time we travel in buses that are slightly better than the other day and the price is the same. Also, they give us a bottle of water, so we were so happy.

All in all, the route gives for what it gives. The roads are bad and full of potholes, so we go all the way stumbling. We stopped to eat halfway in a roadside bar, where we had a chowmein. In total, they make three stops, one hour between the three. We arrived at 16:30 to Kathmandu (9 hours to travel 200 km).

We go to the hotel that we booked the last day here. The receptionist, who is not the same as before. To our surprise, the room is much better than the one we were shown the other day. It is much larger and with air conditioning.

After leaving the luggage we went for a walk and we found a kind of Diwali procession. There are many people, all with typical Nepalese costumes, accompanied by drums and songs. They carry candles in their hands. It is amazing. They occupy practically all the center of the city. Although the strangest thing of all is possibly that they have not cut the traffic and the motorcycles continue colluding between the people in spite of the agglomeration that there is.

The festival of Diwali in Nepal is also known by Tihar. It is the festival of light. The girls represent the goddess Taleju, the same ones who believe that she occupies the body of the Kumari. We left a bit of Thamel for dinner. We have fried rice and aloo paratha.

The city is still very lively and full of people. It is also very bright, something that contrasts greatly with the Kathmandu we found on our arrival. It seems another place. We think that even there are fewer cars than usual and everything is cleaner. Possibly because, we see, people are cleaning the closures and windows of their stores. Then we learn that everything is part of the Diwali. 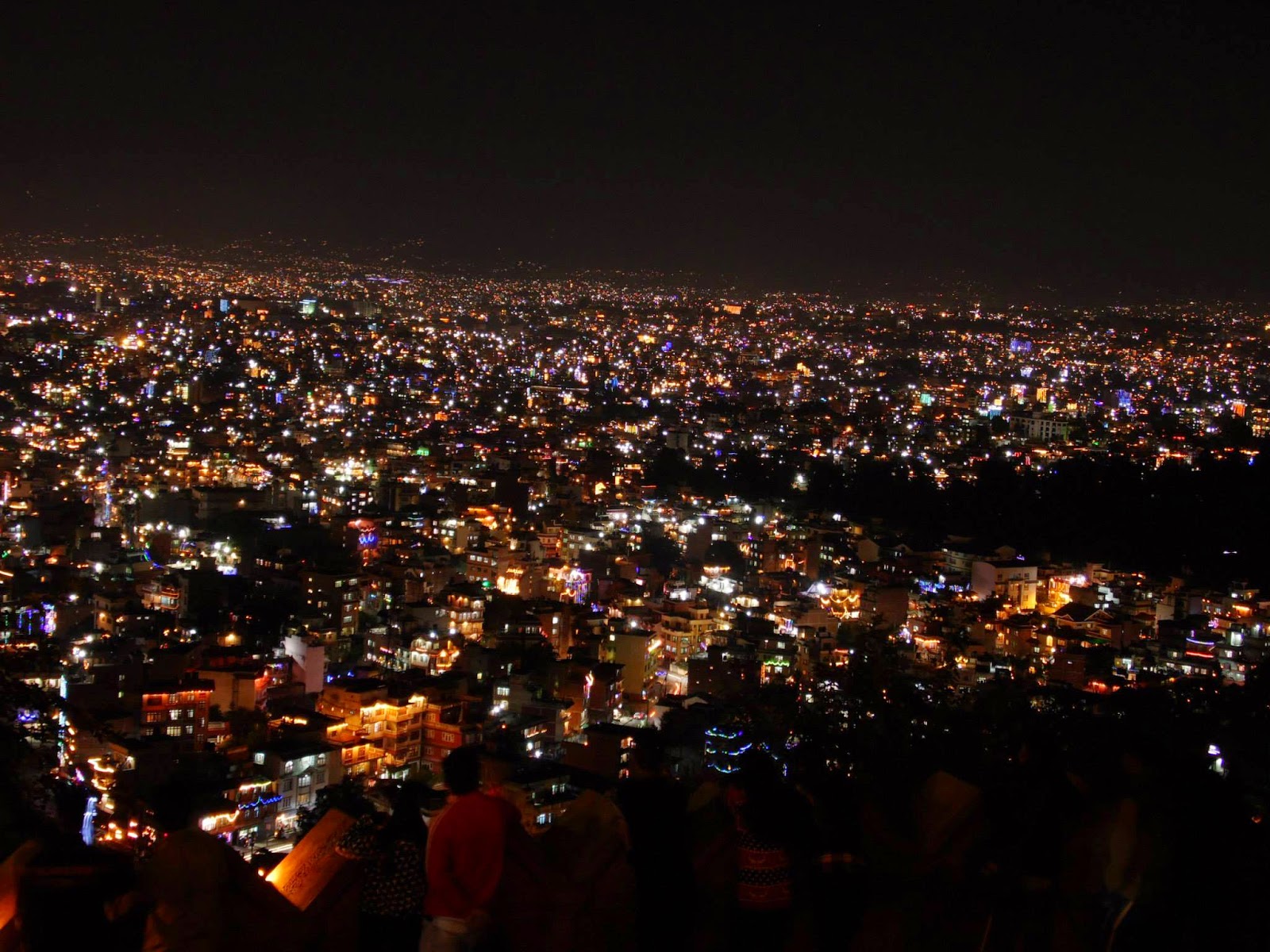 We have breakfast near hotel with masala chai and some rolls. The masala chai is great. They have it everywhere and we have become very fond of it. Normally they have two options of black tea or milk tea. The first is alone, with sugar. The second, same but with milk. I prefer the second, but the truth is that both are very good.

We go to Ratna Park, which is the place from which buses leave for Bhaktapur. It is not very complicated to find the right bus. We just have to ask and they immediately lead us in the right direction. The bus takes about 40 minutes to arrive and, curiously, we are the only tourists inside.

When we arrived in Bhaktapur we paid the entry fee for entering the city's surroundings. It seems an exaggeration, given the standard of living here, and we know that many tourists sneak in, but we do not think it is ethical to do the same. When we have been inside for a while, we are happy with our decision.

The place was badly damaged by the earthquake (although they have already begun to rebuild it and there are still quite a few standing). With that, if our money helps to rebuild the country, we are happy with it. We believe that it is necessary to be a little consistent in life.

It's funny because here, something that did not happen in the most rural areas of Nepal, children ask for money or candy in exchange for a photo. Obviously we refuse because we do not want to encourage that way of life.

We tried the famous juju dahu, typical here or, as they advertise, the king curd. It is a yogurt somewhat thicker than usual, similar to Greek labneh, but with a slightly citrusy flavor. It is very good. They serve it in a clay bowl that we can keep. Some people give it in a plastic container.

At noon, we take the bus back to Kathmandu and from there we link with the one that takes us to Boudhanath. Boudhanath is the Buddhist district of Kathmandu and has one of the largest spherical stupas in Nepal. It is amazing this place. It has a mystical air that, despite the amount of people there are, invites reflection.

In the vicinity of the stupa Buddhist monks and people pass by giving alms in a row (we understand that for some religious reason). There are even vendors who have bundles of small bills to give change. We go to eat at a place that comes out of an alley of the stupa. We tried the tingmo, a Tibetan bread and shabalay that come to be like momos but with another dough.

After lunch we visited the Peace Park relatively clean to be in Nepal. That's something that even surprises us. They also never have paper and rarely have soap. We return to Kathmandu. All the doors of the shops are decorated with rangoli, candles and, in some, food or flowers as an offering. In many they are still finishing making the rangolis and it seems a most laborious work. Some are really complex and beautiful. The city is amazing.

We go to dine with a girl whom we have met on Instagram and who, coincidentally, lives in our same street. We go around the city seeing the decorations of the shops before deciding on a Tibetan restaurant. We have not had much choice because we have been late and many shops have already closed. We dined with some momos and a bread with vegetables on top that is possibly the hottest we have tasted to date.

When we go out we wander a bit looking for a place to have a drink, but everything seems too oriented to tourists. I do not know how, we ended up in an alley after hearing typical music. It turns out to be a kind of private party, in the middle of the street, with people gambling, dancing and drinking. Then they offer us something to drink and they encourage us to dance with them.

It is something very curious because, from time to time, some of them throw money in a place that they have enabled for it. Everyone applauds and cheers. They also have a kind of song that they sing to encourage the one who is going to throw the money. They immediately include us in the group and even teach us to dance, although we are not given too well.

We contribute to the party, which we do not really know what it is for, but we think it's theirs since they have offered us to drink and they have accepted us as if we were one more. We had a good time with them and we said goodbye with great sorrow but with the feeling that our last night in Nepal has been perfect.