We have the last 24 hours in Mexico. For starters, Mexico is an excellent destination for the honeymoon. Our flight was the next day in the morning from Cancun. So we decided to spend the last night, which we had not reserved in advance in Playa del Carmen. This city is one of the most touristy in the Riviera Maya, but it is only an hour from the Cancun airport by bus.

We booked a room at the hotel by phone, a four star that had very good reviews on Tripadvisor and they give us the double room without breakfast for 850 pesos after haggling a bit. Early in the morning, we headed to the Mayan ruins of Coba. We climb the dizzying Nohoch Mui pyramid which at 42m height is the highest in the Yucatan peninsula. It is one of the few pyramids to which one can ascend. The views from above are spectacular.

It is a great mystery the similarity of the constructions of Coba with those of Tikal in Guatemala hundreds of km away and not with the nearby ones like Chichen Itza. They say it was probably due to a marriage agreement between both cities. From here we went to Tulum.

We got up not too soon and went for a leisurely stroll along the beach of our hotel in Tulum, which is just past the Xel-ha water park towards Cancún. It is a protected area where turtles spawn. A virgin cove of white sand full of palm trees and turquoise blue water. It was a little sunny, but the wind blew so much that it dragged the water and the sand at the same time, causing the glasses to fill with grit in a matter of seconds.

We left Tulum and time had not given us a truce. Maybe if we had more sun and less wind, we would not have stayed with that bittersweet feeling. I found Tulum expensive. It is too posh for my taste, although perhaps that says more about me than anything else. I feel more comfortable in a cabin lost in the middle of the jungle than in an eco-chic hotel on the beachfront. In Cancun, you will find more the gringo environment (boring).

As usual, those last days for breakfast I decided to give myself a small treat and ordered pancakes with banana, which seemed to fit well. After a while, a bus arrived and we got going. On the road between Tulum and Playa del Carmen, we only see the entrances to the hotel complexes that flood this entire area of ​the Caribbean.

As many people told us that the beaches of Playa del Carmen were nicer than those of Cancun and that the atmosphere was more relaxed, we went directly there. The first place we visited was El Gran Cenote, which is on the way. The water is super clear but super cold and super refreshing (the heat is like that of Panama in the middle of summer).

In little more than an hour we reached Playa del Carmen. The bus station is on the 5th Avenue, the nerve center of this city that 15 years ago did not exist. When we got off the bus, a breath of hot air stunned us. We were finally waiting for a sunny day in the Riviera Maya. We dragged our suitcases to our hotel. Certainly, seeing the situation on the map, we imagined that it would be closer, but it took us about 20 minutes to arrive.

Upon arriving there, the hotel surprised us very pleasantly. It was not in the most touristic part of Playa del Carmen, but it could be reached perfectly. The room was very nice, and the hotel had a pool and access to a private beach club that we did not even have. We put on the swimsuits and we took a bath before going to eat. And yes, it was reconfirmed. I'm a pool man because the truth is that it was very good there.

After freshening up, we asked the receptionist if he could indicate where there was a supermarket and a restaurant nearby. He asked us what kind of food we wanted. We told him "authentic" Mexican. he recommended a couple of places in front of a large hypermarket two blocks away.

One of the things that I love most about traveling is to enter a hypermarket and see what foods and other things they have. For example, in this case, I found a very curious offer. They gave us a Tabasco pot when we bought horchata. I also discovered that in Mexico cactus is eaten as a vegetable, also called nopales and that there is a great variety of spicy chips.

Right in front of the hypermarket is the taqueria-brasería El fogón, which is so "Mexican" that it transported us to our first days of travel. We ordered some Hawaiian tacos that had pork, sweet ham, cheese, pineapple and a sauce (I would say mayonnaise) and they were delicious. There we saw a group of Americans and mostly people from the area.

If I had to name something negative about the place, it was almost suicidal to eat in a brasserie with the heat it made. Then we return to the hotel to rest and refresh in the pool and savor the last hours of the trip. What a little desire to return on the plane we had booked! 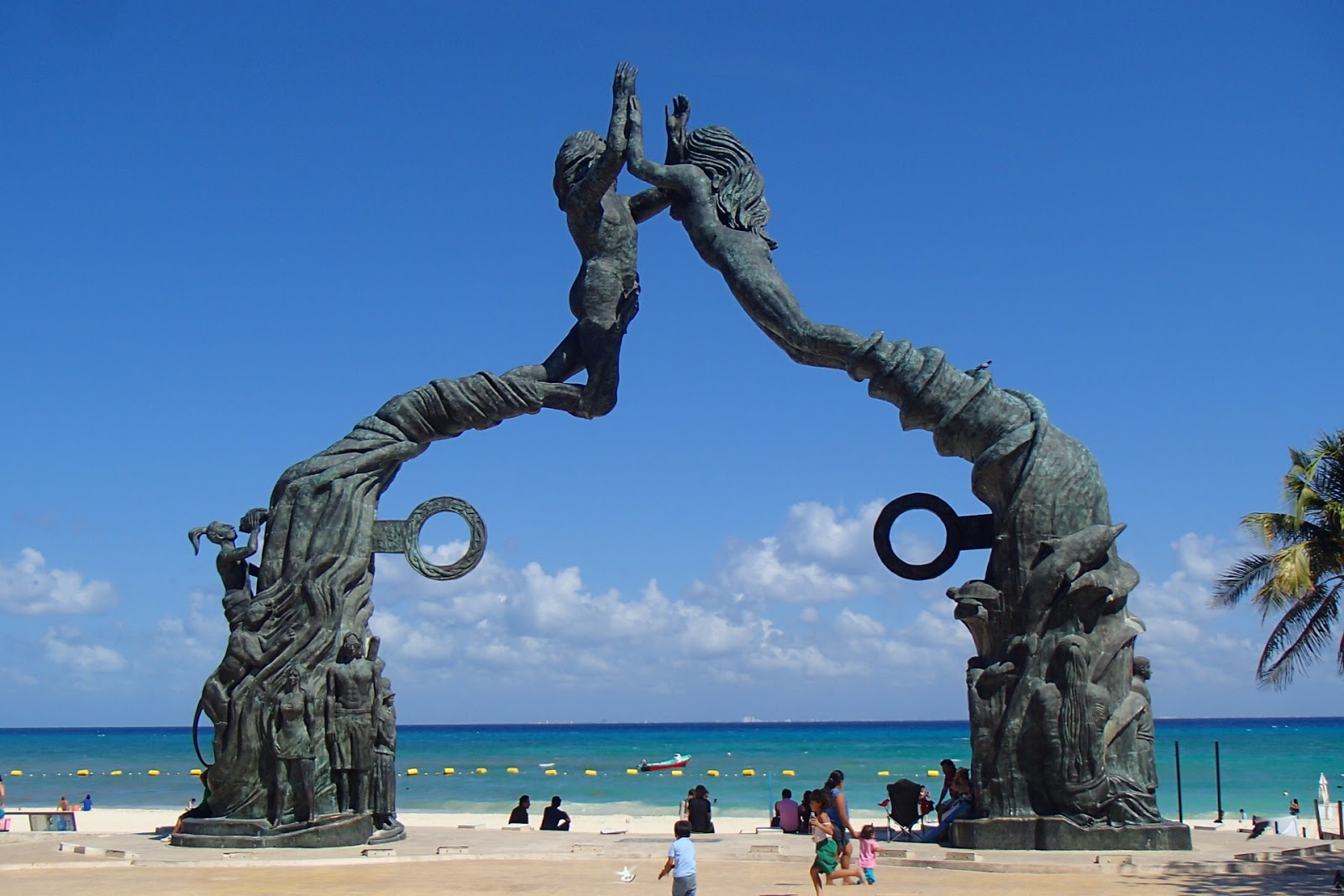 I remember that we were walking along Fifth Avenue, almost empty. Although by then Playa del Carmen was no longer a secret and its popularity had grown enormously, the streets were incredibly quiet. The large accumulations of people were reserved for the high season of the year. Some important developments were already on the famous avenue and announced progress, but nothing that stole his essence or at least that with which I knew that destiny. For me, it was in a perfect state.

Playa was the ideal destination for those who wanted to flee (like us) from Cancun, their party, and their spring breakers. It was a destination for another type of people, younger, more alternative, more European according to the words of one of its inhabitants. The Americans found it boring and the absence of "All Inclusive" resorts kept them away.

Another place we visited was Chichen Itza, which by the way is a little bit like 4 hours away. When we arrived at Chichen Itza we bought the package that includes the entrance plus the food and an entrance to the cenote of Ikkil which is one of the most famous in Mexico.

Around late-afternoon we came back went for a walk around Playa del Carmen. The city is very touristy and there are restaurants of all kinds, clubs with house music in full swing whatever the time of day. There are lots of souvenir shops with prices in dollars and tens or hundreds of Americans with British brunettes.

Even so, the city did not displease me. There are also restaurants for all kinds of pockets and night shows of all kinds, to which the Israeli girl recommended us to go and to which we never went. I think it was wise to spend our last night in Mexico there.