It is always a dream to travel to California. For my trip to Coachella, I have decided to make this post in which I will show you my trip in full. Coachella means boho style, crazy people, top musicians, pool parties and lots of fun. My first Coachella festival definitely blew me away.

It all started last year when I joked a bit about buying tickets for Coachella. Only a few weeks later I was sitting in front of my computer and an hour later I was proud owner of Coachella tickets and a campsite. For the longest time we did not worry, because it was still so far away. Now it is only 1 week and we are planning more and more details of our trip.

From New York we take the flight to my first stop at Miami. As our flight to LA was in the evening I took the opportunity to enjoy the beach, walk around the city and go shopping! Ocean Drive is one of the most popular and lively areas of Miami, an ideal place to dine and have a drink. But, above all, I had time to relax at the wonderful hotel in Miami. My favorite place to stay every time I travel there.

What I like most are the wide terraces of their rooms overlooking the beach, where I always enjoy a little bit of relaxation and good reading. In Miami I also love going to eat Mexican food. They have the best margaritas and ceviche. After the day enjoying Miami, I jumped into Los Angeles in the evening.

We built our journey around Coachella. So we rented a house and a car. Since we were all a bit jet-lagged, it made sense to spend a day in LA to get in the rhythm. We did our shopping. We packed the car and at 8 pm we started. We then went on a 5 hour drive crossing Indio to Coachella, which is about 2 hours in the direction of the desert.

Around 1:00 am we finally arrived in Coachella Valley. After a short walk around town we quickly realized that the tent was rather good, but we definitely are not well equipped. We then quickly set up the tent and then went to bed.

In the morning we quickly realized that the tent and the air mattresses are not enough. The sun was so strong from 7:00 that we woke up and almost died from heat. We went to the festival area around noon, but we did not have much luck with the cooling down. So we went back to the campground after a walk over the grounds. There, our tent neighbors gave us shelter in their shade until we all went back to the festival together.

The search for a parking place lasted at least 45 minutes on site. The way to the terrain is already an experience in itself. Masses of happy and festive people accompany us along the approximately 1 km long path. When I saw the legendary Ferris wheel soaring into the sky, my anticipation was at its peak and a big grin spread across my face. The most difficult decision at the festival is then: Which artists do I want to see? Because with 7 stages you inevitably always miss 6 concerts.

Regular festival goers stroll alongside colorful birds or A-class celebrities and fans celebrate. Everyone is welcome here and everyone feels comfortable.

At first we simply listened to artists and DJs randomly and had dinner. The acts began, which we really wanted to see. We started the musical evening. After a short walk, we briefly listened where we ended the evening then. The stage shows and light shows were really good and cool. The atmosphere was also really cool and the great thing was that there was so much time between the acts on the individual stages that the people left and we got a good seat 10 minutes before the start of the show and even during the shows there was hardly any scrum or jibe.

We are then back to the tent at 2 o'clock in the tent. 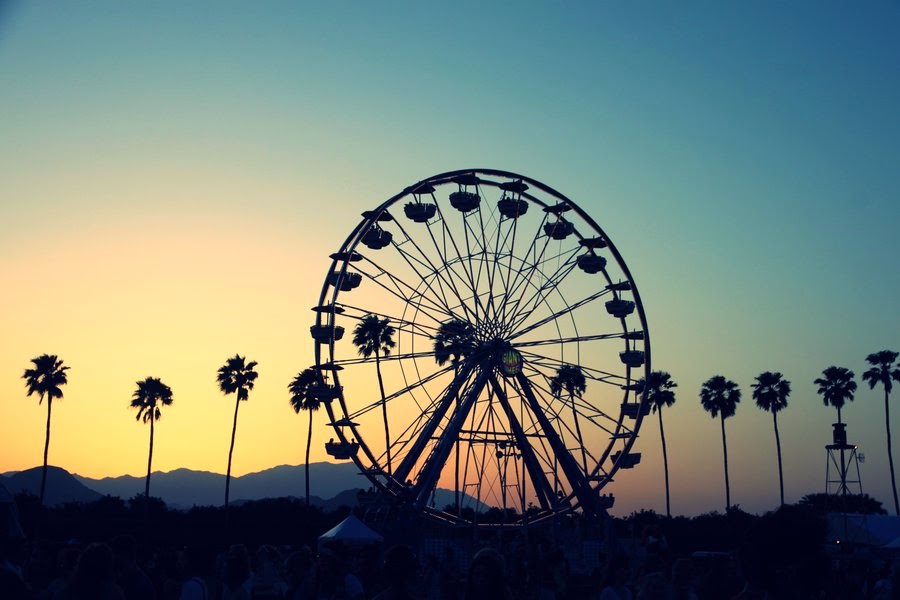 Again we were awakened by 7:00 am from the sun and were able to escape this only for the next 4 hours. I completely overslept this time and our neighbors thought I had a fierce hangover. After the extra nap and something to eat I felt better and so we made our way to the festival at noon to load our cell phones and external chargers.

The day started well as the Coachella Pool Party on noon was another highlight. The drinks were cold, the weather was hot and there was DJ music. In a private atmosphere there were interesting conversations, and promising contacts. There was even time to soak up the sun, before we made ourselves on the way to the festival site.

Colorful flower walls, food and beverage stalls, a R&B DJ and a pink roller skating rink provided an overwhelming private area with the right mood. Only those who own one of the coveted ribbons can celebrate the dangerous-looking security and celebrate in an exclusive circle. But then we take a fresh sip of ice cold coconut water at the pool for a hour or two to relax and unwind from the busy night.

By the way, the most followed trend in the Coachella Festival is bandana covering the nose and mouth. Everything has its explanation and, in this case, the dust of the desert forced everyone to follow fashion.

We sat there especially in the shade, because we took a towel to sit on it. Since our program started later, we have used the meantime to take some photos.

After a concert and another photo session, we first bought something for dinner and then it was already time for nother show. But after only a few songs in the middle of the crowd, I decided to sit behind the crowd. I sat back down and the others disappeared into the crowd after some time. We went back to the tent and at 2:00 in bed. Our neighbors had tried to persuade us to a party, but the bed was tempting.

The sun did not spare us today and we woke up at 7:00. Since all our cell phones were pretty dead, we spent the time sleeping in the rest of the shade. When the shadow was gone, we took turns to the showers and I tell you these showers were a dream. There were also hot water showers. One had asked me if they can use my mobile charger meanwhile, but since this was almost empty I denied. It did not prevent them from using it and making it completely empty.

When we got ready we went to the festival area one last time. After a good lunch we went first to the typical Coachella Ferris wheel, which was also air conditioned. After a walk and a photo session we went to the first concert. We started the day on the big stage. The evening will be followed by a visit to another. We had to get out. So I fell asleep around 23:00 but was woken up by our neighbors at 2:00 because they were trying to find out if we were already sleeping.

At 4:00 our alarm sounded, because we had to go to the airport in Phoenix. We left 30 minutes later than planned. We arrived in Phoenix at 9:00, spent the whole day cleaning up and planning.

After the Coachella all options were open and so we decided to go to Las Vegas and spend a few nights there.