After a long 12 hour flight, I made it back to Israel. I have decided to come back here to escape the cold and have a bit of Tel Aviv fun for the New Year. As I think I have mentioned, most holidays are very unique in Israel. Since Israel is a Jewish state, its laws around holidays are governed by the Jewish calendar.

People do not get XMAS Day or Easter off like in most parts of the world. Instead, they get off on Rosh Hashanah and Passover. I think its quite cool but it does still take some getting used to. The same goes for New Year. Even though Israel follows the regular calendar, New Year Eve really isn't a big deal here. This past year, the 31st fell on a Friday, so everyone is already off because of the weekend. I am thinking that in Tel Aviv there will definitely be some action.

So what is it like in Tel Aviv on Sylvester? As I said in an earlier post, most Israelis refer to New Years Eve as Sylvester, named after a Christian Saint whose special day is on the 31st of December.

So, I get off the plane and am ready to party. I tell a lie, as I am actually exhausted. I get back to the flat, say hello to everyone and grab a cat nap. When I rise, its dark and I start making my plans. It looks like its dinner and some drinks for us. We head to a friend for what turns out to be an incredible meal of wine, food, and fun.

After that, we cruise through Florentin and it looks like they are getting ready for a big street party (very popular in Israel). It is raining (perfect, I know) so we elect to head into town and find a bar to grab a drink. There are so many areas in Tel Aviv to choose from but my friend has to work at 11 pm (I know even on New Year) so we go close to her work on Dizengoff.

We grab a glass of wine and toast the New Year and what a year its been. I end up staying with my friend at her work, Hotel Cinema. It is actually quite a cool place with memorabilia all over the lobby from its heyday.

Now, it is a contemporary hotel but it is chosen to maintain a bit of its history through maintaining the movie feel. Hey, they even give guests fresh popcorn. Now that is service!

On a New Year note, not much is going on if I am honest in the hotel and outside in Dizengoff Square. It is very quiet and definitely it is no Times Square, Sydney Harbour or Big Ben. But I will take this relaxed pace this year. After dark, the countdown began to tick so slowly in spite of all the unmanageable circumstances.

Five! Four! Three! Two! One! My friend and I do the countdown together and give each other a big hug. Last year we celebrated together too while in the kibbutz. We had just met at the time and our friendship has grown so much since then. We only saw a single rocket fly over the roofs of Tel Aviv. Only a single miserable rocket! No guns, no smoke, no people on the street. But as the other guests had taken precautions and buy sparklers at the start, so at least a little New Year's Eve sprouted.

After the countdown we notice some sparks fly outside the hotel and realize someone is igniting fireworks on their own. Outside of being afraid I realize that we are DEFINITELY NOT (as a metaphor) in Times Square anymore. You know what? I kind of like it. 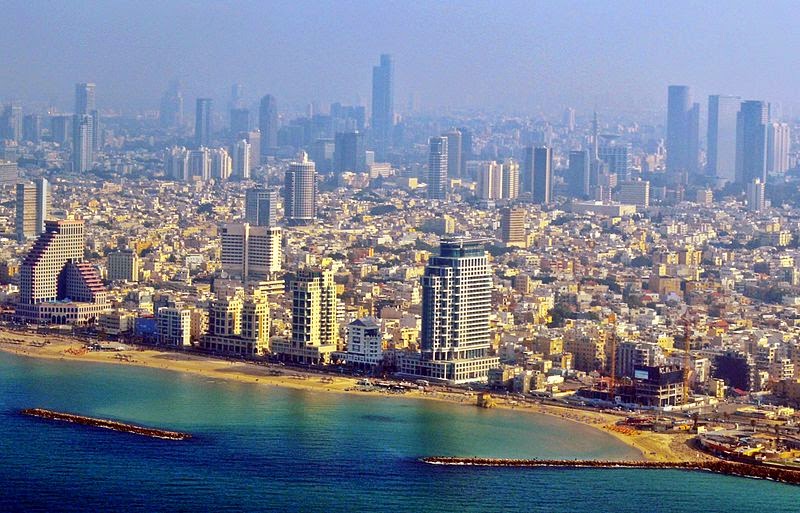 After a short night, I set off for a walk through Jaffa at dawn. The first day of the year began in much the same way as the last one of the previous year began. The sun was shining in the sky. Due to the continued spring-like weather, I got into the swarms even in the dirtiest street and with the most penetrating garbage smell.

It became clear to me that the skyscrapers along the beaches of Tel Aviv are pretty monsters, which in the dim sky spread fear and terror rather than holiday flair. The long arms of spring tore me into the open. With heavy legs and tired eyes I moved like a half-dead somehow to Frishman Beach. I spread out my towel and lay down.

The Mediterranean was rushing in front of me. Behind me, the construction workers pounded the beach ready for the summer. The sunbeams warmed my face and feet. I slowly dozed off and got me the first fat sunburn of the year.