I spent an interesting afternoon at one of the WWE matches in the USA, where I attended one of its various Pay-Per-View events. For those who do not know what I'm talking about, WWE stands for World Wrestling Entertainment. It is nothing but the old WWF (World Wrestling Federation) of Hulk Hogan and Ultimate Warrior.

If all this still does not seem familiar to you, I summarize the concept of wrestling as follows, using the definition of Wikipedia. Professional wrestling, or pro wrestling, is a non-competitive professional sport, where matches are prearranged by the staff. It is also considered an athletic performing art, containing strong elements of catch wrestling, mock combat, and theater.

In other words, the wrestlers take it for granted, but everything is "arranged". Despite everything, it is really fun and spectacular. Returning to my day, the WWE was in Seattle for No Way Out, one of several pay-per-view events. As a kid, I was a big fan of wrestling and after emigrating to the States I started to follow it on TV.

Wrestling, however, has a tendency to become boring, at least for me. After all for how long it is possible to watch people get beaten up before getting bored? Despite everything, I could not miss this chance to see this show live. I'm not here to tell you the details of who won the title of World Heavyweight Champion, who blew or who got injured. 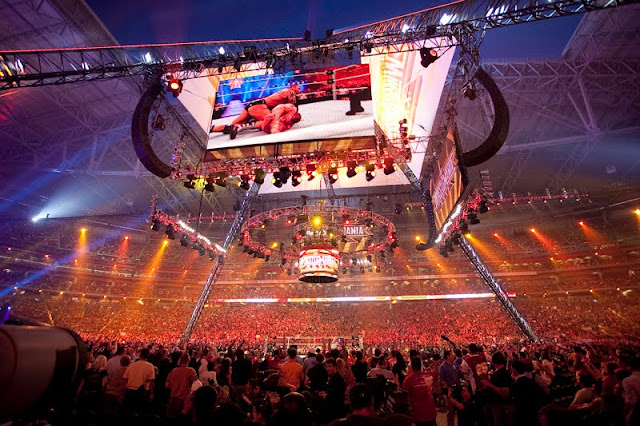 For me, the most interesting thing was watching the fans. And when I talk about fans, I talk about real fans. There are people walking around with a belt on their shoulders (as real wrestlers do), or painting their faces like a favorite wrestler, or who know all the plots and subplots of WWE. And so I saw freaky nerds, compared to which the nerds of the cartoon look like normal people.

And I saw girls 14 or 15 years old crying at the entrance of John Cena or Jeff Hardy to the ring. And I saw middle-aged men, with a few hairs and a lot of belly with their Triple H t-shirt (imagine a t-shirt normally worn by a bodybuilder as it may appear on the guy mentioned above). And I have seen children buy a teddy bear with the cuddly type face and the rest of the muscular body like that of a real wrestler. I also saw forty years of hair pulling when Undertaker (the gravedigger) lost the title against Triple H.

One of the questions I receive most often on my website is where can I find Real America? That question is almost impossible to answer because Real America is everywhere. The American society has thousands of facets. It's just a matter of understanding which of these aspects you are interested in learning more about.

Fans of wrestling represent one of these facets. They are, in their own way, unique and depict a very interesting reality of American society. Maybe they will not be the Real America of the collective imagination, but they are certainly spectacular, just like the champions they adore.