We decided to spend Christmas in the Sahara desert, in search of the warmth of the sunny morning of the Tafilalt. We knew that, in the night, the temperatures would be even lower but by the time the sun fell, we would be covered, warm and almost in bed. What we could not imagine is that we would find snow upon arrival.

When the guide arrived, we got into the car, and we left for the Sahara desert. After so many hours of travel to get to Zagora the day before, today was short and more enjoyable. We made a stop at a mud workshop where they explained the process of making the typical dishes they use in Marrakesh. Even I had the opportunity to make one.

After explaining how to dry them in an oven at high temperatures, the last thing was the return to the store. We followed the route and soon we realized that the landscape was beginning to change. We were entering the Sahara desert and signs announce at every step to ask to be respectful with the place, people and the water, that is so scarce in those places.

Once in a hundred years, nature works the miracle, and a thin layer of snow spreads in the white palm trees and dunes. The driver, is quite upset and I do not know why. I get up on my seat and I can see that there is no way to go. The road disappeared, being covered by a mantle of several centimeters of snow. There is a long line of cars and buses stopped in front and behind us.

After making a stop to buy bottles of water, in a few minutes we arrived at the place where the camels came from. And in this way, in an ephemeral way with the snow on the sand, we arrived during Christmas in the Sahara Desert, after crossing a snowy and beautiful landscape, as they had never before told us to imagine. Halfway down the road, between sleep, light dreams and little rest, I notice that the car has stopped. We only take the essentials to spend that night and the rest we kept in the minivan. We took the backpack, put the handkerchiefs and rode on the camels with no seats on top of the animal! There are a couple of blankets on the spine. The experience, apart from being painful was fantastic.

At our feet, the landscape was changing and the green of the palm trees began to run out and get increasingly brown until all we saw was sand and dunes. The trip was very entertaining, although I did not know how to get on with the jumping of the camel. We laughed a lot and more when someone got off the rope and strayed from the road.

It took an hour until we reached the camp. My mouth was getting drier and I was not carrying any bottle of water. I felt in my own flesh how bad it is to be thirsty in the desert. The first thing I did at the bottom was to drink a liter of water and then I, like children, went running to explore the camp and see our haima.

There were a few stores and we went straight to an almost mindless one. The interior of this one only had two mattresses on the floor and blankets. The excitement of knowing that we were going to sleep one night in the Sahara desert meant that we did not find anything wrong with it.

We left our backpacks and went out to run around the dunes as just behind our tent there was a huge one that jutted out over all the others. So we started to run and make an effort because of the incline that was. Taking out the feet that sank in the sand we reached the top. What a fantastic view up there!

Everything around us, from where we were to the horizon was desert. Euphoric and making gestures of victory I shouted to take a picture of me, another together, until it began to turn dark and we ran back. In the middle of the camp they spread a huge carpet where we gathered for tea and nuts while the guides lit a fire and prepared dinner for us.

I could see in the smiles of the people the enthusiasm for having arrived. So the gathering lasted until the couscous was ready and continued during the evening in the light of the moon and a small lamp that we lit. Just after the watermelon dessert finished the show, the guides came out with percussion instruments and gestured us to sit around the bonfire to enjoy the show.

They started with popular songs, whose lyrics only they understood. Then they even wanted us to get up and dance, and despite the embarrassment I was getting, I ended up moving my legs to the rhythms. That night ended in the best way with music, dancing and with mattresses in the open sleeping under the stars. 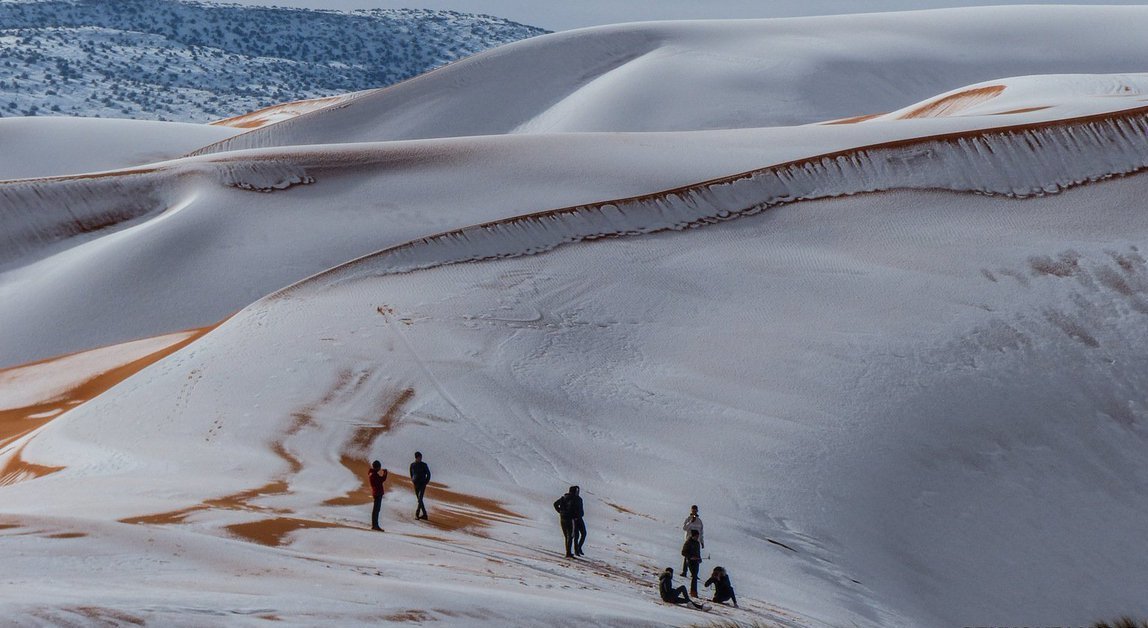 I felt the soft breeze on my back bristling the skin and I felt the need to cover myself with a sheet. I opened my eyes and saw the moon. Then I remembered that I was still sleeping under the starry blanket that covered the Sahara that night. As comfortable as I was and afraid to break that tranquility I did not dare to get up and get close to the haima.

So I took the handkerchief that was still rolled on my feet. I unfolded it and covered my whole body. I closed my eyes and then I stopped listening to any noise other than my breathing and kept on sleeping. I was the first to get up and the one in charge of awakening the rest of the group. I went around the entire camp and although we had all decided to sleep in the open, I approached each couple saying good morning.

Stretching at a snail's pace, some even resisted moving from the mattress and leaving the bed that had provided them with such a magical night. So they stayed in bed until I insisted that we go for breakfast. The walks to the makeshift bathroom followed each other. We crossed each other and with our eyes still half closed, we greeted each other.

Finally we all met in the haima dining room where breakfast was prepared. We ate in a hurry because we were already late and according to plan we would have to reach the arrival point of the camels before the sun came out as the road would become unbearable. We gave the breakfast remains to the Berber cats that inhabited the camp. We picked up our backpacks and went to the camels.

This time the road was more painful than pleasant. With the laces already well established in our legs, the jumps that the animal gave up and down the dunes were throbbing pain. I try to change position every few meters. In spite of everything, the tour became shorter. Before leaving in the minivan again, we said goodbye to the Berbers and gave them a tip in gratitude for the good night they had us pass and the exquisite food they had served us.

Now we had to travel the hundreds of kilometers we had made to return to Marrakech. So we settled ourselves in the best possible way in the van and left there. Now the atmosphere inside the minivan was different, tired. With some confidence already, each one was looking for the most comfortable position to make the road hours more bearable.

Finally we arrived at Ourzazate, but this time we ate at a different restaurant. We went upstairs where there was a terrace, believing that there might be a little wind there to alleviate the suffocation during the meal, but it was in vain. At that point the temperature was the same as in the lower part. So although there was one, I did not dare to eat cus-cus with such heat.

During the meal we talked about who wanted to visit the museum and as no one wanted at the end we were all together to visit the old town. The center of this one was little more than narrow and dark alleys in whose corners there was always some shopkeeper trying to sell something. The guide was explaining curiosities about the people and their way of life, leaving me thoughtful.

The owner of a riad, opened the doors of her hostel so that we could see the typical decoration in that area. The rooms has a lot of decoration and color but without being overloaded. The patio is full of plants and illuminated, with the cozy dining room and the huge terrace. It was the most beautiful riad in which I would not have cared to stay for a few days if it was well priced.

The brief visit to Ourzazate ended. That was the last stop with a proper name. The next ones were just to stretch the legs. So in a few hours we arrived in Marrakech. Our guide left us in the Djemaa el-Fna square. We said goodbye to him and he left.

We stayed in the riad in Marrakech. We kept their backpacks and took a good shower. Once we were all dressed up we met in the patio. While we decided where to have dinner that night we taste the hookah. The manager promised to buy tobacco and charcoal and promised us that when we got back we would have the hookah ready on the terrace.

When we had just taken the tea to which we were invited, we went out to find a place to dine for the last time. We finish again in one of the restaurants in the square where we had been, but this time on the terrace where the views were insurmountable and now with more company. With that panoramic background that enlivened the evening, we dined tajin for the last time. We remembered moments of the tour. We chatted long and hard.

The colophon was on the terrace of the riad where the owners had prepared the hookah with fruit snuff and left it at one of the tables that were near the sofas where we settled. And that was the outdoor scene where between weep and puff we said goodbye to Marrakech and Morocco.