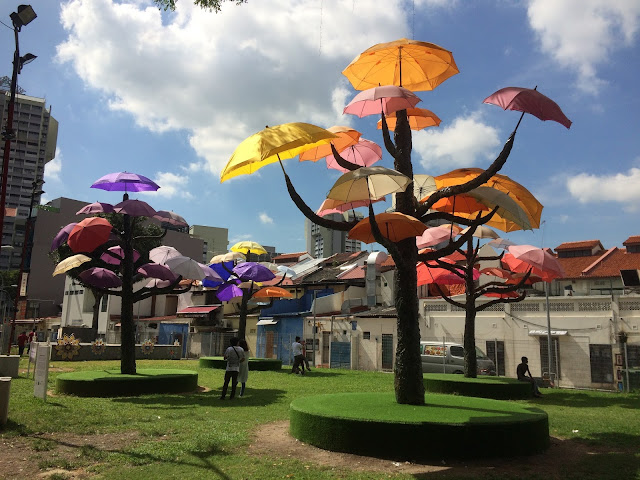 We got up to enjoy the last day of travel and vacations. We checked out, and left the bags in the hotel lockers. We had breakfast again in the familiar Starbucks and we just crossed the street to Arab Street, the neighborhood of our hotel. Arab Street, or Kampong Glam is the Muslim quarter of Singapore, the smallest of the three ethnic neighborhoods of the city.

Historically, this district of Singapore was assigned by Raffles to the Malay inhabitants of the Muslim religion. The heart of the neighborhood is just 4 streets flanked by the usual two-story houses of the nineteenth century. They are beautifully restored and painted in colors that is so typical of Singapore.

In that sense there would not be much Arab atmosphere if it were not because Arab Street itself has several dozen Arab restaurants and some carpet bazaars and other Islamic paraphernalia. Parallel to this street to the west is Haji Lane. This street, narrow and quasi pedestrian, is the most pleasant in the neighborhood. We see art galleries, designer clothing boutiques, modern cafes and alternative air.

Towards the east, the Muscat and Bussorah streets end in the north facing Sultan Mosque, that with its architecture confirms without a doubt that we are in an Arab quarter. It is a modern building from 1828 that replaced another 18th century mosque and is the most important mosque in Singapore. It offers us the typical Arab architecture of horseshoe arches, golden domes and minarets.

Although it has charm, we thought it was a bit like a Disney park. The mosque was closed and we could not see inside. The Bussorah street is flanked by palm trees that frame the view of the mosque. We ate traditional Arab dishes with ​​stewed meats, salads, kebab and roti!

We strolled a bit and when we saw that the neighborhood did not offer much more we headed north through a very anodyne area of ​​Singapore to Little India. We passed some blocks of buildings with very photogenic colors. The place is quite clean, tidy and westernized.

Little India is the third ethnic neighborhood of Singapore and probably the most beautiful and lively of the three. It is a residential neighborhood with several temples although there are also mosques and several shopping centers. Coming from the south first we passed by the Abdool Gafor Mosque that we did not visit.

Then we came across the Little India Arcade, an old shopping center that occupies a building of the early twentieth century but was closed. However, in the surrounding streets there was a food and flower market with a lot of local flavor. At the back of the market stands a colorful house called House of Tan Teng Niah.

It is an example of the last surviving Chinese villas in Little India, built in 1900 to be the home of the wife of a prominent Chinese merchant of the region. It is now a tourist attraction. The Little India Arcade goes north to Serangoon Road, the main artery of the neighborhood. It was adorned for some festival with ornaments of gaudy and quite tacky colors.

At the entrance to the street there was a quirky welcome arch to the neighborhood and beyond there was an elephant made with colorful flowers. Across the street was the Tekka Mall, a shopping center with hundreds of small shops selling Indian products. The site is wonderful. There we enjoyed for a while in an absolutely Indian atmosphere.

The two upper floors offers food stores with Indian products and especially Indian textiles and clothing. In addition there are tailors. It is a very local market with an irresistible atmosphere. We returned to Serangoon Street where a few meters further on stands the Sri Veeramakaliamman Temple, the oldest in the neighborhood, dedicated to the Goddess Kali.

It was closed and we could not see inside but on the outside is a tower decorated with hundreds of small figurines painted in colors much like the temple of Sri Mariamman of Chinatown that we had visited two days before. We took a walk through Serangoon enjoying the atmosphere and returned to the subway with the goal accomplished.

As we had plenty of time we decided to return to Marina Bay. We took the last pictures and we said goodbye to Singapore trying to capture the view of the most beautiful part of the city. We went back by subway and got off at Bugis. On the way to the hotel, we passed the Parkview building, a beautiful modern skyscraper but in an Art Deco style with a very New York look. It is next to the MasterCard tower with a facade with geometric motifs.

We retrieved the suitcases and went back to the subway to get to the airport. In just 20 minutes we arrived at the Changi airport. We arrived at Bangkok airport where we had to re-enter Thailand to check-in the flight back. We take advantage to eat, make the last purchases and at 2:25 in the morning we embark on a brand new A380.