Last spring I began to analyze the possibility of a trip of a week, more or less, to visit Wales, that quite unknown land of the West of Great Britain. I tried the possibilities of flights to Bristol or Cardiff, but the offer was less, and it did not suit me. At the end I got, at a very good price, a flight to Liverpool, which is close to North Wales.

I rented a car so I could move freely along the route. I had always wanted to visit Stonehenge someday. I did not come by the way, but it was not a great detour of the route either. So I started to dive on the Internet to see what the visits were like, the schedules, the prices. I was able to see the various options, and I saw that the possibility was offered, for small groups, to make a special visit, outside the usual opening hours.

Depending on the time of year, there were one or several visits at dawn, before the opening, and others at dusk, after the closing time. The light of a bright morning is great to get excellent photographs of the stones.

My trip was going to be in the second half of June. I articulated the entire route of my trip according to the date they gave me on June 21 at 6.30 in the morning. I booked a hotel in Salisbury, which is the nearest city to Stonehenge (about 16 km away). Next to Stonehenge there is a town called Amesbury, but with fairly limited resources. I chose the hotel in the center of Salisbury, almost opposite the entrance to the Cathedral grounds.

I arrived in Salisbury the day before, on June 20, in the afternoon. We arrived super punctual at the small airport. We ate right there in one of the few bars there were, some very good sandwiches and we went to the office to pick up our car. The truth is that the first contact with the language was very pathetic.

We did not catch anything, but the girl at the counter was very nice and very helpful. I wandered a bit through the center, I had dinner, and I went to bed early, as the next day we had to get up early. 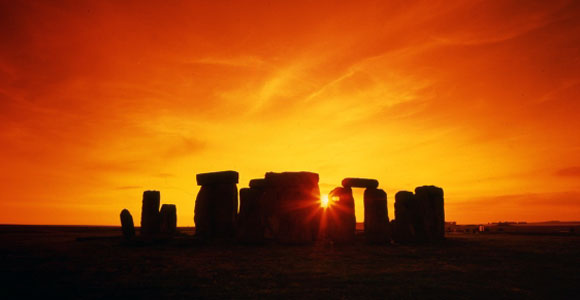 I got up before 5 in the morning. I prepared coffee in the room. I took some warm clothes, that despite being June, the early mornings were cool, and the camera. I got into the car and went to Stonehenge. I arrived at the parking lot at 6.15 in the morning, with the sun beginning to appear over the horizon.

There were very few cars in the Stonehenge parking lot. Only those of the previous visit (yes, that day there was another visit at 5.30 in the morning) and the little pirates that we had booked for 6:30. At that time the previous group left the premises, and we entered. We were with a small group that had arrived there that morning from London.

Built in several phases from 3,000 BC, Stonehenge is the most famous prehistoric monument in Europe. It is only possible to speculate about the rituals performed here, but the alignment of the stones leaves little doubt about the relationship of the circle with the sun and the changes of seasons, as well as the knowledge of arithmetic and astronomy of its builders.

Despite popular belief, the circle is not the work of the Druids, a priestly cult of the iron age that flourished in Britain around 250 BC, more than a thousand years after Stonehenge was abandoned. Stonehenge is classified as a World Heritage Site by UNESCO but there is still much underground waiting to surface.

Logically, for the summer solstice the atmosphere is even more special. The experience was wonderful so much so, that it has been hard for me to reduce the collection of photographs. Because they all transmit something very special. The only drawback to the special visit that includes the Interior of the Circle is that the store is closed at that time. I could not buy any of the many souvenirs offered during opening hours. But I did take a very special experience, which I share with all of you today.

After an hour of wandering inside and outside the Circle, the visit was finished (there was another small group prepared for 7.30 am). I went back to the hotel in Salisbury, had breakfast, and then visited the Cathedral. Like the rest of Wales, it's worth it. When we arrive we park in the first parking lot that we see. The Cathedral was built between 1220 and 1258 in English Gothic style and is the highest in all of Britain with 123 meters in height.

The truth is that it is beautiful and also has several things that make it special with its watch, the restaurant, and the Magna Carta. The interior is spectacular. There are many tombs and flags, but what most strikes us is the machinery of the cathedral clock. It is the oldest medieval clock in Europe still in operation. The baptismal font is also very interesting and modern.

Designed by William Pye in the year 2008 it offers a great contrast with the medieval style of the cathedral. It is so big that it allows to celebrate baptisms by total immersion. Once we have seen the interior we go to the Chapter House and see the best preserved original copy of the Magna Carta, but it is closed. So we have to settle for the beautiful cloister.

Once seen our main objective we went out again to walk through Salisbury. Around the cathedral there is an area with some houses with garden that make us want to stay and live there. It is a not very big and beautiful city, with pedestrian streets full of small shops. After a little walk around the town we eat on the lawn of Queen Elisabeth gardens, next to a stream.

Here the parks are something from another planet. They are all fairy tales, with lawns that look like well cut carpets, and so much variety of plants and flowers but all parks are like that. I do not know how much money the English spend on gardening, because it's not just that the weather helps them, it's that everything is perfect.

The city lies at the confluence of five rivers. The Nadder, the Ebble, the Wylye and the Bourne are tributaries of the fifth river Avon that flows into the English Channel to Christchurch, Dorset. It starts to rain. The truth is that we were lucky because the forecast was that it would rain all day and it has not been like that.

We take a well-deserved rest and we go to have tea, at an un-British time. When we finish we have to make a little time because the universal flood is falling. The next stop is Averbury, where there is another essential megalithic enclave of The Henge. With 335 meters radius, it is the largest of all the prehistoric monuments found in the UK.

Unfortunately, half of the stones were torn up in centuries past to be used by the locals to build their houses. It begins in an avenue a couple of kilometers and ends in it circle. So we take the backpack and give a little spin to everything. When we are finishing, it starts to spark a little, and we accelerate the march to finish and leave.

Near there are several giant horses drawn on the mountain, like tribute to the prehistoric structures of the area. This is the one of Alton Barnes, and it is from 1812. By the way, I was curious to see what the roofs of the rural houses like this were made of. The next stop is Oxford, so we take the car and get going. The road is pretty good, and it's largely a highway, so at late noon we're in Oxford.

The center is pedestrian, and we started to drive around, but we could not find a place, since the two parking lots are full. We ended up parking near the bus station, but you can only park two hours.

So we take a quick stop on the main street, and we go straight to the Christ Church, with the idea of ​​seeing everything we can. With the rush, we passed that in front was the Alice's Shop, the store dedicated to Alice in Wonderland and Lewis Carroll.

We go on a tour of the High Street, St.Mary, from here to the Radcliffe and the Sheldonian, and finally see the imitation of the Venetian bridge of sighs. At this moment, as it was already 6 in the afternoon, and we saw that almost everything was closing.

We decided to take a walk around the gardens of Christ Church. Here the feet already said enough (we had been walking since 5 in the morning. At the end we go to the car. We wait 10 minutes for the rain to calm down and we go to the B&B, which is very close to Marlborough.

The GPS confuses us a little and leaves us in a place where there is nothing, but in a moment we are located and we find it. It is a family hotel, and the owners are very friendly. We go to the room to leave the suitcase and decided to go down to the pub to have something, since it is Saturday.

We ordered huge ciders and we became the center of interest of the place. We still seemed as exotic to them as they were to us.