The best thing should be saved for the end. It was not until the last day of our travel around New York that we planned a detour to the Statue of Liberty. It also rains in NYC when we arrived. So we decided to return to dinner in the pub below the hotel, a bit discouraged, because they told us that the next day was also expected to rain and our main plan was to visit the Statue of Liberty.

We had to be at 8 o'clock in the morning at the ticket office to collect the tickets that we had previously bought online. The tickets for the ferry finishes quickly. Tickets include ferry transportation to Liberty Island and Ellis Island, as well as the climb to the statue. So, very early we took the subway to Bowling Green and sometime before 7:30 we were there.

Just 30 minutes before the opening of the gates we are already in the Battery Park. In Battery Park, next to the port where the boats leave for the statue, the Sphere that was in the World Trade Center was placed just as it was after the attack. There is also a sign that tells us that anywhere is paradise. Before boarding the boat there is a strict security check and then another on the island before accessing the statue.

The boat trip lasts about twenty minutes and is one of the best ways to see the New York skyline. There are also very good views of the statue itself and Ellis Island. Without a great wait, the boat bring us over to the island where the symbol of America stands tall. Once there we can see the Statue of Liberty close up.

The blue sky compensate for the bad weather of the last few days! However, reasonable photos are only possible later as the sun is very bad in the early morning and we have to fight with the backlight. The crossing takes almost 15 minutes. Everything is somehow impressive. Whether it is now the countless ships that seem to be traveling here or the skyline left and right. 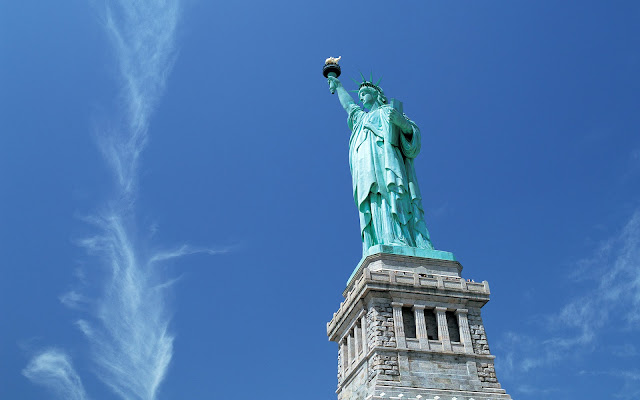 The path leads us first to the security check, which everyone must go through. And honestly, a visit here is not a visit if you just look from the outside! We first get to a kind of museum, where the story of the statue is told and there are all kinds of miniature models.

We finally reach up on a pedestal below the statue via a staircase. An elevator exists, but this is only for wheelchair users. At first, we do not really see much. As a consolation, however, we have a good view of the surrounding area from here. We can see Ellis Island, the southern tip of Manhattan, New Jersey and also Brooklyn Heights is still recognizable.

At the bottom, we walk the circular path around the Statue of Liberty again and snap a thousand pictures. We have a final stop in the souvenir shop here, of course, that cannot be missed. On the way back we visit Ellis Island. The place historically has a quite important meaning. Every immigrant had to come here before he could enter the USA at the time. Today, the ancient building has been transformed into a museum and the history of early immigration is told through video documentation and exhibits.

The most expensive variant to see the Statue of Liberty is probably a helicopter flight over Manhattan. There are various agencies whose price is not really much different from each other. The flight time is usually 8 to 12 minutes.

Back on land, we take a closer look at the Battery Park. Here we again see among other things a bronze ball which formerly stood in one of the towers of the WTC. It remained undamaged by the collapse and today reminds the events of that time. In addition to the WTC monument, there is the World War II East Coast Memorial. The eagle statue looks exactly at the Statue of Liberty and is surrounded by numerous marble columns where the names of the soldiers who fell in the second world war in the West Atlantic is found.

Next, we walk up to the Pier 17. But what exactly is Pier 17? In principle, it is nothing more than a shopping and food mile with many nice and good restaurants to dine or just sit down for a drink somewhere. There is also the possibility to take a ship from here to the Statue of Liberty. 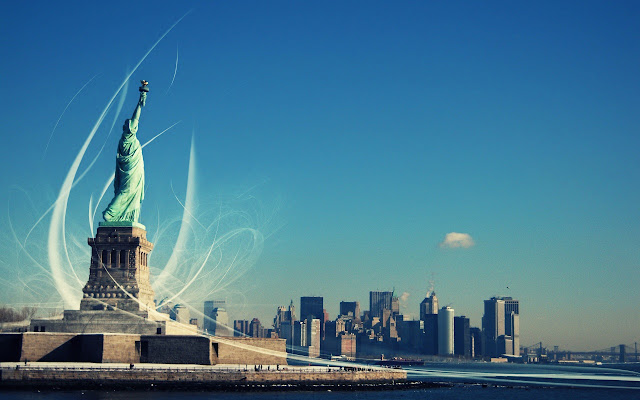 The view from here of the Brooklyn Bridge is by the way, one of the best as I find, at least from the Manhattan side. Since it is still too early to wait for the sunset, we decide to go back to the hotel and have something to eat. After all, we have enough time to prepare for the show tonight and to be on time.

In time, we get on our way to Brooklyn. We take the metro to High Street again and walk down to the Brooklyn Park. And as it seems, the weather remains dry. Although there are a few clouds, apparently no drop of rain dares to come near us! We experience the Blue Hour and it could not be more beautiful. The Statue of Liberty and the skyline show up its best. It almost seems as if they were apologizing for the bad weather of the last few days.

We reach the former Empire-Fulton Ferry State Park, which has now become part of the Brooklyn Bridge Park. Here, next to Hudson, there are a few stairs where every-night visitors accidentally come here to experience the sunset and the Brooklyn Bridge at night.

The view of the skyline and the evening light is simply breathtaking. The skyline of Hong Kong at that time was certainly impressive, but this one has a completely different fascination, which is difficult to put into words. That was the last night in New York, a city you should see at least once in your life.

After this we ate in a Thai restaurant where people who worked in the area ate and from here we get back to the hotel to rest a while and prepare the suitcase, since at night we will see the musical The Lion King, and tomorrow we leave New York.