After our arrival on the island of the Gods from Borneo and our first hours in Ubud, it was time to get up early to tour Bali with a driver. Today we were going to visit many temples and places of interest in Bali. We started the route in a different way and we went to the rice fields of Tegalalang. The island of Bali is famous for its rice terraces and the rice fields of Tegalalang are one of the most famous for its proximity to Ubud. We went to another area since in the main part they had already picked the rice and it was not very green.

Also, a traveler on Instagram already wrote me and told me that they had just been in Bali and the rice paddies were not very green. After a walk and seeing the immensity of the beautiful rice fields, we continue with our tour of Bali with the driver.

The next point was the famous Tirta Empul temple. The first temple we visited in Bali and where I ended up falling in love with the island. Tirta Empul is a water temple, near the city of Tampaksiring. The temple complex is famous for its holy spring water, where Balinese perform the ritual of purification. As soon as we arrive, we can already see the magical and spiritual atmosphere that characterizes the island of the Gods.

Our next point in the Bali tour with the driver was the Kehen temple. The Kehen temple is in the north of Bangli and is often described as a miniature version of the Mother Temple or Besakih Temple. It has 8 terraces, is built on the side of a hill and is surrounded by palm plantations in a very mystical atmosphere. To access we have to climb its steep stairs and cross the beautiful entrance. Upon entering we can see a huge banyan tree, which creates a cool climate and is considered a sacred tree by the Balinese.

We ate at a restaurant but the food was nothing special. It is not that we eat badly, but we eat better in local warungs and are much better in price. Of course, the views of Mount Agung are truly spectacular. After lunch, we continue our tour of Bali with the driver. Now it was the turn of one of the most famous and important temples of Bali, the Mother Temple or Besakih Temple.

Pura Besakih is the largest and most sacred temple in Bali. It is located on the slope of the sacred Mount Agung and composed of 22 different temples. During the earthquakes of 1917, many of the temples of the Mother Temple were destroyed and had to undergo a great reconstruction.

In addition, with the eruption of the volcano in 1963, the complex was left unharmed, a fact that made the Balinese citizens classify it as miraculous. We walk and observe every corner and go up its stairs and temples where we could see some beautiful views.

We continue on a secondary road to climb towards Pura Besakih which is located at almost one thousand meters above sea level at the foot of the volcano. It is rich in Meru, that is, multi-story pagodas (up to 11 roofs made of black palm fiber). It is a spectacle, with a forest of thick, high pagodas, and a multitude of pilgrims carrying offerings. 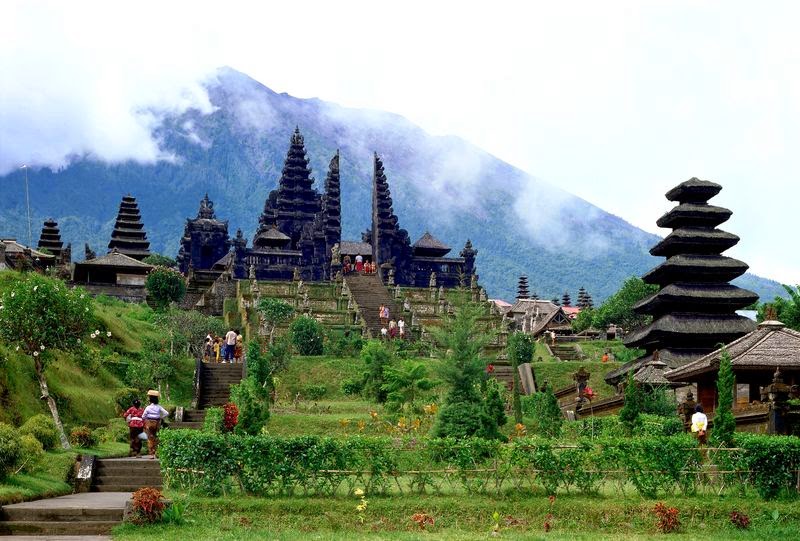 There is an incessant arrival of people who reach Pura Besakih with the most different means, by car, by motorbike, on foot, by taxi, by bus. The main temple is dedicated to Brahma, Vishnu, and Shiva. The largest and most solemn festival held at the Mother Temple is called Eka Dasa Rudra and is held only once per century. Now the show here is threefold, with the temple complex, the great volcano just behind it, and the people who bring offerings.

And it was time to say goodbye to the Mother Temple to continue the tour of Bali with the driver to Tirta Gangga. Tirta Gangga literally means water from the Ganges and is a place of great importance for the Balinese. This temple is a palace of water and a labyrinth of pools and fountains surrounded by a lush garden full of statues carved in stone. The centerpiece of the palace is an eleven-level fountain where we can walk through its tiles in the water.

At this point, we were next to the Lempuyang temple, but it was dangerous because of the monkeys. I was very sad and when we got home I looked at Instagram and asked a girl who had been. Back in Ubud, we wanted to go through Virgin Beach, which we had also targeted, but it was already getting dark and we could only stop in the Candidasa area to watch the sunset.

So we would leave Virgin Beach and Chocolate Factory for the day we went to the Lempuyang Temple. The return to Ubud was really long and we arrived tired, but we were very happy because the day had been really exciting.

We arrived at the hotel and decided to go to dinner first because we were very hungry. I had a craving for pizza, so looking on TripAdvisor we found the Italian restaurant and it was when we discovered our favorite street in Ubud, Jalan Goutama. In a small street with a lot of liveliness and full of restaurants, we go several times during our stay in Ubud. We ate two wood-fired pizzas with Bintangs. After a shower we sleep.