By coincidence of destiny, my trip to Iran has coincided with the biggest annual party of the country, the Nowruz, the Parsi New Year. At first I was alarmed because it is the high season of local tourism. Half the country is on the road and the hotels are packed. But now that I've lived it, I'm glad of the experience.

What is Nowruz? It is the new year, which in Iran coincides with the spring equinox. It is also celebrated in other territories that were influenced by Persian culture, such as Afghanistan, Albania, Azerbaijan, Macedonia, Georgia, India, Iran, Kazakhstan, Kyrgyzstan, Iraqi Kurdistan, Tajikistan, Turkey and Turkmenistan.

Nowruz, Elburz, Behistun or Firuzabad are words that could make us think deceptively in the trilogy of The Lord of the Rings. Nothing is further from reality.

Nowruz is the most important celebration of the year in Iran. It has its roots in the Zoroastrian religion and symbolizes the end of the dark winter as the spring is welcomed. It is not a celebration of just one day. It lasts 13 days from the entry into the new year and is the largest and most important Iranian holiday period.

In Iran, the Nowruz ceremonies begin with a deep cleaning of the houses. It is celebrated by traveling to see relatives and with endless meals with the whole family, which lasts until dawn.

Our trip to Iran was in the time of Nowruz was an accumulation of circumstances. Our first intention was to take the trip during the month of May. But we decided to advance the trip by two months. Between work holidays, and the price of airline tickets (we already know that from one week to another can vary a lot), we stand in the middle of Nowruz.

Traveling in Nowruz raised a series of doubts. Would it be very difficult to find accommodation without prior reservation? And find transportation? Would the bazaars and tourist spots be closed on the most marked days? How could this affect our trip?

The new year is super high season in Iran. It is a time when Iranians travel a lot as families come together to celebrate the holidays. One of the first things we decided was to try to find a host to be able to experience the party from the inside. It could be a very enriching experience to live the celebration as a family. And if we did not find a host, we would look for our lives and sleep in a hotel. But we were going to try it.

The second decision was to try to book an internal flight from Tehran to Shiraz from home. We had read that due to the economic sanctions that have been imposed it is difficult to buy something from outside the country. But we searched and searched and finally found a website that allowed us to make the purchase of the internal flight. I have to admit that I did not have them all with me when I bought it, but it was all perfect.

With the reservation of the internal flight and a hotel reservation in Tehran (since we would arrive at dawn) we arrived in Iran.

We arrived days before Nowruz. Our first host in Shiraz fell at the last minute and we had no problem finding accommodation at the hotel. And the same hotel booked us the bus tickets to Isfahan a day in advance.

We arrived in Isfahan almost at night after seven hours in bus without hotel reservation, as always. We had no accommodation, and needed hotel. It did not take us long to find accommodation. We went through three average hotels, near the center, and all with availability. In the end we were left with the third one that was the one that we liked the most.

We thought it would be very difficult to find accommodation two days from Nowruz and in Isfahan, a city that has more tourist attractions of national and international interest. But the reality is that it was not like that. With our backpacks we got on a taxi heading to our host's house. What nerves! It was our first time. We have mixed emotion and uncertainty for not knowing what we were going to find.

A young 23-year-old medical student welcomed us at the door of his house. Upon entering his house, he made us feel at home. His mother arrived. She offered us fruit, sweets and tea, and we chatted for a while. We enjoy a delicious homemade meal together. The only one in the house who spoke English was him. The house only had two rooms. In one the mother and the daughter slept.

The host show us the room. After lunch, we went to visit the city. We saw a lot of life in the streets. The streets were crowded, and the bazaars were full, full of people doing the last shopping before the holidays. At nightfall the host appeared with a boy from Germany. They came to where we were. He was showing us places in the city and we had a good time. We went to buy some pizzas for dinner and took them home.

Upon awakening, the hosts prepared breakfast for everyone. They were accustomed to welcoming young travelers. The day was the great day, the day of the Persian New Year, the Nowruz. That day we celebrated as a family. Everyone ate where he could, some on the floor, some on the sofa. They gave us gifts. We drank tea, we ate fruits and sweets without stopping. We spent all day eating! And they made us feel part of the family.

We went to visit the Armenian neighborhood. We walk a lot, visit some mosques that we had pending, and enjoy a city that fell in love with us from the minute one. Observing the passion exhibited by the Iranians for the selfies and the smartphones nobody would say that they live in the year 1395. And it is not that the madness for technology and photographic hedonism reached the Persian deserts in the Middle Ages.

They proposed us to go somewhere to smoke shisha. We returned at 1 in the morning and between dinner and everything went to bed very late. But it was worth it. 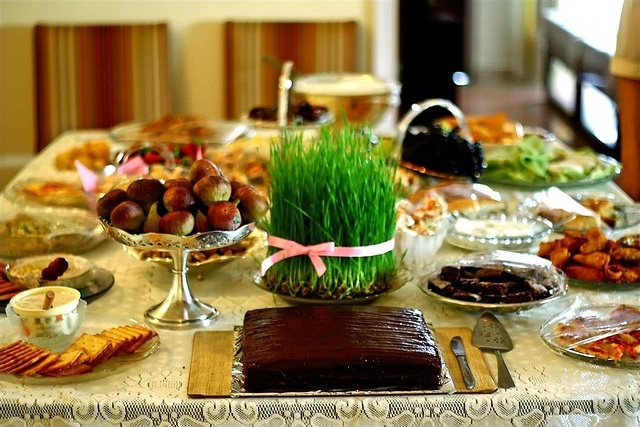 When we decided to go from Isfahan to Kashan, our host booked us a bus ticket online just one day before without any complications. They treated us as if we were family, and that was one of the best experiences we have had traveling.

We arrived in Kashan. We contacted our host via WhatsApp already from the bus, informing of the time of our arrival. Once there we went by taxi to the address you gave us. We arrive at the meeting point. We enter the house and they offers us tea and fruits. After a while, they offer us to eat, and we accept. We all eat together.

That afternoon we went for a walk around the Kashan bazaar. In one street we stumble upon the Ḥaji Firuz, a character dressed in red, smudged face and tambourine in hand that jumping and making capers announces knocking the doors the arrival of the Nowruz. The party atmosphere is perceived in every corner. The squares, gardens and roadsides are filled with families picnicking on rugs spread in the most unlikely places.

The night before we had gone to bed late, and that day had been exhausting between the bus hours and touring the bazaar in the afternoon. We thought it was a great idea not to be invited to dinner.

We showered, and when we were already in our pajamas, and it was 10:30 at night, the host, suddenly appeared, telling us to get dressed so we had to go for dinner. The world fell on me. I was so tired, already with my pajamas on, with my hair still wet. Seeing our host there insisting that we have to get dressed, in 5 minutes we left. We ate dinner, and went to bed.

When we woke up, we all had breakfast together and we went to visit the small town of Abyaneh. At 5 in the afternoon we are already in town. It is a very small town, very rural, with goats, dogs and other animals out there. And we do not know very well what to do.

At the entrance of the houses, the Iranians put the Haft-Sin or table of the seven S. They are bowls with seven products full of symbolism whose name begins with the letter seen of the Persian alphabet. Among them, shoots of wheat, symbol of the rebirth that spring brings, garlic, which embody medicine, apples, in reference to beauty and health, or vinegar, which personifies old age and patience.

It is also the time to open wide the windows and doors of the home, to air it and to do an annual thorough cleaning. They offered us sweets, tea (a thousand times) and fruit. And so we spent the afternoon.

The Iranians do not stop offering us food, and we go eating. There was a time when so much hospitality overwhelmed me. We had dinner, but before returning home. In every house we enter they offer us food! That day we had a really good time. We danced and had a great time.

This was our last day in Iran, because after that meal, and at night, we went to the airport. We are very happy to have lived these two experiences, both in Isfahan and in Kashan.

We believe that our experience has been so intense to travel during the Nowruz, a time when the Iranians get together a lot as a family. Our days in Kashan flew by from one family to another. We could not visit anything from Kashan except the Bazaar (and the village of Abyaneh). They also gave us no option.

The ruins of Persepolis or the famous square of the Imam of Isfahan was like a beach. We were able to see the walls of the Byzantine era (based on earlier ones that are more than 3,000 years old and the longest in the world after China), the Great Mosque, which is one of the oldest in the country, and we also see the old churches that remain.