I decided to venture to Rishikesh. I had everything ready with a brand new rented 410 cc Royal Enfield Himalayan and the travel insurance but things got messed up. For better or for worse, this trip that was intended to be a journey full of adventure, overcoming and friendship. It would end up being a work trip, with its high doses of all the above.

It began in the chaotic city of New Delhi, the capital of this subcontinent. The first to arrive we went to collect the first mounts and at the end of the hot and suffocating day that the city gave us, we were all in the hostel wishing to go out for a beer and start the trip.

The tour began in Delhi. Leaving the gigantic city would not cost much, as we were lucky that just that day was a holiday and traffic had decreased a lot. On my journey I see there were other motorcycles rented in other locations, but the tours were shorter, simpler. This was a really incredible ride. We crossed two days of many kilometers and heat until we reached Risikesh, where a surprise awaited us. Slowly our first destination, at the foot of the mountain, was approaching.

This small town at the foot of the mountain, 200 km from the source of the sacred river Ganges, is a place of peace in the mountains. A place of pilgrimage of the yogis, the same place where the Beatles years ago went into a trance, where courses are taught in the ashram and people come from all over the world to rest their minds. A city, I remembered from other times, quiet and very picturesque, full of characters taken from other worlds wandering the street. But everything changes and this town in northern India was not going to be less.

Rishikesh turned out to be a place full of people who crossed the two bridges like ants eager to make their way back home. In reality, the peace of this place was broken by a holiday that attracted thousands of people to celebrate both here and in nearby Haridwar. We found a decent hotel where we would spend the night to rest and start doing something that we really wanted. Yes, to see the temples, life and the environment of this town.

We advanced 100 kms from Rishikesh, and at 4 PM I realized that I did not have idea what it would be like to ride a motorcycle through this country. On the one hand, are the landscapes. They are huge, immense, and the mountains are flooding one, something I had never seen before. On the other hand, the way of driving is something that I had not seen before either.

The main road is bordering a mountain but the abyss is huge and the edge of stone that stands on the other side too. Suddenly the lane disappears and the buses stop 100 meters behind knowing that the truck is coming to let it pass through the parts where only one car can fit. We went along the Ganges River, going up from Rishikesh to Srinagar.

We stayed in Srinagar in a guest house, ate well and slept with the enthusiasm of the trip we had started together.

We got close to a motorcycle with two passengers. Like the thousand motorcycles we saw, these were Sikhs traveling from Punjab to Hemkund Sahib on a pilgrimage. They are thousands of pilgrims. Some ride motorcycles, others drive, and others walk barefoot! We passed them of all types and find mostly men and very few women.

In this route, we find more than anything other than the sikhs with turbans mounted on their bikes. We started going along with a couple with the co-pilot load a huge backpack with clothes between the two people and we passed several times. There I greeted them and they greeted us. We took pictures of them, and we began to walk together.

We proposed a stop and they stopped. I was already admiring them a lot for making this trip with so much faith and devotion to their god. I asked why do they think it is so important to make this trip every year? They say for them it is a good opportunity to escape from the house. Sometimes they get tired of their parents and so they do this.

There we were realizing how this new generation of Sikhs were westernizing slowly too. They wore converse shoes, tight pants, just like the youth in Brooklyn. We continued together and we ended up meeting again an hour later. Suddenly the bike lost all power, all energy, and the accelerator stopped. In few seconds it melted completely.

There were more Sikh bikers and nobody knew how to fix it. It seemed that it did not spark, but it was not the spark plug. Someone said the coil burned. Anyway they pushed for one kilometer, and see nothing. Then one of them shot up to the next town, brought a mechanic and with the mechanic and another motorcycle we were pulled to the next town of Gauchar.

They inform us that this is indeed Coil problem and that the part can only be obtained in Rishikesh. They will ask for it and arrive at night. We stayed in Gauchar. What seemed a delay in our itinerary became a pleasant experience. We went down to the river, half a kilometer from the town.

Crossing it by a suspension bridge we found a hidden little town, where chants from a temple came out. We looked curious and suddenly we were in the middle of a ceremony. Some men welcomed us, took out seats, and slowly others came to say hello. They explained to us that in these days of the year all those who have ever lived in this little town meet and make a ceremony to a goddess.

They brought us food from the ceremony with banana covered in powdered sugar and masala chai. I was very impressed by the hospitality of these people in the midst of so much humility. The houses were built with mud. Each house had a cow or a calf or a goat in front. And anyway they found a divine way, very special to receive the visit.

They brought us the food on a large leaf of a tree similar to a banana leaf. When it got dark we said goodbye promising that when we returned from Mana (last town on the border with Tibet) maybe we would return. Yes, they did not let us leave without photos.

We left the next day to Mana. In Mana and the small towns before Mana the view is getting more and more spectacular. During a surprising path through the beautiful landscapes the differences between the ethnic groups that populate the beginning of one of the largest mountain ranges in the world of the Himalayas get apparent.

It is pure Himalayas snowed on the tops! The Himalayas do not care about summer. It does not tickle them. When we got on the bike we put on a jacket, glove, double pants as the cold is getting strong! Mana in many ways similar to the previous town. They are hilly people, very self-sufficient. In the case of Mana, the field is less worked and more dedicated to the tissues. Cars are not allowed.

Reaching this green and leafy valley was a real respite. The valley was a haven of peace, silence and pure air. Quite the opposite of what I had lived during the long days of travel here. Seated at last in a comfortable bed, impeccable white in his quilt, with perfectly painted walls overlooking a mountain of more than 4,000 meters, between deep ravines and brushstrokes of ice and snow, I breathed.

Gone was the worst day so far, a day in which I went from the total enjoyment of the mountain road and my saddle, to the desire to throw in the towel and continue in the company of mine, as planned from the beginning. After dinner after a near perfect day, it consisted of chatting surrounded by friends. 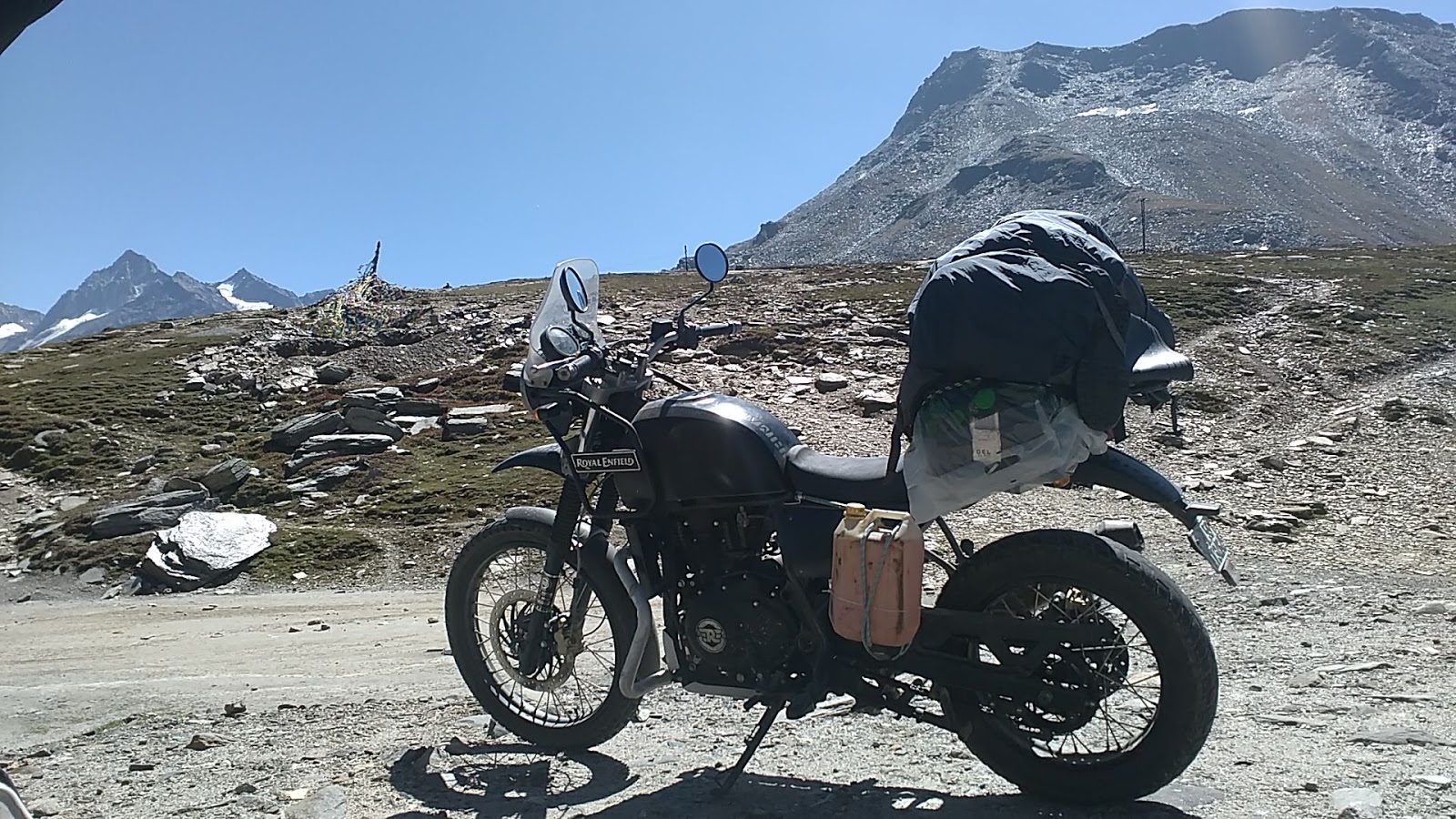 After the reflection day under my helmet, once I was sitting on that immaculate bed, I breathed again. I decided to relativize as I have done so many times in my travels, in my life and I decided to continue having a good time, my partner and my friends.

I looked out the window while the rest of the team began to climb to the balcony that gave that small and new house-hotel, facing a deep valley full of life. A huge cow accompanied by a curly antler curled up a narrow side road to the main street, and they seemed inseparable. Surely they lived together since they were born, sleeping leg to leg in the same narrow barn.

Some women smiled shyly as we exchanged glances from their wooden windows. The sun was beginning to fall and the noise of the glass bottles full of fresh beer and the voices of my friends, made me leave that trance and return to reality. Upon returning from Mana we decided to return to the neighboring town of Gauchar and fulfill the promise.

We brought them dessert for the ceremony and the village children were delighted that we returned. They take us on a tour of the town. With all the attention given to us by adults and teenagers, we reject invitation to eat in town houses. The food was after the dance and it would have been midnight on the other side of the river. We return to Gauchar, rest and prepare for the return to Rishikesh.