I kept Udaipur in my memory as one of the cities that I liked the most during my first trip to Rajasthan. That is why, when I was in Bikaner, my route plan changed. I decided that Udaipur had to return, even if only to contemplate once again the sunset over Lake Pichola.

Udaipur has received me exactly as I remembered it. Its white terraces continue to reflect the sun's rays although to a lesser extent. Octopussy is broadcast in many restaurants at seven o'clock in the afternoon. The image of the Palace illuminated at night still far exceeds the visit of its interiors. And, like three years ago, my favorite time is still the sunset. Women go to the ghat to wash clothes, while children soak and rinse between jumps and somersaults, turning an activity as routine as grooming in all a game.

In the past days in Udaipur, I have been able to relive all these memories, and also create new ones, such as the visit to the Jain temple of Ranakpur. It is one of the two classic excursions from Udaipur together with the fort of Chittorgarh.

But, at the same time, Udaipur has also shown me a different face. The quiet city that I remembered was dressed up for the Navratri, which was coming to an end and was saying goodbye in style. During the last days of the festival, the ghat has been invaded by dozens of statues of Durga. While every two by three the streets were cut by the passage of a tractor carrying another statue and followed by a crowd dancing to the music that threatened deaf to all.

A couple of days ago I commented on Facebook that there is no place that day after day surprises me as much as India. This country is crazy, for the good and for the bad. And if there is anything in which the Indians are insurmountable, it is in the celebrations, whatever they may be. 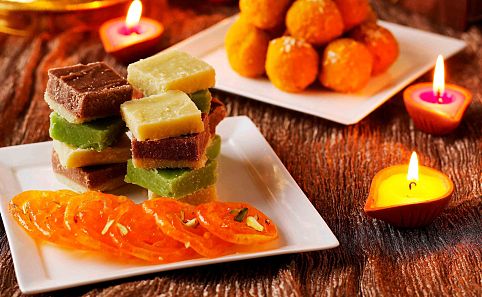 Also, it seems that there is always a reason to celebrate something. Last Thursday, for example, with the Navratri already finished, naive of me I thought that tonight I would finally sleep peacefully. Well no. Thursday is the day of Hanuman (the monkey god) and from eight until twelve at night, in a temple located under my hotel, a group of men and boys were dedicated to repeating mantras marking the rhythm with some drums. One of those (recurring) situations in which you think, and then you laugh hysterically because you know there is no possible solution.

I'm starting to digress, so I'm going to focus on the subject. I wanted to show Udaipur dressed as a party, but to reflect everything seen and lived these days I think the words fall short. As they say that a picture is worth a thousand, this time I will make a silent post.

There is that explosion of color, to those babies observing with their huge eyes all the madness that develops around them. There are those other babies that in spite of madness sleep deeply in the arms of their mothers. There are those men possessed by God. Then there are the parallel acts of the hijra (the third sex) entertaining the citizens with their dances and jokes.

They make use of the imagination, deafening music, shouts, and laughter. I stay from morning to night, and maybe you can get an idea of ​​what the end of Navratri has been in Udaipur. I can not think of a better way to transmit it.