In February, I had a wonderful trip to West Bengal, to Kolkata (which for my generation is still Calcutta) and to Shantiniketan. On the occasion of Basanta Utsav, we took a train at the Howrah station and went to Santiniketan to enjoy Holi, the festival of colors in Bengal.

The celebration of Basanta Utsav was started by the famous Bengali poet and Nobel Prize winner Rabindranath Tagore. Inspired by the spring and colors of Holi, he presented the occasion as an annual event at his Vishva Bharati University.

During our entire stay in Calcutta, we were full of adrenaline, with the body loaded with so much excitement and new experiences. We arrived at the station, all crowded with people. We sat on the floor, while people looked at us with curious eyes and smiles of admiration. It was fun! 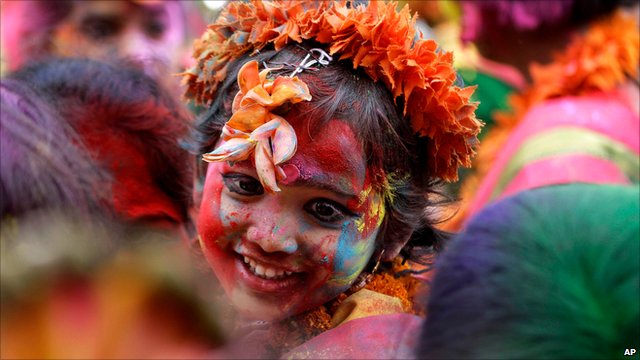 In the train, we travel in first class. The train finally started, and there are no stops until Santiniketan. We continue without any problem while standing on the platform of the train adds some more adventure. After arrival, we immediately plan to discover the terracotta temples. The rental car is an old ambassador car without air conditioning.

I can finally travel with the arm in the window, breathe and feel the air. In the surrounding countryside, we discover villages, very far from the tourist circuits. Here the temples continue to accompany by their presence and their beauty the daily life of the inhabitants. Often people have built a new temple in front of the old.

It is difficult for me to understand exactly the status of these wonders in the minds of the inhabitants. It is evident that the villages breathe all their beauty through these human-sized temples. We see the simplicity of the country life.

The arrival back to Santiniketan was beautiful, with a sunset sun in a green population crowded with people everywhere. First, in an all-terrain vehicle, we went to leave our things in the guesthouse. Tireless, we went to a market where some musicians cheered with typical Baul songs of the area. It was already night and we could not see anything to buy, because there was no light. The full moon of Dol Purnima came out and the thing had a lot of charm.

We went to the university where they are still teaching, just as Rabindranath Tagore once did, under a tree in a circle around the teacher. We went to the restaurant nearby. Right there on that street, we bought colors, a bag of powders of a different color, all for the next day. Once the moon came out a great bonfire is lit for the Holika Dahan.

Holika is represented by a statue that is placed on the top of the bonfire. Before the fire, people gather to pray and sing. People walk around the fire throwing sweets as offerings as also dried cow dung which is used for combustion and as a sacred offering. As the fire is consumed the ritual come to an end.

We dined on the terrace, while a few college students play the guitars, for a change and sang some songs in the light of the full moon. It was a pleasure to hear the Rabindra Sangeet songs to the tune of the guitar. The words carry much more meaning due to the time and the place. 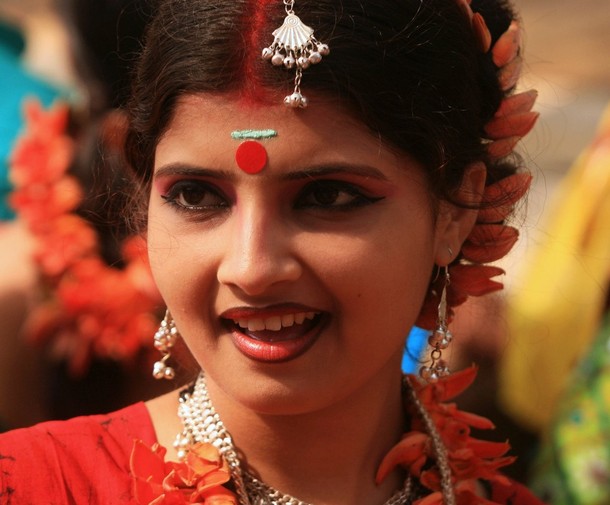 Our alarm clock woke us up at 7 o'clock in the morning. We have a cup of tea and have a shower. We put on the oldest clothes that we had and we started. As soon as we got out on the street, a young woman in a rickshaw stopped and painted a red mark on our forehead. We, in turn, painted a yellow mark on her face.

When we came to the main street, there was already a torrent of people coming and going. Seeing us so clean, they stopped and painted us. Of course, always to the cry of Happy Holi. But how could it be otherwise, we also painted them. This scene is repeated almost continuously. I throw colors on you and you throw colors at me, but with a smile and a warmth that it cannot be called more than the festival of friendship.

Back we took a rickshaw and went back to the market where now we want to do some shopping for handicrafts and traditional clothes at a cheap price. We continue along a path and arrive at the place, which was a bar where we sat down to have a drink. The image was idyllic with fields in cultivation, buffaloes walking around and women in saris with baskets on their heads.

We continue walking and we arrive at a temple where the priest utters some mantras. On the way back in an alley I heard some music. I approached and I saw some musicians with very strange instruments for me. They played melodies of the most cheerful note. A few people danced to the tunes and immediately invited me to join the dance.

Although they considered that I was not colored enough. So they threw a whole bag of paint over my head, turning my hair into blue, a touch of the most psychedelic. The rest of the group joined the dance. With so much joy friendship, dancing, and music, it is difficult to explain the emotion.

Back in the guesthouse, the only solution we saw to be able to remove all the colors that we had on was based on hoses in the patio of the house. Once cleaned and with the traditional clothes that we had bought at the market, we ate a lovingly prepared meal by the wife of the guesthouse owner. When we finished we sang some songs. And so our stay in Santiniketan, the cradle of Tagore passed too soon. 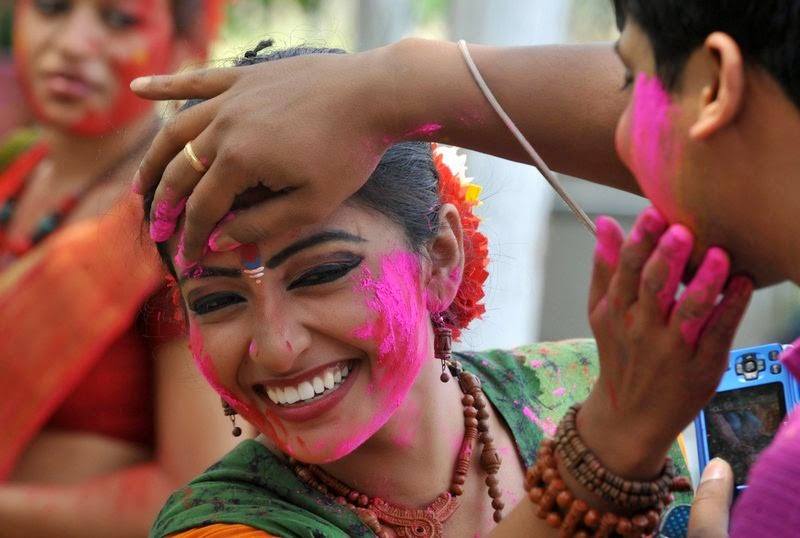