Previously, we told you about the myth, the legends, and the reason for Holi, the colorful celebration in India. We also talk about the rituals and the different moments of Holi. The spring festival is celebrated mainly in Northern India. In the other parts of India, it has a different name, such as Phagwah or Dol Yatra in the east and Kamadahana in the south. You must have already seen an article or photo of this festival, where children but also elders are on the street with colors on their faces! The Hymn For the Weekend video by Coldplay is a great reminder of this festival.

But, as we promised, today we want to share our experience. As we had already experienced Holi in New Delhi and Calcutta, we decided to celebrate Holi in the city of Jaisalmer, in Rajasthan. A bit because the full moon of purnima found us there and another bit because we wanted to discover the way the festival is celebrated in Rajasthan.

The night before Holi we went out with the intention of having dinner. But we found small bonfires of Holika Dahan in the street corners. The men sang, the women applauded and the priest recited something in sanskrit as the fire was gaining pace. Everyone seemed to wear their best clothes and everyone invited us to join the ceremony. We sat with them and then we circled around the fire.

I do not know anything about the city. But I know that the next day it will be a big party that I have dreamed of seeing for years. The photos that the tourists take are fantastic and I really want to take part in this festival of colors. It was still a difficult night where we did not sleep much, mainly because of the outside noise.

Early morning we went out to see how things were. Basically, when I ask at the hotel the best place to celebrate Holi in the city, the receptionist give the address of a place where only tourists can enter! So I decided to just walk around.

Being 9 am and without having walked 5 meters we are before the first armed group with colors. We wear white clothes that is customary to wear in Holi. To the sound of Holi hai and Happy Holi my hair was dyed green. Unlike what we imagined, it was not just a battle of colors.

The Happy Holi is accompanied by a caress on the forehead, cheeks and head. With respect they asked me if I wanted to play with colours. What was the point of refusing, as every step we took was going to be the same. We reached the corner and a boy gave us his bag of powders so we can now play with colours too.

And there we were armed with powdered colours, throw it in the air, smiling and dancing to the beat of the latest Bollywood songs. The Jaisalmer Fort has a sort of central square that was the perfect setting. The golden sandstone of the walls makes each color stand out more. We find men and women in glasses, mustaches and saris all dyed alike. There were women on the street, but always accompanied by their partners.

The bhang was there, but it was not a source of alarm. It was very diluted and the children were drinking too. Let's say it only served as exciting. We decided to try and we too many things we had to do. We through colours, close our eyes when the dust came to our face and try to take a picture in the middle.

Everyone was very respectful. Nobody coloured us without first asking us for permission. Some just touched our faces and our hair. We get back to the hotel and go in the shower to clean all the colours. In the evening we attend the party that the hotel has organized. 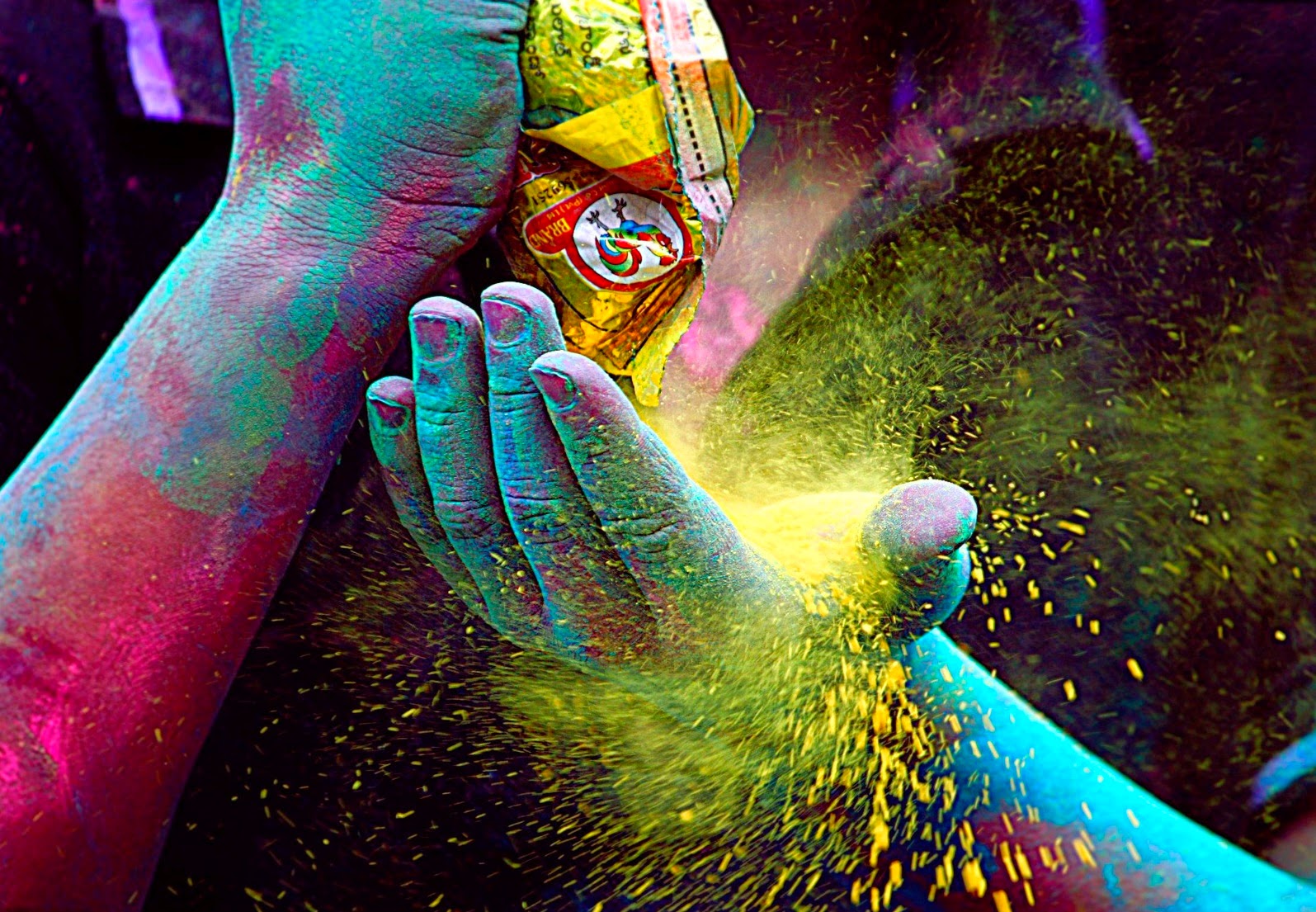 I headed to Pushkar. Already, when I arrived, I was told that there will be one or two other Holi festivities. I did not pay attention because there is only one normally and only once in the year. But Pushkar is a city apart in India. So I had the chance to attend one of them while the tourists were already gone! And I was very happy!

We took care the day before to buy powders of violet, green, yellow and pink color to celebrate Holi as it should be. We are armed and ready to face the locals! I had an amazing party with locals! We start wisely with the children around the hotel. They apply colours on us to our heart's content and so do we with a little caress of violet powder on the face of one, a rose on the hair of another, a little water pistol on a third!

We resume our journey and we get to the heart of the party. Two blue hands arrive on my face, then two reds, three roses, a green. I note that it is a transgenerational but masculine party. The women observe on their doorstep and do not participate in the spray of powder. Men give themselves to their heart's content.

Some are very gentlemen and soft, while others are quite brutal and perverse. The elderly are the most touching. It is funny to see them colored and armed with their little bag of powder like the others! Later, we go to the temple of Radha and Krishna, who is represented by a tiny idol.

After two hours, hundreds of Happy Holi wishes, pounds of powder on our head and body, hundreds of smiles, soiled clothes, we return to the hotel for a good shower. Half an hour will not be enough to get rid of all these colors. We have a nice Indian lunch with special desserts like gujiya. After the meal, we have a little rest at the hotel to recharge the batteries a bit and get ready for tonight's dance party.

In the evening we prepare and reach a large room that is mainly a wedding hall. The DJs start the evening show, and during two good hours, several very strong musical hits resound in the room. Dances follow one another. We were very shy about going on the floor and we refused 1000 times. Finally, after these 2 hours, the meal time has arrived and as usual, we have a hearty meal. Then we get back to our room.

Holi is to get being children again, getting dirty, and wet, as well as dance and laugh as if the world ended there. At least once a year, neither debt, nor indifference, nor caste nor reincarnation matters. Once a year we celebrate being alive.