After Delhi, we move to Jaipur, crossing the arid landscape of Rajasthan. The highway is peculiar. It is accessible by tractors, bicycles, scooters, animals, auto rickshaws, and cars. And sometimes there is a pedestrian that crosses calmly. Along the way we make a stop in Abhaneri, where we are struck by the wide stepwell and the bevy of children who descend from their school bus.

There is a trailer pulled by a tractor driven by a young boy almost like them and they run towards us. In India, every means is good to move. Then we continue to Galta-Ji, the temple of the monkeys. According to the locals, tourists are attracted to this place only for the colony of monkeys that lives there.

So they do not take care of the building. It, in reality, deserves attention for its originality and for the attention to detail. However, there are a lot of monkeys. They bathe in the pools full of water of the Ganges (so the legend says, even if the river is many kilometers away).

Jaipur is all of pink stone, like the very special Hawa Mahal, the palace of the winds, but the main attraction is the Amber Fort. After a tail made eternal by the dozens of sellers of umbrellas, elephants, bags, we settle on an uncomfortable elephant to climb to the fort. We enter the royal entrance and, as happened to the emperor, we are welcomed by the music.

The building is amazing. Inside the typical walls of a fort, there is a sumptuous and unexpected marble palace. We return to the jeep-bus, chased by sellers who have already packed special albums with photos of all of us in the elephant. To recover a bit from the heat, we holed up in a workshop (with the usual polar microclimate) to watch the carpets.

We go on a tour of the Jaipur market on a tuk-tuk ride. We are eight on a tuk-tuk for three, now we feel a bit local. Jaipur is too hot to do anything. So we slip into a store (strictly air-conditioned) and take the opportunity to buy some souvenirs. The women sit to apply mehndi, a drawing on the hands with henna. Women embellish the body on special occasions and is a souvenir to take home.

Throughout India and especially in Rajasthan, an intricate pattern of lace, a composition of floral textures and lucky symbols of great effect is painted on the skin. After photographing the sunset, it's time for the whole group to sit in a circle to have rice and vegetables and several sauces.

Once the dinner was over, they entertained us the night with chants and percussions using a water drum and a dish like a chaston. It's time to sleep looking at the stars and close the mouths so that we do not get any beetles.

After a good sleep, it's time to pick up, load everything and return to the jeep. At 11 in the next morning, we finally arrive in Jaisalmer. The last passenger climbs and the driver forcibly close the door and we squeeze a little more. A horn honks, a cow, a group of children and an old woman, everyone runs and we finally get going.

The walled city is behind, if I try hard I can still see it in the rearview mirror. He knew how to be a strong person, he knew how to be a living and refuge in the middle of the desert. Stacked bricks and stacks of yellow sand make it look like a golden mountain. It's funny, we saw blue, pink and now yellow cities.

In Rajasthan, colors and forts are common currency. The narrow and crowded streets are an almost typical scene where vendors of chai coexist with monkeys and cows, with dogs and with clothing and souvenir shops. A temple, a figure of some God, some believer who prays and lights an incense. Women chat and cook, travelers take pictures and children play ball, all in alleys one meter wide.

We have to look up a lot to find the sky among so many balconies and windows. It is enough to bend badly in some intersection and lose yourself completely in labyrinth size. The Hindu and Jain temples are shown in every alley we take. It is magnificent both spatially and temporally. History inhabits places and it is impossible not to consider it another variable to visit.

More than looking for sites of tourist interest, we have fun looking for the history that builds each place. That the desert, that the reign, that the Maharaji, that the war, that the peace. But the fort of Jaisalmer was left behind. From the city streets, we passed an empty and arid route. Sand everywhere, we scatter bushes and camels that cross in front of us. There are no traces of the fort, of the route, either.

Electric windmills are seen in the distance. Small constructions of yellow bricks give an account of traces of human life. Finally, we reach a small dune and the car stops. It would be impossible to specify why it stopped there, all the bushes are the same, all the dunes are equal, nothing indicated that it should stop there. But he did, and the driver made us get off the vehicle. It was 9 am and the heat suffocated us.

We quickly understood the need to cover the sun, leaving only our hands outdoors and a gap to see at eye level. Suddenly, behind the dune appears a man with a scarf and tunic, reminded me of the Bedouins I saw in a documentary on television. Behind the man stand 4 tall camels. They only carry their humps, but they carry water drums, blankets, and food.

Climbing the camel was not easy. Whether one is more or less tall, the camel is always taller than one more seated than this one. Not for nothing, the cameleer insisted that we should hold on tightly with the strips and with a simple whistle, the impressive animal first raised its two front legs, leaving us in a rather inclined plane and then raise the two rear. In this way, we resume an unstable equilibrium.

Thus we begin to walk. All in a row, bending behind some dune to then get into another and so on. The heat overwhelms. The water is hot, the head is bulging and the discomfort of sitting for hours on a hump begins to feel. Explaining the immensity of the desert is not simple. Because the desert is everything.

It is each of the cardinal points, it is the horizon and what is under our feet. It can also be the despair of being trapped in an ocean of sand that has no end, or it can be calm and tranquility based on its absolute silence. The shadow that we give from the camel is getting longer and that gives us the guideline that it is starting to sunset.

The sun, enemy, and source of life of those who inhabit the desert, begins to disappear. When the windmills, the water dumps, and the bushes were left behind, when we are only in the middle of an infinite amount of dunes, the camel stops. Here we stop, here we sleep. Here, where there is nothing else, more than the sunset.

It is the immensity of the sky, next to the eternal undulations of the sand, a guideline of the minimum we are in front of such a landscape. We know nothing of the desert, of the night, or of the day. We can not orient ourselves, we can not walk in the sand, we can not recover after so many hours on camels. But there we are, fascinated with that infinity of stars that we see with only a slight raise of the head.

We arrived in the desert heart of Thar, just 20 km from Pakistan. There begins a network of invisible roads that can take us to Persia in the silk route. Just thinking about the history of the sand that slips between our fingers gives us goosebumps.

The people who lived in those ancestral times in the Thar desert covered their hands and feet with a paste made from henna leaves. From the first moment they noticed that as the color remained on the skin, the temperature of their body remained low. It helped the women who used this temporary tattoo to cope with the relentless heat. With the passage of time, the ladies began to experiment drawing a whole series of complex but very beautiful designs.

Difficult to make and very different in shape, the mehndi decorations are specular from one arm to the other. They express an artistic language in which each form has a meaning. The peacock is for beauty, the swan is for success, dragonflies and butterflies for the rebirth and change, the leaves for devotion, and the cashmere motifs for fertility.

Traditionally the mehndi is applied in various festivals, in particular at weddings. Before the ceremony the bride (sometimes even the partner) lets herself drawn in hands and feet in a real ritual. The young woman is surrounded by women of the family and friends, and tattooed with henna, while the older women reveal the secrets of being a good wife.

The tattoo accompanied by graceful movements will serve to seduce the groom during the first night of love, but it is also a symbol of luck. It is thought that the more the embroidery resists over time, the more the couple will be happy together. An integral part of the celebration of Karva Chauth is the endless mehndi designs. The henna artists were originally from the Nai, the barbers' caste.

And without being able to separate our sight of the sky we went falling asleep. On the sand, covered with blankets and shooting stars. Throughout the night we woke up to go back to sleep looking at that unpolluted and silent sky. We need to corroborate that we were indeed there, in the middle of those dunes, somewhere in the desert. 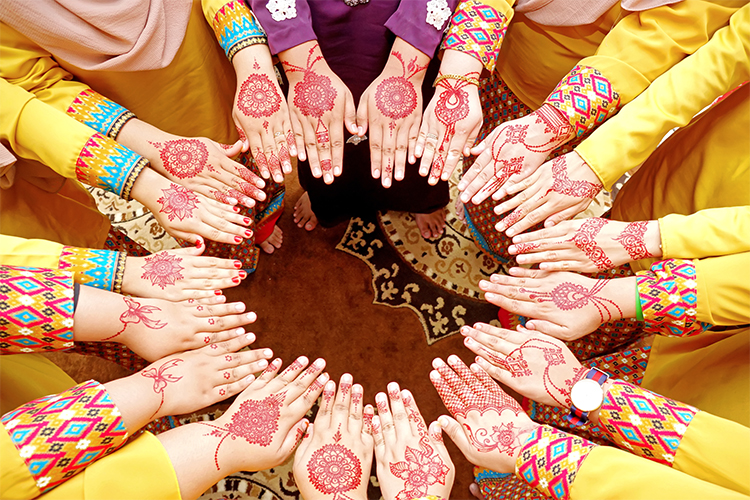 The first rays of light woke us. We had no other stimulus than nature and its magnificent simplicity. As if the scene were repeated, behind a dune appeared the man with the highest camels, we had to start before the heat increases. The times in the desert are marked by the sun.