I just returned after a stay of several days in Iceland during the winter solstice. In December low temperatures are already well established on the land which is also a country geographically half Europe and America. What's in winter in Iceland, other than cold, freezing wind and ice? There are some primeval landscapes, a magical and fleeting light, and almost no tourists. And with a lot of patience and some luck, perhaps some aurora borealis. In fact, it was the main motivation for the trip. It was all very tempting for a photographer.

Winter travel in Iceland has its charm. They are auroras Borealis or northern lights. You can enjoy the snowy landscapes and the best-known traditions of Icelanders since summer lasts only three months. For me, the best days are after a heavy snowfall, as the sky shines like opening the contours of the fading city. Children enjoy it very much.

If you visit Iceland in winter, chances are that you can see the white Christmas like in Christmas movies. The houses are colorful with maximum two floors. Outside of Reykjavik, in rural areas, there is snow in abundance. Every morning snowplows pass through the streets and bike lanes. I do not know who would we be without them.

I find it very romantic to drink coffee and look out the window or sit on the couch and read, listen to jazz and drink a glass of wine or beer. We love bathing in very hot water. All pools have jacuzzis, mostly outdoors. The good winter in Iceland is also surrounded by snow and we watch northern lights in the sky. 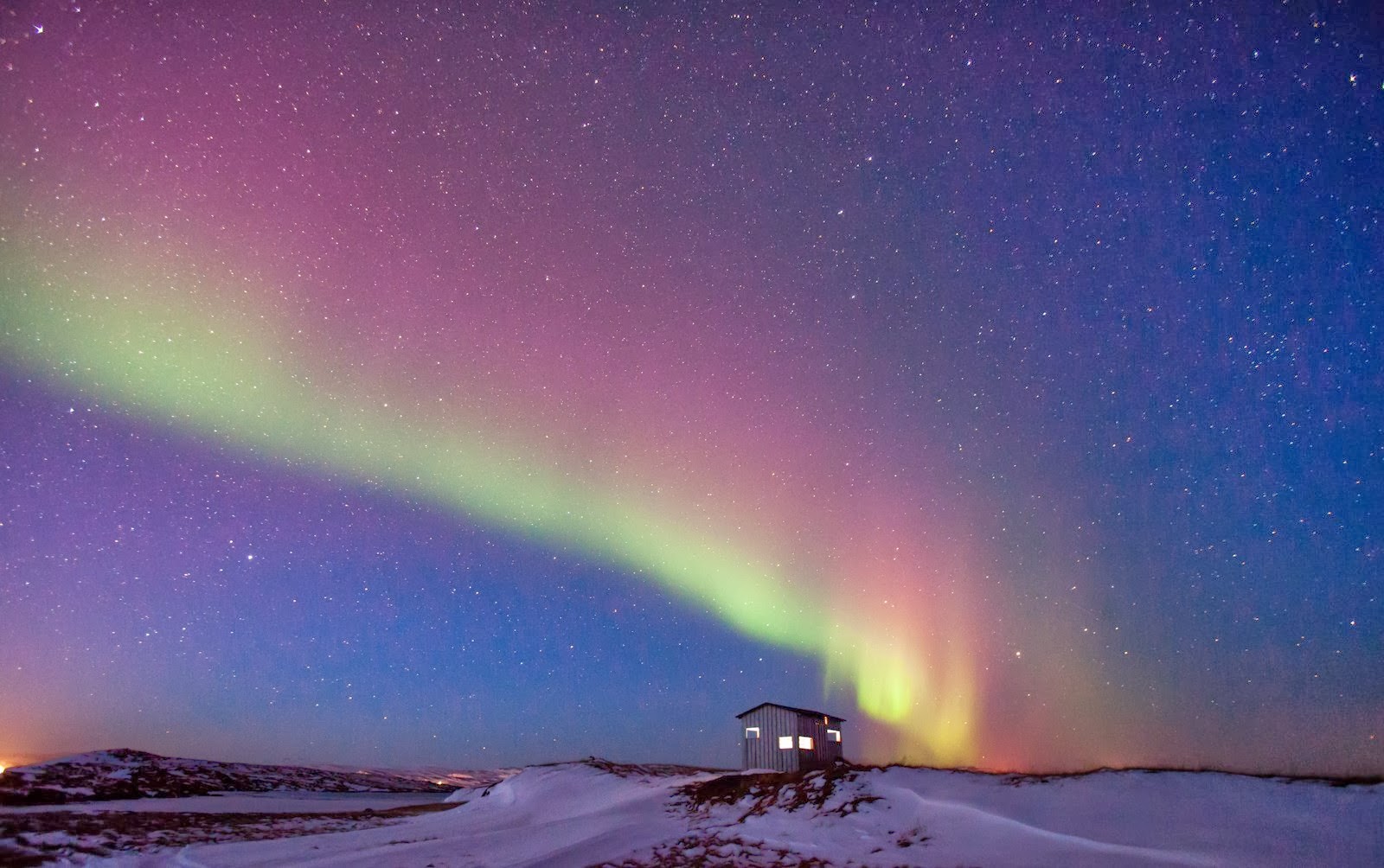 When does winter begin in Iceland?

The winter in Iceland according to the Old Norse calendar begins in October between 21 and 27. This day traders in the downtown street of Skolavordustigur invite everyone for beef soup. This month is called Gormánuður. The Viking calendar distinguishes only two seasons: summer and winter.

But shooting at this time of the year on a destination bordering the Arctic presents its difficulties. First, the few hours of light. After a long night and a long morning sun peeked over the horizon at about 11:30 AM in the morning and hid back by 3 PM. Then, every night we went out to the field several hours in a stubborn attempt to observe auroras. The lived excitement and jumping for joy at the first sight of the northern lights remain among our fondest memories.

The second problem for the photographer is some pretty severe weather, although they were expected given the latitudes where we were. Both during the day and night temperature range between -1 and -3 ° C, down to -11 sometimes. Although we are accustomed to such temperatures, the fact is that the combination with the constant winds between 35 and 90 Km/h subjected to thermal sensations equivalent to -15 to -30 ° C, which was quite harder.

It was also impressive driving both day and night on roads and tracks in full blizzard or sandstorm. But to me personally these extreme conditions motivate me even more and I've always enjoyed them. I demonstrate the strength of wild nature and sometimes are the way to get images out of the ordinary. So I had to use shutter speeds and higher ISO than usual. Fortunately, my camera allows shooting at high sensitivities with low noise and an image stabilizer.

Clothing to Photograph Iceland in Winter

One of the most troublesome things to work under intense cold is clothing. Outside we had one or even two thermal tights, plus a high mountain pants and other waterproof up to stop the wind. In the upper two thermal shirts under a fleece jersey, and a thick jacket fleece and down anorak or wind jackets (even at times both at once). A thin thermal gloves under mittens fleece for hands and cap with fleece insulate us. The 4x4 car we rented was, besides our means of transport, our shelter from blizzards and low temperatures in Iceland.

With the cold and wind, everything is more difficult and, as we work frequently at dusk and night. Sitting on a comfortable sofa with a cup of chocolate, wrapped in a warm flannel blanket and a house of solid walls. And you are near a window receiving the light passing through the glass, you will feel even more comfortable.

I had long wanted to live it, not another destination, but to experience the freezing cold and the polar night. With only 5 hours of dim light of the sun, near the sinuous profile of the horizon of snowy mountains around us.

Since the December 21 winter solstice began, temperatures are negative and at this time, will fall further, reaching approximate minimum limits of -40º C or even less. Each year at this time, the inhabitants of the northern lands of the northern hemisphere or Boreal enthusiastically celebrate the return of the sun.

I fly to Norway to experience the polar night and the first frigid winter storms beyond the Arctic Circle. I live there for a few days in a small cabin of only 8 square meters with the basics and two bunk beds, a table, and 4 chairs. Once there we visit the area and take photographs. We also indulge in other sports, mountain and ice climbing.

What is the polar night?

It is the eternal night, in the days pass without sunlight. This effect is due to the tilt of Earth's axis, therefore, in the Geographic North Pole (where it crosses the Earth's axis), sunlight does not reach this point for three months a year. There is no dawn (sunrise) and sunset (sunset). As we go down latitude, 'traveling to the South' that time of darkness become lower, reaching nearly a month in the Arctic Circle. In the area in Norway this astronomical event occurs, we were between the boundary of the almost total darkness and very little daylight.

From Norway to Finland

An eternal night? Between 20 and December 23 each year, in northern Finland, almost so. The sun rises shortly before 12 am and goes to sleep less than an hour later.

This is the winter solstice, to a world famous midnight sun. In southern Finland, on the solstice day there is about six hours of daylight. However, for long distances with the north, the feeling is much more extreme in Lapland. Winter can be very hard in northern Europe. The cold and lack of light cause a lot of people see the solstice with hope.

The legend of the longest night

In northern Finland and Lapland lands in general, the Samis had the tradition of sacrificing females of their livestock to the goddess of fertility, love, spring and the sun, the Beaivi. The festival celebrated on the day of the solstice is known as the Festival of Beaivi.

On the day of our departure at the airport, we had no idea of the mess we got into. We were returning exhausted, but happy with what we had seen and photographed. The auroras were very shy, but we saw landscapes and had experiences that had been very satisfactory.

The simple return home became a new journey within the journey. Heavy snowfalls and ice that were affecting northern Europe had left many closed or highly affected airports. Our plane left Iceland with eight hours late and when we stopped at Gatwick airport and London, we are plunged into total chaos. All flights canceled and hundreds of thousands of travelers caught in the UK.

After our initial shock and despair began a marathon search for a way to escape from the British Isles. It became a challenge. We find no ticket on any plane, train or coach before Christmas. Apart from many roads of England and France were cut off by snow and ice. With the help of laptops and credit cards, and thanks to the experience of organizing trips, we got a room in a hotel, a precious commodity in those moments of chaos in which thousands of people had sleeping on the ground of British airports.

This had been the longest return of our lives, for one of our shorter trips. In life a travel photographer may never know when a normal path will become an ordeal. The good thing is not to despair and even learn to enjoy it.