We had Marrakesh in mind for a getaway for some time. The Moroccan country attracted us a lot for its food, mint tea, harira soup and the possibility of a trip with cheap flights was always there. But, at the same time, there was the concern about a different culture. We had some days of vacation that had to be spent before the end of January. We do not like the cold, and after shuffling several destinations, we finally decided on Marrakesh.

As it is low season, the flight was very cheap. We booked a riad in the medina through the booking website. I read many Morocco travel blogs and guides, where there is very good information. And to complement, I bought the Lonely Planet Marrakech travel guide, that was very useful to us. I also download the map, although in the streets of the medina there is no map.

Our flight was on time and at 5:00 p.m. we landed in Marrakech. After filling out the form for immigration they seal our passport. We picked up the suitcase, and we went out to find our driver. In the end we left but being in the afternoon, we cannot go through the square. The driver left us a little further and he called a smaller vehicle to accompany us to the riad.

Here we had a problem. We had not changed to dirham. In the end we ended up telling the owner of the riad to give us change and we paid the Dirham. The Riad is very well located, as we later found out. Otherwise, it's nice and the rooms are simple. The owner showed us the room, gave us the password of the wifi and we were free.

Although I read that they gave a welcome tea, but we did not have it, nor did they give us any information. The owner was friendly but very dry. Once set, we head towards Jemaa El Fna Square, the nerve center of the city. At that time it was almost dark and we took a walk. The first lesson is that we have to learn to dodge motorcycles and bicycles, which go by rubbing us and sometimes we do not even notice until they are over us.

We toured the square seeing its main characters. It's like a theater, that every hour represents a different function. At that time there were almost no monkeys or water carriers left. The musicians were playing in small groups. There were the henna tattooers, and the food stalls. The orange juice stalls invite us at every step.

We exchanged money at a hotel, almost in the square, in one of the streets that comes out of it. At night, we went to the Kutubia, to see closely the minaret of the mosque. There are horse carts, offering to take a walk around the city. There is also bus stop, which goes to the airport. Back in the square, smoke could be seen coming out of the food stalls.

Although it was not in our plans to eat at the stalls in the square, we walked around there. In all the places we were besieged to eat there. We even had problems with a kid who insisted that we look at the menu of his stall, who ended up insulting us. I must say that it was not far from the general tone of the treatment we received there.

I understand that it is an isolated case although on our first night we felt terrible. For dinner we went to a famous one located at one end of the square. Its interior is like a palace, with several rooms. The lighting is dim and on the tables they put candles. Even though the night was cool, we sat on the terrace, with views. First we took a natural orange juice.

We ordered an avocado shake to drink, harira soup, a chicken couscous, Moroccan lamb tagine with plums and almonds and a pastry. The harira soup was prepared with legumes, meat and vegetables. It can be taken all year round, although it is typical of Ramadan. Everything was very good, although in the pastry they put too much sugar on top for my taste (that's the way it was everywhere).

The waiters are very friendly. During the dinner there is live music and they do belly dance show and a woman who danced with a tray on her head full of candles. The atmosphere is fabulous and the food too. After dinner we went to the riad. We were frozen on the terrace and it was hard to get warm again. 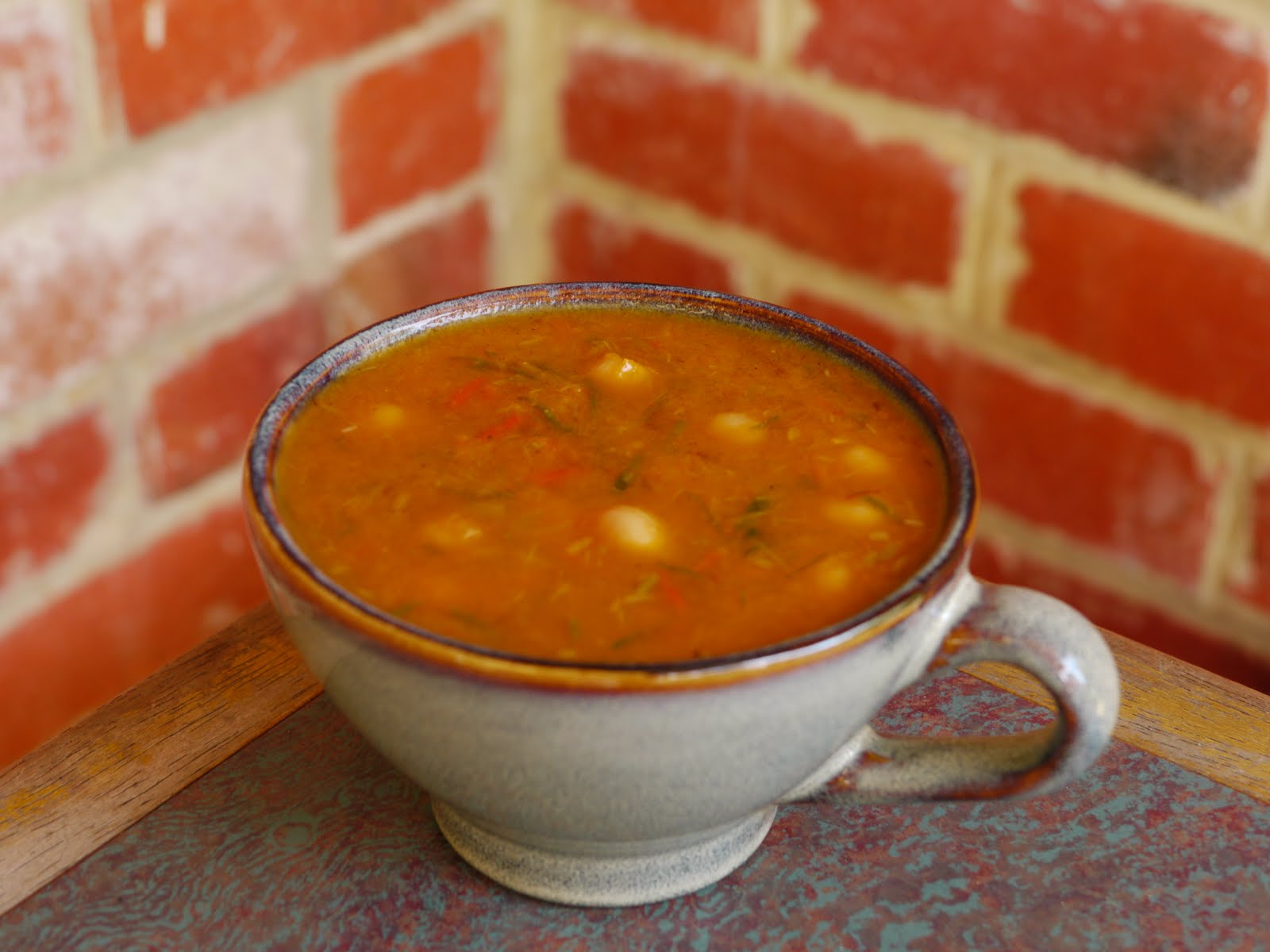 The day started with a rich breakfast served in the courtyard of the riad. There is orange juice, tea, coffee, yogurt, bread and pancakes with honey and different jams. Afterwards we went down the Riad Zitoun el-Kedim for the first visit of the day, to the Saadian tombs. We take a little walk in the medina, very quiet compared to the previous night. Many shops had not yet opened and others began to unfold their charms facing the street.

We arrived at the Casbah mosque, where we stopped to take some photos. And right next to it is the entrance of the Saadian tombs. Despite the saying that no one takes riches to the grave, Sultan Saadi Mansour el-Dahbi tried in the 16th century, with this luxurious burial. We see a simple courtyard and three richly decorated rooms. The most beautiful and spacious of all is the room of the twelve columns.

When we finished we took a walk along the streets of the Casbah, which surrounds the wall inside. It is an oasis of tranquility compared to the medina. We arrive at the Royal Palace, which is the residence of the King of Morocco and cannot be visited. We approached a little without knowing that this was one of the entrances to the palace, and they immediately threw us out.

So we retraced our steps and went to see one of the gates of the wall, Bab Agnaou, which is very close to the Saadian tombs. From there we went to El Badi Palace, near the Place des Ferblantiers. The palace is in ruins, but in the sixteenth century, when it was built by Sultan Ahmed el-Mansour it was paved with gold, turquoise and crystal. 75 years later it was completely looted, and little can be seen today of that splendor.

In spite of this, we go for a walk through the large patio, go up to the terrace where the storks nest, and watch a video that recreates how the palace should have been in its days of splendor. Then we went to Bahia Palace, without doubt one of the most beautiful buildings in the city. Built in the 19th century by Ahmed ben Moussa, grand vizier of the Alawites, to live with the 4 wives of the Sultan and his 24 concubines.

Several rooms and several courtyards can be visited, while another part remains closed for private use of the King of Morocco. It is clear that some courtyards were designed for the summer, dark and full of vegetation, and others for the winter, very sunny and diaphanous. The wooden ceilings are impressive, with beautiful colors and at different heights.

Also the decoration of the walls in addition to the beautiful tiles. It is a visit that we really enjoyed. We went back to the square and went to eat at one of the recommended restaurants in the Lonely Planet. It is located in one of the corners of the square, and it is quite cheap. We went up to the top because, although it does not have a terrace, there is a window towards the square.

We ordered a skewer, which was served with rice, chips and salad, and a lamb tajine. To drink, we have an orange juice and another apple. It was all good, although the skewer was not good as they do not serve it skewered, but as sauteed meat and without much taste. Instead of ordering dessert we went to the Bab Agnaou street, to one of the best places to try typical Moroccan pastries.

And they did not disappoint us. We went to rest in the Kutubia gardens. Although the mosque cannot be visited because only the Muslims are allowed to enter, the surrounding gardens are good to relax and take some photos of the mosque and minaret. To end the afternoon we went up to the terrace of the hotel, with good views of the square, and there we had a good time drinking tea and enjoying the views.

We see the music and dances of the gnawa, and all the color that accompanies it. We watch the many actors of Jemaa El Fna, from a good perspective and above all with tranquility. It is clear that the square does not leave me indifferent. I recognize that its life, sounds, smells and colors are very attractive and almost magnetic.

The burden of walking among vendors, food stalls, tattoo artists, snake charmers and other characters is a bit overwhelming. But without a doubt what I liked least about the place were the monkeys. We saw a tourist steal a picture of a monkey with the phone and the animal grabbed his jacket so he would not leave without leaving the corresponding tip.

After a short break in the riad we went out to dinner. We went to another restaurant on Derb Dabachi Street, very close to the square. The place is nice. There were two musicians playing, and the atmosphere was very cozy. It is somewhat more expensive than the previous restaurants we had been in, but the food was very good.

We ordered a menu of the day consisting of a vegetable cream, kefta tajin with eggs and fruit and some chicken breast accompanied by chips, salad and rice. It was all very tasty, and they also gave us seasoned olives and a little red harissa.