Asian cuisine makes extensive use of jackfruit, in typical dishes like Gujjeda Kajipu, Echorer Dalna or Kathal Ki Sabzi. It is consumed either in raw form or cooked but is also sold dried. When the jackfruit is not mature we can cook like a potato tuber after boiling it. Even the seeds are edible, only if well cooked.

When ripe, the edible part are the small yellow content in the fruit, which is often sold separately in Bengal. It is good to make fruit salads, cakes or in combination with ice cream. The flavor of jackfruit at times recalls the pineapple. After being cut the jackfruit tends to deteriorate rapidly at room temperature which is why it must be kept in the refrigerator. In countries of origin it is often sold in the markets, already cut in generous portions.

The name jackfruit comes from the Portuguese jaca, which in turn derives from a Malay word, chakka. Some archaeological findings in India are proof that the cultivation of jackfruit was already done some 6,000 years ago. The jackfruit wood is used to build musical instruments typical of Asian tradition, but also to derive the red dye characteristic of the robes of Buddhist monks.

The jackfruit is a native of India, Nepal, Bangladesh and Sri Lanka or some say the Malay peninsula. It is cultivated in Asia, Australia, Africa, Hawaii, Brazil, India, Jamaica, Suriname and other countries. In Indonesia and Bangladesh it is considered the national fruit. In southern India the jackfruit are classified into two large families of Kooza pazham, which is more suitable to the market and Koozha chakka for the consumer. There are large number of cultivars and varieties, among which is the Black gold, Cochin, Golden Pillow, Mia and Golden Nugget.

It is a very good fruit that contains a lot of vitamins and contains, in fact, vitamins and minerals, and offers many health benefits. As it has antioxidants and phytonutrients, it means that jackfruit has anti-cancer properties. Its also known to help treat indigestion and ulcers. It also has laxative properties, especially if ingested in large amounts.

The tree is home to an abundant supply these large fruits, the weight of which can exceed 30 pounds! The jackfruit has a rough and thorny skin, very similar to the durian and contain a fibrous part within which are immersed many small fruits with yellow skin. 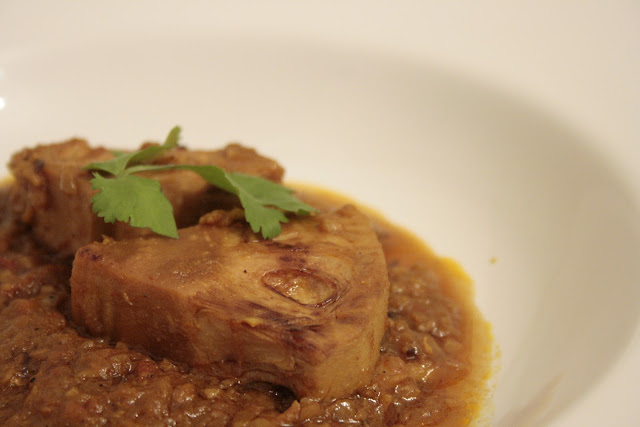 Heat the oil in a deep bottomed non stick pan and fry the jackfruit and potato pieces over high heat, till light brown. Drain and set aside.

Add the green chillies, potato and jackfruit, stir a few times before adding about a cup of water. Add tomato puree, cinnamon powder, cardamom, nutmeg, cloves, dry mango and bring to a boil and simmer till the vegetable is cooked through.