After many months of preparation the adventure begins in Canada. Although I considered going through Vancouver, the time available and amount of things to see in the Rockies led me to opt out of Vancouver. Hence the title of the blog since our trip takes place in Alberta, where in the license plates of the cars we can see the famous Wild Rose Country phrase.

We got up early to catch the first flight of the day. I was able to take out the boarding passes the day before and choose the seats. As we do not have machines here we check in at the window. At Heathrow we had to change terminals but for the huge airport it really surprised me how well organized it is.

When we get off the plane we just have to follow the purple signs that are in flight connection. They take us to some buses that leave us in the terminal we go to in 10 minutes. Once there we pass the security check and wait for the next flight.

At about 5 o'clock in the afternoon it was finally time to get on the flight, a Boeing 767 with individual little screens. With respect to the other intercontinental flights that I have taken, it has the advantage of a 2-3-2 configuration, so it is much more comfortable than the 3-4-3 of the 777 or the 747.

We took the window seat and the seats seemed quite large although the entertainment on board seemed pretty shabby. The controls cannot be removed from the seat and have little games, something that at least helps me enough to pass the time. Almost all the films are in English but with that accent with which the greatest of the dramas seems like a comedy.

When entering the plane in the seats, they leave us a pillow, a blanket and a small packet with a brush and toothpaste. From London we left with almost an hour of delay due to minor technical problems. So we had a good time waiting, although with the excitement of the trip it was not very long either. Throughout the flight we recovered great part of the accumulated delay. In the end we arrived only 20 minutes late.

As soon as the flight took height they passed by offering drinks and soon after dinner arrived, typical of the plane and not very good. I don't know why inflight everything tastes so poor. On this occasion we had to choose between beef and chicken paella. I chose the second and that pasty rice was anything but paella.

For dessert we had a piece of pretty rich chocolate cake. They gave us a glass of water, butter and a bread roll with spices and a salad. They ended up offering coffee or tea. During the flight they would pass from time to time offering juices and water. When there was little more than an hour and a half before landing they gave us breakfast, a sandwich, fruit, a kitkat, juice and coffee or tea. In this case, it was pretty good.

The 9 hours of flight as always are very long although once on land we almost do not remember how the trip was over. At 8:20 we landed at the Calgary airport. It's not very big. While we were going to collect the suitcases, we took the opportunity to take some pictures of the welcome signs.

Before picking up the luggage, we pass the immigration. The security asked us the typical questions of how long we were going stay and the places we were planning to go. When arriving at the belt with the fear that our luggage would not leave, we see they had already begun to leave. I had never seen so much efficiency, as ours went out in the first round, so we could already breathe easy.

Finally we passed a small control where we delivered the customs card that we had filled on the plane, and voila, we were in Canadian lands. Once we leave we go to the car rental company in front of the door. It is only necessary to cross the street where the taxis stop. There we picked up our car that we would not leave until the last day of travel.

In the office I was offered a full tank and I passed it because it was not worth considering the price of fuel in Canada. I was also offered to upgrade or get additional insurance to avoid paying the franchise a higher price. I said no to everything.

The car had enough space for our bags and also had air conditioning. I could not ask much for what I paid considering the rental rates in Alberta. Once mounted in the car the first thing was to place the navigator with the maps of North America installed.

After a few meters the GPS began to give us instructions and in a few minutes we were at the hotel. The room was huge and had a couple of armchairs, tables, desk, flat screen tv and ipod dock. It also had a mini-kitchen, that is, a sink, microwave, refrigerator, coffee maker and everything needed to prepare tea and coffee. The bathroom in line with the rest of the room was good with shower and bath.

After getting some soft drinks in the machines of the hotel (very expensive of course) and some ice from the free machine, we dined something we had bought along the trip. We prepared to rest. 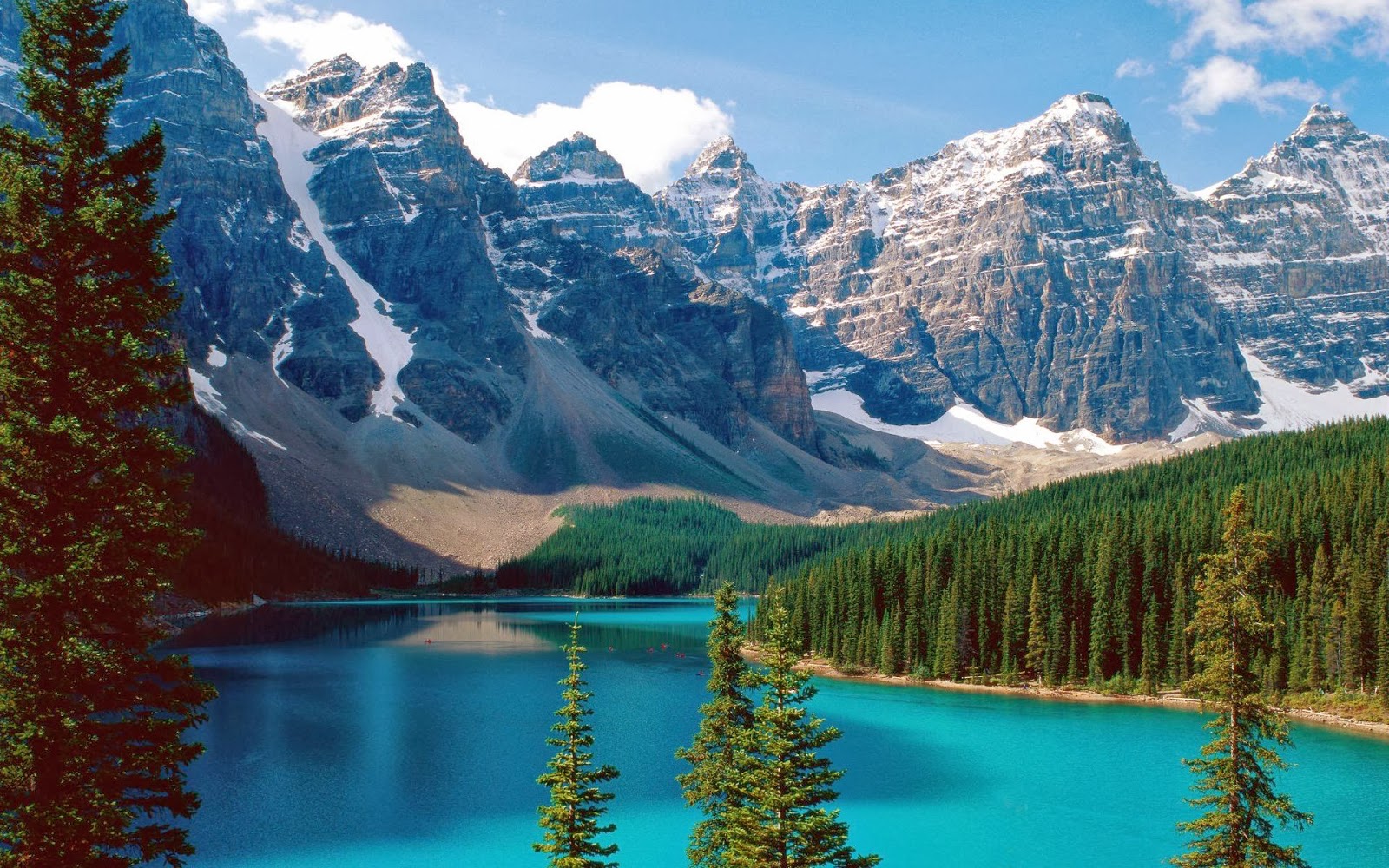 It was not hard for us to get up early because of the time change. So at 7 o'clock we went down to breakfast. By the way, breakfast was very good. There were both sweet (up to waffles) and salty items. There were juices, coffee, yogurt, cereals, sausages, various types of breads and pastries, plus eggs, bacon and sausages.

We wanted to make a technical stop in the center of Calgary to buy some things for the camping day. So we reach a Canadian store specializing in mountain accessories with very good value for money. Also, when we were leaving we saw the famous bells.

Since we were in the center and that we had plenty of parking time, we took the opportunity to take a quick tour around the city center. At about 11 o'clock we set off for Banff, a journey that takes about an hour and a half, along a freeway with very wide lanes and endless straight lines.

Immediately on the left in the direction of the march we can see the Canada Olympic Park, the place where the winter Olympics were held. There are three jumping trampolines on the top of a small hill.

As we went along the road to the Rockies several things caught our attention. The first is the size of the cars, and the rare thing is to see a normal car. Almost all are huge pickups and large SUVs, the same as those of the American movies. At about 1 we arrived in Banff. As it was early to check in at the hotel we decided not to reach the town and go to Lake Minnewanka that we had on the way to take advantage of the time.

It is a huge lake, one of the largest in the area but is not as impressive as others. We surround the lake by the path that leads to the Steward Canyon, where we find a wooden bridge. From here at this time we can not continue walking for the activity of bears in the area. On the shores of the lake as we walked we found huge banks of mosquitoes. I think nowhere else we saw so many.

Between some things and others we went to Banff to eat and settle. We left the car parked in the area indicated as parking at the end of Banff Avenue, before crossing the bridge over the river. As we were hungry we ate a salad in the first eatery we found on our way. There was also free wifi so we could look at the mail.

At 3 we went to the hotel, which I booked on the website of the hotel and did the check-in. I know it is a bit expensive but I chose the higher category room and had the advantage of being in the center of the city, a stone's throw from the shops. The price also includes wifi and free parking.

The hotel is quite good. The biggest advantage is its location and the fact that it includes breakfast. The next visit of the day was the Johnston Canyon. I had read that it is usually plagued by tourists, so it is recommended to visit it in the afternoon or early in the morning. We opted for the first option, arriving there before 5. We had no problem parking although we saw cars by the road and there were people but nothing overwhelming.

After taking a photo of the information booth to put in instagram that we usually do, we started the way with tranquility and taking pictures. In about 20 minutes we were in the Lower Falls. After the obligatory stop we continue the path next to the bluish river by the promenade enabled for that purpose. After another 25 minutes we reach the Upper Falls.

Given the time it was we decided to continue to Ink Pots but we were afraid that it would be night. So we gave up. After all we had many long walks and it was not a matter of spending all the energy in the first day.

We take a nice walk along the river, and we see a couple of waterfalls. To get there we take the Bow Valley road. However, once the trip is over we see many people. I was also struck by the Mistaya for its curves and the strength of its waters or the Maligne. Instead of returning to Banff we chose to follow the road a little to see the impressive Castle Mountain up close.

Given that they say that this is a good area to see a bear, but there was no luck in this regard. From here we returned to Banff since we still had to pay for food purchases and we wanted to go around the small shops in the center. The next day the famous Lake Louise was waiting for us.