We travel the road from Khajuraho to Orchha by car. The duration is 4 hours. Halfway we stop at one of the typical coffee shops that have a souvenir shop. We take advantage to do some gift shopping. Here it is more quiet as the sellers do not besiege us and the prices are pretty good. Since there are no tourists, the sellers, when they see one, become desperate to sell.

We also took the opportunity to drink something very cool, although in the car we brought a package with fresh drinks. Once again we are lucky to be able to enjoy our way. We go through rural landscapes. The trucks are a complete show. They are super decorated and their colors are the most striking. People take advantage of any type of transport to get around, even if they sometimes go completely crowded.

We continue our way and when we realize we are already in Orchha, it looks old but it has a super special charm. It transports us to a tale of palaces. Since it is time to eat, the guide tells us that we will eat first and then we will make the visits. We go to a local restaurant. When we arrive we are greeted at the door by a man in a typical military dress and a turban of multiple colors.

In another door there is another man playing a flute. The restaurant has a buffet option with an endless number of typical dishes. I prefer to take a few of them to try them. And if I have to tell you that they are incredible. Once we finish we set out to enjoy this magical place.

The Orchha fort has to be accessed by an arch bridge. We will visit the three palaces that are inside the fort. So we got off the van. A local guide is waiting for us. I promise I look like a prince of the one thousand and one nights as he show us his palace. He is super elegant and handsome.

His explanations is like listening to a story and we cannot take our attention away. He explains to us that it is a very old city founded by Prince Rudra of the Bundela dynasty being the first Raja of Orchha. The first palace we visited is Jahangir Mahal. It dates back to the 17th century when the region's ruler Vir Singh Deo built the structure as a symbol of the warm reception for the Mughal emperor Jahangir during his first visit to the city.

The entrance of the Jehangir Mahal, Orchha, is marked by an artistic and traditional entrance. The front wall of the structure faces east and is covered with turquoise tiles. Jahangir Mahal is a three-story structure that is marked by elegant balconies, porches and hanging apartments.

The domes of the Jahangir Mahal were built according to Timurid customs. Its large Iwans are large enough to accommodate the entrance of the war elephants, and its high position over the landscape allowed the canyons to rank higher.

Akbar sent his most influential son, Prince Jahangir, Abdul Hasan Asaf Khan and Abu'l-Fazl ibn Mubarak to capture the city of Orchha, which was considered the center of the revolt. Jahangir arrived with a force, and after many fierce confrontations and battles, he subdued Bundela's reign.

Its rebel ruler, Vir Singh Deo, surrendered to the young Jahangir and agreed never to break an alliance with Akbar. Vir Singh Deo also resigned from the control of the Bundela infantry and cavalry, weakening militarily. Vir Singh Deo later killed Abu'l-Fazl ibn Mubarak in 1602, during the succession of Jahangir on the Mughal throne, and remained a fugitive until his death.

Aurangzeb, aged 16, hoisted the Mughal flag on the highest terrace of the Jahangir Mahal. After the Mughals won the Bundela War in 1635, Devi Singh was installed as the new administrator. After the deaths of the rebel Jhujhar Singh and the Mughal emperor Shah Jahan, he declared himself the ruler of Bundela.

It is built on a rectangular base. Something that draws our attention are the balconies that are in the central part forming a line. Another point to highlight are the 8 domes that are crowned and connected between them with very decorated balustrades. Inside it housed a total of 236 rooms, of which very few were intended for the king the queen and her concubines.

About 100 of the basement were intended to house the soldiers and another 130 were for nobles and courtiers. The palace in its good times wore a coating of blue tiles and from its balconies it received its people with flower petals. In the main door two elephants receive us with one holds a bell and the other a garland. To enter we pass through imposing wooden doors with Mongolian and Indian engravings.

From here we can see the ruins of the palace that Indrajit Sing built in honor of his lover Praveen. Suddenly, our guide changes the tone, making our curiosity sharpen. He tells us the story that in one of the visits of the emperor, he fell in love with her wanting to take her to his harem. She, finely, through a song explained that she was only a second before the status of him all in an act of love towards Indrajit.

The paintings are really amazing. It is impressive. The truth that in all its splendor it had to be magnificent. In some parts we can still see the colors that decorated it. There comes a point that we do not know where to go. Another of the things that we like, are the wonderful views that can be seen from here. From the back, there are incredible views of the river.

The cenotaphs are seen in the distance, which does not give us time to see up close. They are empty tombs or funerary monuments erected in honor of a person or group of people. It is a symbolic building. The views with many remains of buildings even make images of Myanmar come to our mind.

There are many monkeys, who are encouraged to come and say hello. Sometimes they are aggressive. Some come with their babies in tow. For the main facade the views are also wonderful. We can see Orchha with a really magical color.

Next we continue our visit by Raj Mahal that also has some beautiful murals inside. It was built in the middle of the courtyard by Madhukar Shah. It was a palace that became a temple more by accident than by design. The image of Ram was installed inside, while the construction of Chaturbuj was taking place, designed for it.

For some reason, the image later, could not be moved from the palace and in spite of the towers and the decoration ended up becoming a sacred place.This palace has not so much ornamentation. It has a public hearing room and a private one. A lot of fame came from the paintings it has with religious motives.

Something that also surprised us, were the purpose of the two pools that are in both courtyards. It was nothing more or less than for the breeze in contact with the water to cool the rooms. The third palace, the Rai Praveen Mahal, has two floors, is built in brick in the gardens of Anand Mahal.

Once the visits in Orchha are over, only 17 km separate us from Jhansi that translated in time takes us about 45 minutes. Yes, the distances in India become eternal. 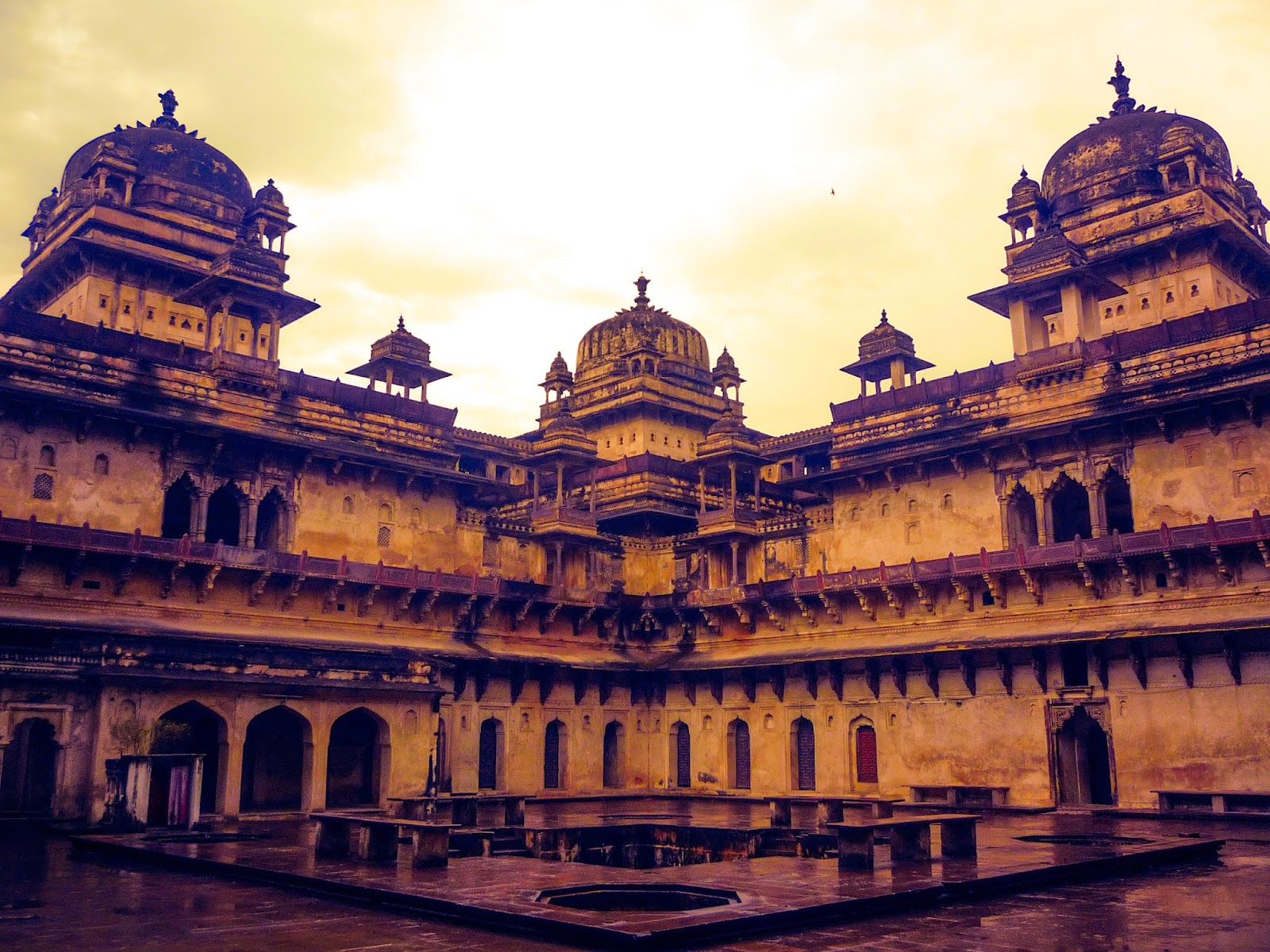