Perhaps no other country can offer the variety of cuisine that India can. There is nothing else like typical Indian food. From Kerala to Kolkata there is an all fabulous buffet of regional dishes to be discovered, beyond the familiar favorites of chicken tikka masala, rogan josh, malai kofta and tandoori butter naan which can often be more difficult to find in India than in the UK.

Rogan josh is an aromatic curry dish that comes from Kashmir and is very popular in Kashmir and Punjab and in other countries like Pakistan, Singapore, and the UK. Rogan means oil in Persian, while Josh means hot, or passionate. So, rogan josh has the meaning of cooking in oil over high heat.

It is a lamb curry chopped and cooked in ghee. Initially, it did not have garlic or onion, but the many versions of the Rogan Josh recipe include many ingredients and spices that become part of the dish. It may be accompanied by naan bread, rice or anything from mild flavor to neutralize a little of the fierce ardor.

Rogan josh dish was brought to India by the Mughals. The relentless heat that was in the plains of India made the Mughals often move to Kashmir, where people first adopted this dish.

Rogan Josh recipes vary greatly between different regions and traditions, even within the same region of Kashmir, but all include lamb or chicken, oil or ghee (clarified butter), and a mixture of spices. Within spices, paprika is included to get the red color, anise, cumin or cinnamon. Modern variations include ginger, garlic and yogurt, and even the use of the tomato. Although the original versions used saffron instead of yogurt to make a tasty sauce. 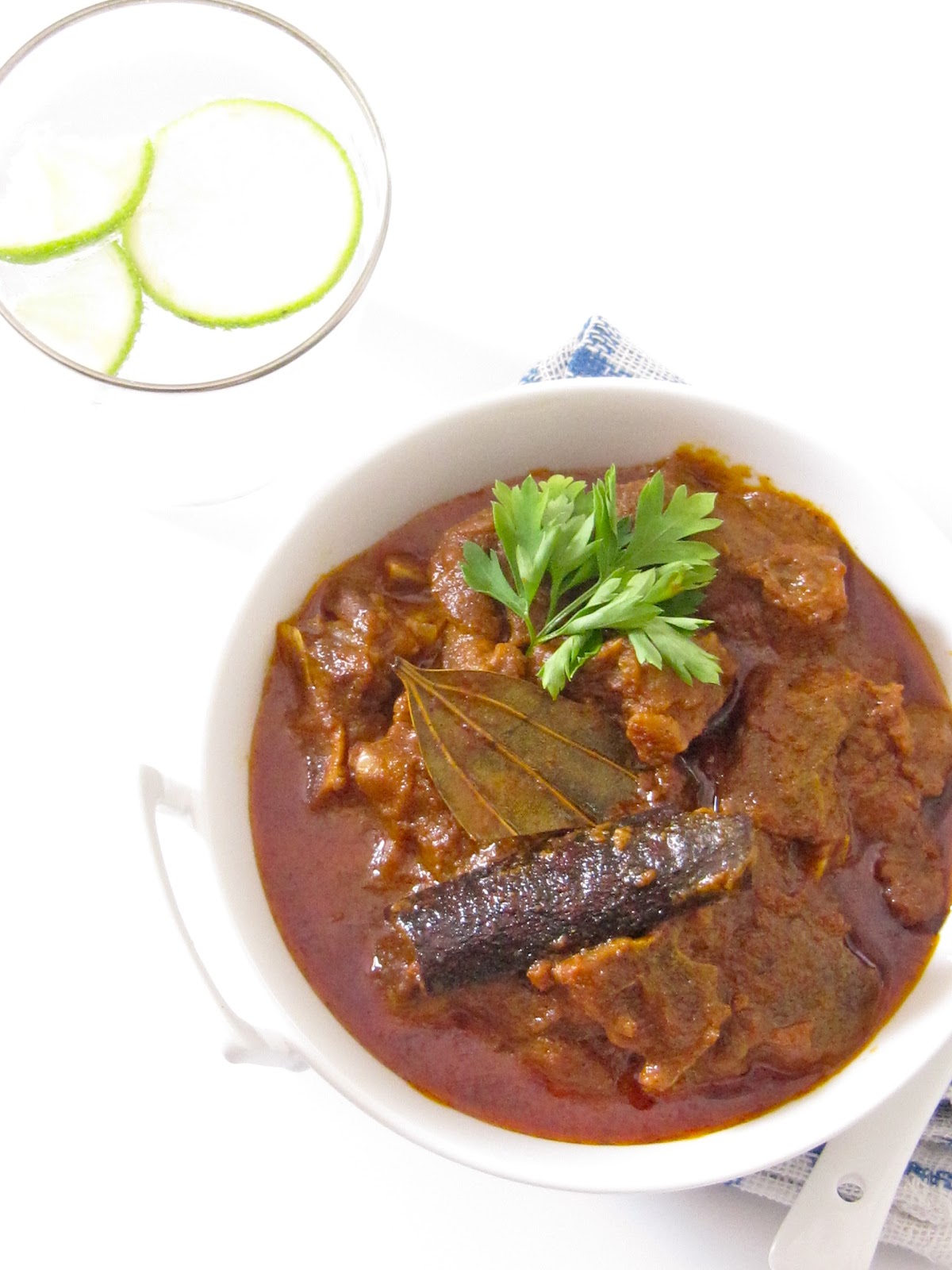 Rogan Josh is distinguished by its thick and tender red meat sauce. Rogan Josh is a common dish in northern India and is also a popular menu item in Indian restaurants in North America and Europe.

Whatever the true origin of the dish, its name provides a clue about the technique used in its preparation as well as their appearance. To prepare Rogan Josh, most chefs begin frying the choice meat - lamb or goat in butter known as ghee.

The meat is then removed and a series of spices - usually including garlic, ginger, pepper, cardamom, cloves, cinnamon, bay leaves, pepper, coriander, cumin and red pepper are added to the hot butter in stages. Thereafter, the meat is returned to the pan with plain yogurt. The pot is then covered and its contents are simmered for an hour and a half, or until the meat has become very tender.

A large number of variants exist. For example, some cooks add finely chopped tomatoes or tomato puree. Others include paprika in the spice mixture. These alter the taste of the dish and its red color intensifies.

Today, Rogan Josh is still popular in northern India. Its popularity in the Western world may be partly due to the fact that it is very good, but not intensely spicy.

Almost too dark and too oily for most palates, Rogan Josh is an aromatic mutton dish cooked in spicy gravy at intense moderate heat. It will be possibly the richest meat curry you will have in your life. Preparing the Rogan Josh needs good amount of patience and passion for cooking it on a slow flame. One bite and the taste burst into the mouth with whole lot of spices tingling into the taste buds making it a memorable delight to relish.

Rogan means oil, while Josh means heat, hot, boiling, or passionate. This Rogan Josh recipe doesn't need too many ingredients, just that, the longer you keep the mutton pieces marinated, the better. It includes grinding of the masala like the onion, garlic and ginger to a smooth paste and deep frying the mutton till it blends well in the masala which results in smooth gravy and luscious mutton pieces cooked to perfect with spices. It is one of the hot favorite mutton recipes and has a excellent taste with an treasured aroma.

Get ready for an absolutely delicious ethnic spicy fragrant curry. The rogan josh is a kind of Indian style lamb stew slightly more tasty than other curries, and have a milder taste and delicate. The Mutton Rogan Josh is an aromatic dish of Persian origin and is one of the featured recipes of Kashmiri cuisine.

One of the things about this Rogan Josh recipe is the fact that there are so many layered flavours. It is very different from one of those Rogan josh already made, you have to cook it for you to understand. Do it with the lamb, but you can also use chicken.

The cooking time will be the same even if you use another meat, just cut it into pieces of 2.5 cm anyway and let yourself become intoxicated by those intense and exotic flavours. Lamb Rogan Josh is an ideal dish for for every occasion in the company of friends or an evening for two with a good wine.

In a pressure cooker, add mutton, a cup water and cumin. Close cooker and cook till all the water evaporates. Keep aside.

Heat ghee in a pan over low heat. Add bay leaves, curry leaves, green chillies, cloves, cinnamon, poppy seeds, almonds, cardamoms, pepper, cloves, mace, nutmeg, sliced onions and fry for a minute till golden brown. Add the tomatoes and cook till oil starts separating. Add the vinegar and cooked meat to it and mix well. Stir fry it for some time till mutton turns brown. Add a cup water and close the pan and simmer on low heat till the meat is well cooked. Once cooked, add coriander powder, saffron, sugar, and mix well.