We take the bus to Udaipur. The city is buzzing as Diwali approaches. Yesterday Dhanteras was celebrated and tomorrow is Diwali, which everyone has been preparing for a week all over India. All the inhabitants clean, repaint the shop fronts and sidewalks in brown. And they draw white oil lamps, symbol of the festival of lights. We spend the afternoon at the edge of the artificial lake in the center of which is the lake palace where was shot Octopussy with Roger Moore.

The water level is low but enough to make it pretty. We walk along the edge of the water along the ghats. Women bathe there, while others do laundry. There are small temples all over the city, including the lake. At the end of a small street that smells bad, we see a beautiful view of the Lake Palace. I walk alone in the neighborhood. In the Gangaur Ghat is the Bagore Ki Haveli, at the edge of the water.

After renovation, it has been transformed into a museum. On the occasion of Diwali, mandalas in colored sands were made on the floor of the courtyards. Several of the rooms are visitable and retrace through the furniture and objects, the life of the haveli. I see a kitchen, bedroom, dresses, and board games. There are also costumes, headdresses and turbans and the biggest turban in the world.

I go back to the neighborhood of Lal Ghat and visit the Jagdish Mandir. This temple is dedicated to Vishnu and a black stone statue represents him. I reach by climbing a staircase at the top of which are large statues of elephants. Small temples are located in the corners of the square. A small sanctuary houses a copper statue of Garuda.

The main temple is decorated with sumptuous bas-reliefs of dragons, elephants, horses, dancers and even characters from the Kama Sutra in the corners. The craft shops are grouped by district. Among the specialties of Udaipur, there are very fine paintings called miniatures. It is in this neighborhood that we stay.

In the evening, I meet my friends on the terrace of our Guest House. We have a nice view of the lake but not the palace. We take a few steps outside, cross the pedestrian bridge where a charming restaurant welcome us. To console us we look at the good old James Bond movie, Octopussy during the meal. It must be at least 20 years that it is projected every night to the terraces of restaurants in the city.

We spend the morning visiting the City Palace. This imposing palace, adorned with balconies, towers and cupolas, overlooks the lake. At 244 m long, it is the largest palace in Rajasthan, but it was built in stages. Every maharaja added a piece. We enter through the Tripolia gate.

In the first yard, elephants used to play tug-of-war with their trunks. There are also constructions for the rest of elephants (sort of bed), and platforms to climb on their backs. The Mor Chowk contains mosaics of glasses and mirrors in relief, representing majestic peacocks. The Krishna Vilas contains a collection of miniatures. It has been planted real trees in a central garden (Bari Mahal) because it rests not on a lower floor, but directly on the hill.

The afternoon of Dhanteras looks very festive. We go in an autorickshaw to travel 3 km north of the city, to the craft village of Shilpgram. On the way we go along the second artificial lake of Fateh Sagar. It is partly dry, and is surrounded by hills. Shilpgram was created by the government, to show a glimpse of the craft and folklore of the country. There are reproductions of traditional houses of Rajasthan, Goa, and Gujarat.

There are performances of dance and music in costumes, a magician. But, maybe because of Diwali, the village is half empty, and it's disappointing. Back in Udaipur, I go alone in town shopping for Mojari, the leather slippers covered with pearls, with round or pointed ends. I head to the shoe-seller district. Seeing me look at my plan, a charming, elegant young man asks me what I'm looking for.

He offers me to get on his bike, and to accompany me. I accept his proposal. We go to some shops but I do not find my happiness. Either there is no size, or they are badly finished. The guy tells me he is an arts student and offers me to go to drink a chai. I naively imagine that it is in all good honor but I decline the offer anyway, because I'm a little suspicious.

I have an appointment at the boat landing to take a boat trip on Lake Pichola. The guy does not insist too much. He says he can escort me. I told him that I can continue on foot because I'm in a hurry. And there as not enchantment, his bike restarts. We left on a busy axis, but in the opposite direction of the lake.

I tell him we are not going to the right place. He invite me to drink tea, at home this time. I tell him that I do not want to miss the boat, and that the others are waiting for me and I'm the one with the tickets. If he does not want to take me right away, I'll manage without him.

Finally he accompanies me, continuing to ask me many questions, what I think of him, if I agree to see him after the boat. I tell him he's nice and that if he wants, he can join us for the meal. But I do not think that's what he expected and we will not see him again.

We embark in a boat and go around Lake Pichola at a pace, at the soft sound of the engine. I still appreciate the relative calm and the landscapes. I see the ghats, a new upscale resort, and tall grass. Then the sun goes down and sets on the hills. We walk around the illuminated Lake Palace, which occupies the Jagniwas island.

While on Jagmandir Island is a palace lined with elephant statues. With the dawn of the day, we see the flight of waterfowl, and huge bats. Our walk is coming to an end. We go along the last bank at the foot of the illuminated City Palace. In the shady shade, beside the landing stage, we can see a man in the water up to his chest. He is fishing with the net.

We drink lassi and go back to the hotel. Since the end of the afternoon, tourists from the terrace of the neighboring hotel start lighting firecrackers and fireworks. A procession of dancer, camel and elephant passes in the street. People go to the temples.

I prepare a pretty table with a lotus flower in a basin and terracotta oil lanterns. We install on the roof terrace of our Guest House, and order a delicious meal consisting of the best snacks and sweets. Around 8 pm, the entire city is set on fire by an explosion of fireworks that will last at least 4 hours without interruption. I had never seen so many at one time. It was a very nice evening.

The day before, the receptionist invited us to join them for a festive meal. It is with gratitude that we buy big fireworks, rum and we cross the bridge. We participate in the purchase of chicken. It's a family atmosphere, although there are only men. It is during the preparation and cooking of the Chicken Butter Masala that we light the fireworks and get to know the people better, with a drink in hand. When finally comes the time to eat, the chicken pieces melt in the mouth with the spicy sauce and subtle aromas. 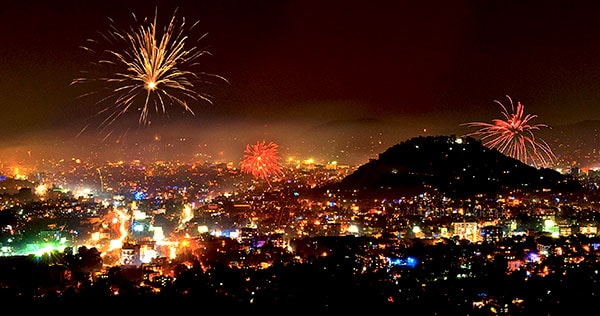 We rented a car to visit the surrounding countryside. The landscape is hilly. We see women carry jugs or hay on their heads. For Govardhan Puja, also known as Annakut, the cows have been painted, so we cross one with green, purple, striped or polka dots at the edge of the road. This is fun. The buffalo horns have not been spared. There are monkeys by the side of the road, and a peacock sneaks in front of the car.

After two hours drive, we arrive in the Aravalli Mountains. At 1100 m above sea level stands Kumbhalgarh Fort. It is the second most important fort of the Mewar after that of Chittor all in stone, surrounded by a huge 36 km long wall.

This served as a retreat for the Rajput rulers in times of danger. And unlike Chittor, which was taken three times, and then abandoned, the one from Kumbhalgarh fell only once for only two days. We began our visit by walking on the ramparts. Then we admired some of the ​​temples scattered around the compound. Some still have beautiful sculptures of elephants, horses, characters (gods and dancers).

Others in ruins look like a pile of stones. We even wonder at times if they were stacked in the right place during the renovation. Besides, the return to the fort was rather steep, in the scrub. We walked along a reservoir and climbed to the palace. The latter includes some paintings of elephants fighting against all kinds of animals like boar, crocodile, tiger. But it offers especially a beautiful view of the whole area.

After taking the car on a winding road, in a deep wooded valley, we arrive at the second site of the day at the Ranakpur temple. It is one of the largest and most beautiful Jain temple in the country. Brightly white, it has finely carved marble columns. Inside, its architecture gives an impression of harmony.

Depending on our position, the columns line up or shift. The ceilings are also carved. And some courses include a large elephant statue and a sacred tree. Soothed by so much beauty, it is serenely that we return to Udaipur. For the last meal in Udaipur and with our friends, we change to enjoy the view from the front roof, on the illuminated Lake Palace.

At the Guest House, after a good meal, we spend a nice evening in the terrace. Then I take a night bus to Jaipur.