It is 7 am and the night train that connects Delhi to Varanasi enters the destination station on time. Despite the comfort of the first class, I am still numb and sleepy. On the train, I meet a humanity that reveals itself in all the nuances of opulence and indigence, in a succession of images that overlap and break up. In Varanasi, the heat is oppressive. I make my way through the crowd and I can reach an old Ambassador.

The taxi driver, with the classic rocking of the head, smiles at me and leaves in the direction of the city. He is a bright-eyed young boy. He tells me that his business, like the old car, is handed down from his father. While he tells me about the origin of the city and the cult of Shiva, I am hypnotized by the statuette of the god in question resting on the dashboard.

It was in Benares that we landed at the heart of this incredible celebration of the goddess Durga. During our stay, the dialectics of joy and sorrow, dance, and sadness, birth and death came to our minds. The national spectacle of Durga Puja took place at the same time.

It was my first day here. We had just dropped our bags in our Guest House. It was seven o'clock when we leave our Guest House for our first round in the streets of Varanasi.

We were lucky enough to be in the city during the Durga Puja festival. Here insane crowds clog the illuminated streets to worship the goddess. There was loud music coming from pandals of the goddess Durga and her entourage. The festival goes on all night. In addition to deafening music and aggressively quaint street parades, magnificent Durga statues are adorned.

We maneuver through the crowds, dogs, cows, and puddles of unknown origin back to our guesthouse. In short, it is a ten-day festival in honor of the goddess Durga. The social value is comparable to a carnival but without the familiar contemplation. and then sunk in the Ganges. 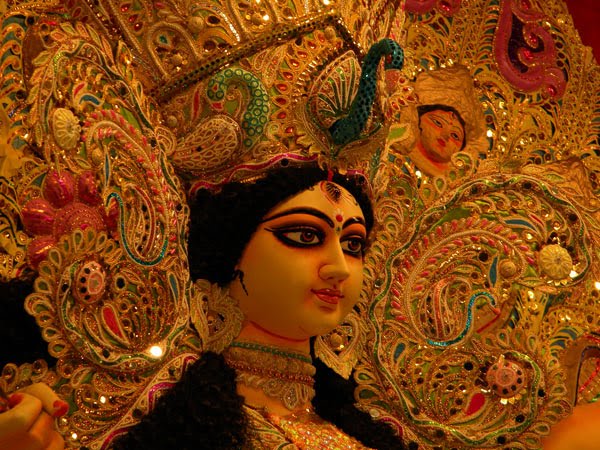 On the next day too, we heard music in the distance, followed by the children who were going in the same direction! We came face to face with giant deities, carried by a boiling crowd. There are smells of incense, and explosions of firecrackers. Men and women dance as music play everywhere.

The trucks and the crowd went on in a crazy choreography. Loudspeakers play music at full volume as the crowd cheers the Goddess with songs, applause, shouts of joy. It was difficult to advance in this colorful crowd. They were in trance and the streets were crowded. We again made our way through the trucks, tanks, and cows that share the streets.

The ceremony continued on the banks of the Ganges. Ganesh, Lakshmi, Durga and all the other statues are lined up in front of the crowd gathered on the steps of Ghat. The deities were then embarked and plunged into the sacred waters.

We watched the colossal statues float and flow, followed by candles, incense or smoking sandalwood. It was an unforgettable experience at the heart of Indian fervor.

Going down the steps and arriving on the bank of the Ganges makes me feel a sense of liberation, but I leave a city to find another. I descend towards the river and with gestures, I can make myself understood by a boatman. I get on his boat and, as I move away from the shore, everything becomes more suffused, almost blurred. Flowers and votive lamps float on the water, and the atmosphere becomes unreal.

In all this vortex of emotions, there is an inexplicable harmony. Never, anywhere, we have felt such a profound sense of communion, of tranquility and, almost, of joy.