In addition to a party very happily special gifts are made. Let us know more about the delicious foods that are cooked on the occasion of Holi and twice the joy of the celebrations. Each festival in India has its own special delicacy, which is Gujia in Holi's case. Gujia is a kind of dumpling that is filled with a mixture of nuts, sugar, coconut, and Khoa (dried whole milk).

Although, Gujia has its special meaning on Holi's occasion, but there are many other edibles that are made especially for Holi. Matharis, which are made from wheat flour, salt and baking powder are also offered this holiday.

Gujiya is also known by Karanji, Karjikai, Kadubu, Kajjikayalu or even Pirikiya. They all look the same, but they get made in different styles with different fillings. Karanji seems to be a native of Maharashtra even if it gets spread across India by different names. Do not expect anything sweet like western candy, this is totally different. Karanji is a common sweet, but there are often stalls selling whole Indian sweets only, in all kinds of colors and shapes. 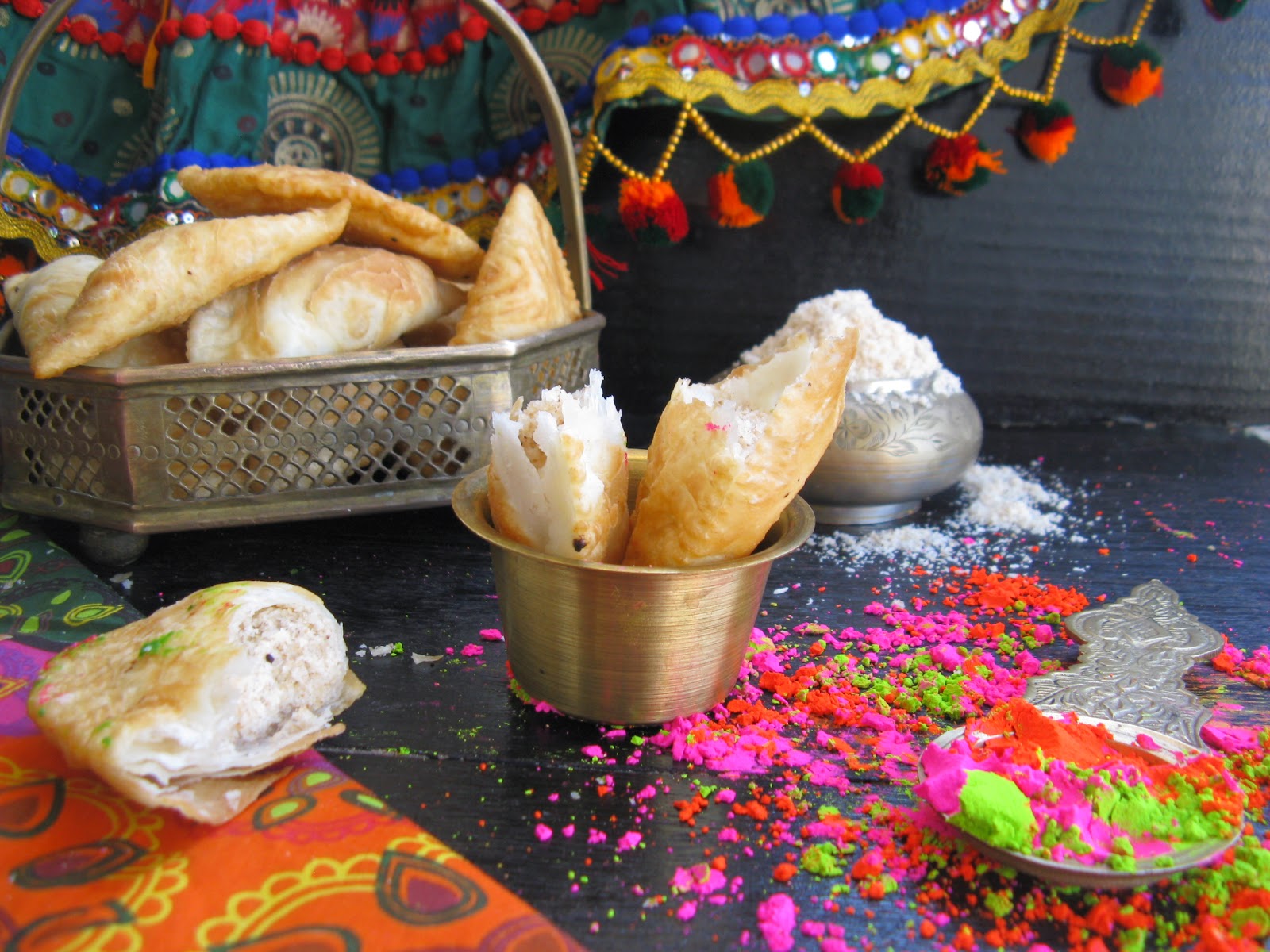 When people visit in Holi, these delights are offered as a celebration of fraternity and love. Now, you're prepared with the tasty food, so what are you waiting for?

Public squares, parks and gardens and neighborhood patios, alleys and family houses, any place is worth to celebrate, any place is appropriate to share music, costumes, food and drinks such as gujiya, mathri, malpuas or other delicacies that They also have their chapter in the Holi.

Powders and waters of colors that come and go, dances, songs, voices and music that compete to win the rhythms of the public, and purifying fires and joys that fill everything. This is one of the most international Hindu festivals.

They call it Holi, Holi Festival, but there are also those who refer to it as the Festival of Colors. It is a sweet, very sweet entry from the Hindus in the spring. But it is also something bigger, more human, more sincere, a time in which to laugh, in which to play as children. It is a time in which to meet friends and family and gain humanity by forgetting, forgiving and doing everything to recover broken relationships. For that, and for everything you can imagine, Holi is also called the Festival of Love. Celebrate Holi, the festival of love and friendship with beautiful colors and delicious delicacies.

Gujia is a very common Indian sweet dessert that is prepared during the festivals, especially for Diwali and Holi, both with savory fillings of minced meat, vegetables and spices or with sweet fillings made from coconut and dry fruits.

Gujiya is also known by Karanji, Karjikai, Kadubu, Kajjikayalu or even Pirikiya. They all look the same, but they are made in different styles with different fillings. Karanji seems to be a native of Maharashtra even if it is spread across India by different names.

For the filling, it is stuffed traditionally with ingredients like the dried coconut, dry fruits and cardamom, but there are several versions. You can chose the Mawa, also known as Khoya, that can be prepared at home with milk cooked slowly. But if you do not have a lot of patience you can get the Mawa in an Indian store.

There is little definite information about its birth and the culture that gave birth and is widespread in several countries such as Germany, China, Japan and Thailand. Traces are found even in the nomadic cuisine of Mongolia.

In a mixing bowl combine the flour, salt and a tbsp ghee. Gradually add water and knead to form firm dough. Cover with a wet cloth and leave aside.

Divide the dough into small sections, roll them out into flat round pancakes. Place a spoon of thickened milk mixture at the centre and fold the pancake in half. Use a cutter to create the fluted crescent border and cut off excess dough. You can seal the edges by applying a little milk and pressing down hard.

On slow fire, heat ghee in a pan and deep-fry both sides till golden brown. Take out using a sieve and drain the oil properly by removing onto paper towels and allow it to cool.