The watermelon is widespread and is eaten not only naturally, but also as a juice. Watermelon juice is a fruit rich in water and it is for this that is particularly suited to those who follow weight loss diets. The carotenoid substances contained in this food make anticancer and antioxidant. The watermelon sorbet is a fresh and original way to consume watermelon, fruit typical of the summer season. The preparation of watermelon sorbet is really simple, serve a few simple ingredients to create a fresh sorbet can be served as a dessert after a meal or as a snack, because it contains all the benefits of the fruit in fewer calories.

Probably of African origin according to some instead by Asia in ancient Persia, in the fifth century BC the Egyptian people began to export in the Mediterranean and arrived in Italy in the Christian era, as documented by Pliny first century AD in his book Naturalis Historia that it conformed to the cucumber shaped quince, melopepaes.

During the Roman Empire melon spread quickly but used as vegetables, served in salad so that at the time of the Emperor Diocletian , was issued a special edict to tax those specimens with melon which exceed the weight of 200 grams. Alexandre Dumas wrote, to make the melon digestible, you have to eat it with pepper and salt, and drink over half a glass of Madeira , or better than Marsala; he appreciated the melons known in France as Cavaillon, for the production area, and made ​​request to the library of the city of one exchange between his works (400 volumes) and an annuity of 12 melons per year, which happened to his death in 1870.

It was in his honor that was established the brotherhood of the Knights of the melons of Cavaillon. Watermelon was once considered a symbol of fertility, perhaps because of the large number of seeds, and also associated with the concept of silly and clumsy it was called a fool melon and a nonsense mellonaggine. According to Angelo De Gubernatis, the reason for this association is to be found in the extreme fertility of these fruits, their generating capacity, uncontrolled, as opposed to the reason of intelligence.

Others doctors at the time they were considered harmful and melon imputed to the death of well Four Emperors and two popes. Even the Roman naturalist During Castor (1529 - 1590) in his new Herbario of 1585 warned not to abuse it because diminish the seed of copulation and did not recommend the use in diabetics, dyspeptic and all those who suffer from disorders of digestive system, promoting all the other virtues instead refreshing, diuretic and laxative. 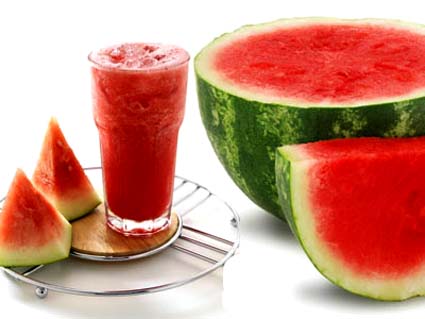 Combine watermelon, ice, honey, and black pepper in a blender. Blend until smooth.

Pour the mixture in a glass. Garnish with mint. Serve chilled.