Puri in the state of Orissa is one of the holy cities in India since there is the famous Jagannath Temple. Every year at the Jagannath temple, the Rath Yatra is celebrated. The temple was known since ancient times as the White Pagoda. It served as a reference point for those who sailed in the Bay of Bengal as opposed to the Black Pagoda, visible at Konark, about 40 kilometers away from Puri.

Jagannath Rath Yatra is one of the oldest festivals in India and in the world. Literally, it is the journey on chariots. Yatra means journey while the chariots in the Odia language are called Roth or deula.

After a ten-hour trip, I was in Puri, a small city on the banks of the Bay of Bengal. We find the hotel, checked in and paid the rickshaw that brought us. The hotel is very close to the beach and is not bad, counting what it is worth and what we have seen. Around afternoon we go out to see the area and have a lunch of rice and fish curry and a grilled fish.

We walk around the main street and we learn that in Puri, the bhang and opium are legal and the stores that sell it are the government ones. The beach is very dirty and full of oils from the engines of the fishing boats that are in its sands. The girls bathe in T-shirts in the area that we are, even the men.

It is full of locals, although to tell the truth, it is nothing compared to Goa. The beach is similar to Mamallapuram in that of the boats and fishermen with the arts in the sand, but the waves are nonexistent. With everything, they already warn us about the hangover and the currents. The water is a little cooler.

After coming back in the evening I take a shower and with the laundry done, we go to the internet cafe. We had dinner at night on the main street with noodles, prawns, and rice and watered down with a beer. We get back to the hotel to sort the bed and rest. 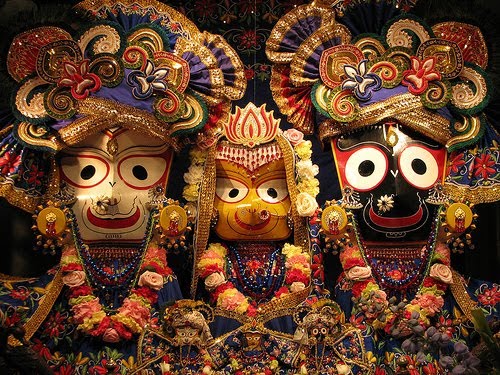 We rise early and see the Puri beach still immersed in the darkness of the night. The swarm of thousands of pilgrims awaiting the dawn is attenuated by the roar of the ocean waves. In the distance, a beam of yellow light makes it possible to guess the crowds of devotees and the shapes of those who have already begun to prostrate themselves and pray.

We have breakfast at the hotel with a toast with butter and jam, egg sandwich, coffee, and Maaza. After breakfast, we left for the main temple, the Jagannath Mandir. We go down the beach avenue. The heat is terrible, but the humidity is even worse. At the end of the beach, we take a picture with a beach watchman, a very nice lifeguard who gives a smile. In his pointed woven palm hat, painted white, we read "Life Guard".

We reach the center of the large square from where the procession leaves. It is occupied almost entirely by the largest of the three chariots, that of Jagannath. We see the temple and the procession from an adjoining terrace. In this case, it was the terrace of an old but charming bookshop next door. For a donation, we must leave the name and amount donated, which points in a book kept under lock.

The bookseller shows us the entrance to a wooden staircase that leads to a terrace on the top floor, from where the followers of the god do their work. The bookstore is very beautiful. It is old but charming. It has some shelves full of dusty books, four tables and some windows with glass in a vivid green, which give a little light.

They say that the kitchen of the temple is the largest in the world. Its 400 chefs feed more than 600,000 men, who are the ones who look after the temple and take care of the liturgies and rituals that Jagannath requires. The temple of Jagannath Mandir is dedicated to Jagannath, a black god with big white eyes, venerated throughout Orissa.

This God widely worshiped in Orissa, has an outward appearance that is absolutely far from the classical canons of Indian mythology. Contrary to all his colleagues, rich in arms and hands and eyes contorting their bodies throughout the baroque religious iconography, our Lord is always depicted with a squat. He has a pointed trunk, with no arms or legs, painted black and other bright colors with huge round eyes that look at the devotees like a Japanese manga.

He is accompanied by his brother Balarama but colored in white and by his sister Subhadra, represented by a small statue of the same appearance but with the arms, placed between the two brothers. The triad fixes the faithful with eyes enchanted by the altars of many Orissan temples. But it is in Puri that the collective devotion is unleashed, especially during the Ratha Yatra.

The rituals start with the opening of the lock for the opening of the door at five o'clock in the morning. The three statuettes, placed on gigantic carts over ten meters high, are carried in procession along the three kilometers of the sacred road to the temple that is at the end of the street.

The three main deities, among musical sounds, in a very festive atmosphere, are transported to the river on decorated carts. The carts tied with ropes are pulled by the devotees to the Gundicha temple which is 2 kilometers away.

The temple, one of the most visited in India, is crowned with a flag and the wheel. By the way, a few weeks back in Bhubaneswar we saw how some craftsmen made the wheels for the next Ratha Yatra. They were huge. The floats are newly done every year. Every year new wagons are built with wood from a particular tree.

Sadhus and pilgrims mingle with vendors, some tourists. There is, in addition, the workers who clean the road a bit. The road is full of water, liquids and all kinds of junk, papers, plastics, branches, leaves, and offerings of coconut, banana, flower bouquets, and rice.

We mingled with the thousands of people that ran along the sacred road. We went to the sea, not far away, where the strong waves broke with a dull noise on the shoreline. A heavy smell of incense and of ghee pervaded the streets. We take a rickshaw back to the hotel. We have walked a good time today. In the afternoon we are already at the hotel and we take a shower.

After a quick shower, we go down to eat at a small hotel with rice, dal and vegetable curry and papad. We go back to the hotel, and later we went out to do some shopping. We return to the hotel and prepare to hang around this evening on the beach.