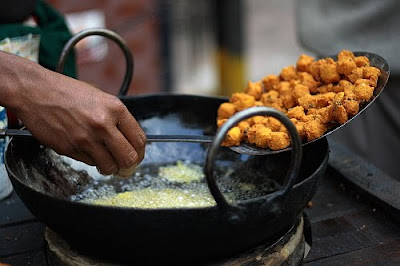 Kolkata may have its sophisticated restaurants and food plazas but many of its residents are still devoted to her street food especially the mobile stalls that gather around the gates of schools when the school gets over. Many of the school goers remain so hooked to them that not even the guardians, but sometimes they themselves has a suspicion that whether these things are drugged or not.

A path that leads the viewer through the knowledge of a part of the boundless Indian cuisine, perhaps the most street, certainly the most eventful and colors of part of the East always mysterious and fascinating evenings which add to the expressive power of the documentary odors and fragrances of freshly cooked food in an old and very quaint equipped van.

On this list, supreme importance can be claimed by Fuchka (panipuri). Small puffed crisp wheat balls stuffed with a mixture of boiled potato, boiled gram and roasted spices and filled with sour water of tamarind, fuchka has its origins in Benaras, where pudina and roasted red chili powder is a special addition.

One can find other varieties of fuchka like dahi-fuchka or alur dom fuchka with yogurt and smashed potatoes, served in sal pata(dry tree leaf) bowl or the leaf itself shaped in a cone. Even after that the taste from one phuchka wala(vendor) to other varies for the mixture in spices and obviously the mixing. With fuchka comes churmur. It is a mixture of potato slices, gram and crushed fuchkas with spices and tamarind water sometimes with a pinch of coriander or lime over it.

Another item can be found from these people are aloo-kabli. It has the same ingredients that of churmur with an addition of raw onion less than the crushed Phuchkas. Most tasty you will find these items when licking the residue in the sal leaf. Next in the queue comes telebhaja (oil fried snacks). Though every fried item is obviously fried in oil no one knew why only this variety is called so.

Generally, the softened varieties are Maharashtrian in origin with sauces and potato or cucumber slices and the ones with more crunchy items and are termed bhel puris or batata puris.

In Kolkata, the inviting dining corners were organized to present different national flavors in one place, to connect people and bring together different cultures and ethnicities. The love for Indian street food is very old since there are many cities that bear the names of dishes and popular combinations.

According to FAO studies in the city of Kolkata, an average of one thousand calories from street food contains about: thirty grams of protein, fifteen grams of fat and one hundred and eighty grams of carbohydrates. This probably makes the street food means less expensive to get a nutritionally balanced meal outside the home, at a minimum price.

The prepared food and beverages are prepared and sold by street vendors, that cater to a huge chunk of the Indian population regardless of economic status. While the poor take this food to eat, the middle class or rich he does for his taste.

There is not one formula for its preparation and here lies the secret of taste. Chowmein (mixed noodles) is another favorite which was introduced by the Chinese in Kolkata.

The singara or the samosa is made of a vegetarian filling over a flour based covering, deep fried. The filling can be simply mashed potatoes or may contain any vegetable including, famously, fresh cauliflower. During the Bengal winter, the smell of cauliflower Singara, being fried fills the air. There are so many stories about the several Mughlai eateries along with modestly priced biryani, roll, tikka and cult-status kababs (small boneless chicken cubes roasted in tandoor).

Roll is a type of Indian bread stuffed with stir-fry. In this way, you can actually find small old shops that sell paranthas for generations and boasts a clientele of famous Indian politicians and celebrities who flock there often, in addition to the daily visits of ordinary people. But in their popularity chart there are behind no one and everyone hopes even the extinct ones to reincarnate in near future.

Kolkata biryani evolved from the Lucknow style. The use of potatoes has become a distinct feature of the Kolkata biryani as an additional ingredient along with the meat. In addition, the biryani is much lighter on spices and more subtle.

Among sweet delicacies most prominent item is the malai borof or kulfi(ice-cream). The item is found still on the roadside vendors in an earthen pot inside which the molds are kept, a substitution of the freezer. Many of these vendors also sell flavored colored water.

The daily food through the street food of millions of people in the country provides a regular source of income for millions of men and women who would otherwise be unemployed. There are large and small food businesses in many Indian cities that have their origin linked to the humble eateries in the street.

The recipes of Kolkata street food are not popular only in the country but have had the same success in the rest of the world, presenting the immense diversity of the country as a delicacy to be savored.

The first thing that strikes you is the myriad of vendors present in the street, it seems that everyone has to Calcutta own business. There are barbers, shoeshine, booksellers, but especially banquets with every type of food. They range from the simple Luchi (a kind of fried bread) to more elaborate dishes, such as the Kati rolls or others whose name escapes me yet. Kolkata is famous for its street food.

A long layover in Calcutta, the city where he remains haunted by the culture of food, by the way used for cooking, from the colors of the dishes and the many smells that emanate from the pots along the crowded streets of the city with delicate and panoramic foods that cook in pots, bringing out, in addition to food, the gestures of the cooks of the road and the patrons.