We arrived at the Mumbai airport and we took a prepaid taxi. In the city traffic was as chaotic as we feared. Apart from that the sacred cows sit on the roads! Our hotel is in the center of the city but away from the tourist area. On the outside, it's a bit scary, as it's on the first floor of a commercial zone of electronic music material.

It has no common areas and only one corridor with the reception. Of course, it has the best price for the area. After a shower we go to the street to enjoy Bombay. The first thing that strikes us is the amount of traffic and temperature. It is very humid and it is very difficult to get from one sidewalk to another. The cars do not stop.

We decided to sit in a shabby bar, the only one we found with tables in the area. The place is not very clean but it has a certain decadent charm that has not had a coat of paint in the last 50 years. People look at us a little surprised and we interpret that many tourists do not come in the area.

After getting acquainted with the Lonely Planet map of the area we go to Marina Drive and Girgaum Chowpatty what could be a promenade. The walk is nice if it were not for the scorching sun and the temperature and surprisingly there is no terrace where we can have a drink. After more than an hour walking we arrived at the tourist area but before we started we took something in a kind of pastry shop in front of the Eros cinema.

Our tour starts at the Eros cinema, an art-deco building where they show Bollywood films. We follow up Oval Maidan, a large park from where we see the Rajabai Clock Tower, the University of Bombay and the High Court. We follow the route to the City Hall and Horniman Circle. We visited the Flora Fountain and ended up at the Gateway of India and the Taj Hotel.

As luck would have it, my visit to Mumbai coincided with Ganesh Chaturthi, the most important festival of the year! In the streets were huge, colorful pandals decorated with flowers especially for the occasion, much like Durga Puja. I see idols made of papier-mache by the local residents and exhibited in temporary shrines to pay homage to Ganesha. He is especially entitled to modak, and I have not had the opportunity to taste it.

Of all the pandals in the city, Lalbaugcha Raja is one that is especially famous and busy. In order to manage this number of devotees, the organizers of Lalbaugcha Raja create two different tails. Through one people can touch the feet of Ganesha idol, and through the other one can just see the idol of Ganesha.

In both cases the rows are long, but the first is longer. It is assumed that touching the idol and making a direct offering is more effective in achieving fulfillment of desires. From this perspective zenith, and also with some comfort, I watched the human tide pushing and struggling to get to the idol. It gave me ambivalent feelings.

On one hand, one can praise the devotion and faith of these people. They are willing to wait for hours to barely observe the idol for less than 1 minute but give their coconut offering to an assistant who picks them up in a box without ever touching the feet of Gaṇesha. The statue of Lalbaugcha Raja from its origin is prepared by the same family of sculptors.

The fact that the idol is new continues to influence my perception that the massive visit to the Lalbaug market is more than a spiritual event. I only count my impressions, which is no doubt dyed by the heat and the roar of Mumbai, but without forgetting that for years I have been a faithful devotee of Ganesha. Hundreds of thousands of people line up to reach Lalbaugcha Raja during Ganesh Chaturthi.

Some devotees throw flowers from a distance. Others simply deposit their offerings in a kind of lateral section that is filled with bags. Others give up heavier objects to volunteers, that goes from hand to hand until it is closer to the deity. Many parents go with their young children including babies. I saw the case of a mother who passed her 6-month-old baby to a volunteer.

As you can see, my feeling was not particularly inspiring, although my Ganesh Chaturthi experience was complete. Devotion has many facets and religion as well. Spirituality, in essence, is beyond all these rituals although for some people they are necessary and useful. It is said that there are two points of view. In India, that is true and also falls short. The points of views are infinite.

We return to the hotel. We dined at the hotel and the terrace is full of people. We are very happy with the choice of the hotel. 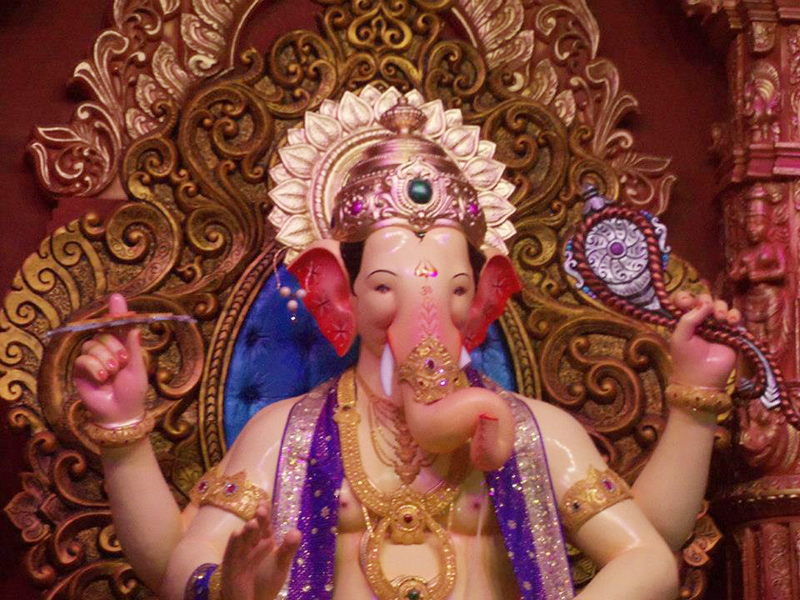 We have slept quite well, although it has been very hot. At 4:00 am, well before sunrise, we left as only in the morning until 6 in Mumbai one can see its authentic markets. We decided to go walking. Despite being early it is very hot and we sweat a lot. Our first stop was the fish harbor. Here men discussed loudly with the captains of colorful wooden boats on the daily updated price of fish.

The women were dressed in colorful saris and meanwhile took their seats in huge plastic bowls. This, so told us our guide, is the opportunity to talk with other women about everyday life and often gossip about the mother in law. After the men had agreed, the fish were thrown into the 4-meter-high dock in oversized baskets with a powerful but precise swing, and without anything falling apart.

At a signal, the women came rushing with their large containers and picked up the fish for sale at their market stall. The ride continued to the newspaper market, which closes at 5.30. Meanwhile, some tiredness came to me and I dreamed of a nice coffee. But when I got out of the car, I was wide awake again from the noise and the hustle and bustle on the roadside.

Opposite the new Chhatrapati Shivaji Terminus station, at the gates of some newspaper publishers, was the hub of over 200 international newspapers. At a length of 100 meters, these were loudly offered and sold. In between, I see a tea seller with hot chai in tiny cups, which I refused despite the great aroma. Laced up in huge piles, the newspaper packages were transported by truck, upside down or on completely overloaded rickshaws.

At 6 o'clock we were already in the flower market of Mumbai. The sun rose slowly and everywhere it smelled! I plunged into a jumble of market stalls with smiling children, who were happy for the school holidays due to ganesh chaturthi. Huge baskets of mountains of rose petals, white jasmine flowers and orange marigold blossom surrounded me. Even water lilies tied to bouquets were offered.

I let myself drift through the small streets and would have liked to buy at all stalls. Afterwards we drove to our last stop. In a labyrinth of alleys, which hardly open up without a guide, we find the spice and fruit market. Here, the betel-nut salesman, gleefully chewing on that nut, patiently told me about his business with the leaves and the associated paste.

The red juice should prevent fatigue and a nut has supposedly the same hi-awake effect as 3 cups of coffee. At 8:00 am I was back at my hotel, looking forward to a refreshing shower and a breakfast with a big cup of latte. We left the hotel to visit the Haj Ali Mosque.

The mosque is located in the middle of the sea and contains the remains of the Muslim saint Pir Haji Ali Shah. He died in Mecca but his body miraculously returned to Bombay. There is a footbridge less than a km that goes into the Arabian Sea. It might seem idyllic but it is not as the road is dirty and a smell of sewage and rotten fish invades everything.

The mosque, at the end of the route, is simple and the only thing that is worthwhile is the grave. We liked the general view from the shore more than the view in situ. From there we go to the nearby Mahalaxmi temple. The temple itself is not beautiful, architecturally speaking, but it is worth staying a while to see how believers pray and offer flowers.

It strikes us that once the offerings are offered a priest gives something to the believers. We try to visit a Parsi temple, but they do not let in those who are not of their religion. Being sweating, it is very important to hydrate and we continue walking to the Mahalaxmi Dhobi Ghat. We take the train to Churchgate. It's easy and comfortable.

Leaving the Victoria Terminus on the right, after walking a few meters, we can see the area of Crawford market. It is a visual spectacle and sound show that is worth even a short time. They sell everything imaginable and of the things that strike us most are the perfume shops and the nut shops.

After a break at a cafe we continue towards Khotachiwadi, an old Christian neighborhood with signs in Portuguese. The houses are made of wood and the deafening noise of the city is silenced. It took us a while to find it. We are going to see the sunset on the beach. It is full of people having fun.

Hungry amidst a sweltering heat (29 degrees with a sensation of 39 degrees according to the iphone) we go to the restaurant. We take fried cheese with a sauce with lots of garlic and cilantro and Parsi Egg Akoori. At the exit we get lost and we have to take a taxi to return to the hotel. We went out to find a place to have a drink and we did not find anything that we like and that meets our expectations.

We enjoy a procession of Ganesh visarjan where young people dance like possessed to the rhythm of drums. The area is full of locals and there is almost no one from abroad. All the people were happy, who laughed, looked forward and danced with the music. There was a special magic in the air. In the evening, several thousand inhabitants gathered at the sea. Some of the statues were carried to the sea, accompanied by small or large bands.

From my hotel room I had a magnificent view of the many groups who strolled to the ceremony in the next beach bay. It was a folk festival atmosphere and everywhere there were candy and food stalls. Tired I go to bed.