Calcutta is a disordered and chaotic city. The most striking thing is its sound. The streets are invaded by cackling cars that run, touch, the drivers are screaming and continue to press the hand on the horn. But to the Kolkata book fair, there is no other sign to give to a taxi driver in Calcutta to arrive without any loss. It is the most important event in the city, the largest book fair in India. Calcutta is still the cultural axis of this country.

Here, literature is more powerful than religion. The only two issues that can be equaled are the debates about the two football teams in the city, and which singer best sings the songs of Rabindranath Tagore. And while Bengal has the religious week of Durga Puja, that starts the period of festivals, it also has the literary week. It is the Book Fair.

Both attract people from all over the state, including emigrant Bengalis, who come to the city with the same fervor, to celebrate. Because the book fair, here, is not a mere exhibition of the bestseller that nobody buys. It is an excuse to walk an afternoon somewhere else than usual, or a sudden surprise that happens to the passers-by who do not look at the section of the agenda of the day of the newspaper.

The Book Fair causes excitement. Bengalis cross out the days on their calendars, from the beginning of January, until the exact days of their duration are announced. Then people plan on which day they will go, which booths will be visited. People find out which is the guest country, which books could be bought and even if they will sell some of their books.

Already on the outskirts of the fair, there are the tingling of people, the smells of stagnant waters, of street food stalls, of book sales. There are Tagore stamps with Ganesh, Kali, or some other deity of the Indian pantheon or even some phosphorescent Christ.

They mix from the first moment with the traditional or modern Bengali music and the incessant claims that arise from the megaphones of the fairgrounds. The number of people entering and leaving in hordes recalls the frenetic traffic of its streets. The noise too.

At the entrance, there are metal detectors and security guards who let everyone in, without paying attention to the wave of people who crowd to pass through the narrow detectors, which do not stop whistling. The first impact of the booths and of the open and closed pavilions is visual. Everything comes and goes through the eyes. The colors of the posters stuck on the walls evoke a feeling of shops on sale.

It is a kind of tourism fair. This impression is accentuated when discovering that within some of them there are musical groups performing live. After a short walk, and near the stand of the official guest country, we discover that in addition to the books in Bengali and English, others also have a presence. There are books translated into Bengali, from an anthology of the horror story to jokes or stories related to football.

While drinking the chai, we see a fair of publishers, authors, and the public. The world of bookshops affects much less since they are massively represented all year round in another point of the city, College Street, a gigantic slope of the Moyano.

The most demanded books are those of psychology, technology, school books and, without doubt, children and religious. On the themes of the novels, that the most successful ones are those that speak of the world of today. Love does not fail either. Possibly because of the influence of Tagore, there is a lot of poets per square meter in Bengal.

But not all are books at the Book Fair. One of the most important sections, which brings more sales, is the little magazines. These are small magazines in which lesser-known writers and painters publish, most of the time out of pure love of art. The little magazines are where the creativity and passion of the Bengalis beat for the literature and the painting.

It is not only on the cover but in the interior pages. Rare is a magazine without drawings, photographs or designs of some kind. Here the crowd is mostly made up of very young people. The row in front of the pavilions stretches like a colorful snake three hundred meters from the entrance. They wait patiently, curious, to enter the courtyard where they talk about literature and drink good coffee, taking behind a bag of crispy roasted and salted chickpeas. 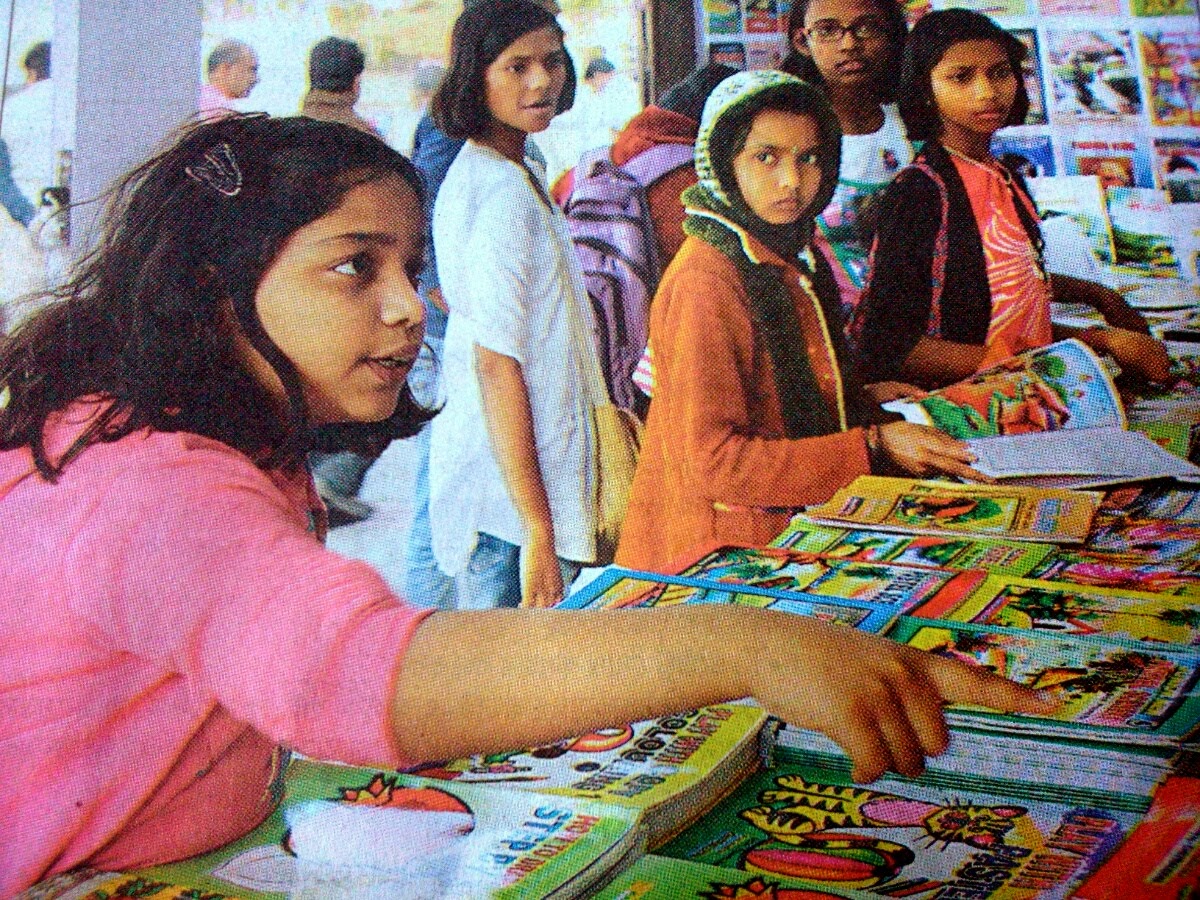 The timeless beauty is not just something that never fades. It is a beauty that is propagated and updated with the passage of time, which always find new forms of expression. It is linked to people, to ideas, to thoughts and technological resources of each era. This is the beauty of the Kolkata Book Fair, which is a creative universe that cannot be confined to a historical period, geographical area, a single museum or artistic discipline.

In the Kolkata book fair, the beauty is told in its evolution, in its relationship with the present and the future, and in its motivation to drive us to search for new horizons of creativity and innovation. The authors remind us that beauty can live anywhere and anytime, whether in a verse of the poet or in the incredible adventures or in the plot of a novel.

The fair presents us everything from paintings to illustrations, from the children's book to historical adventures, and from design to the beauty of science. In total there are about 570 booths from different publishers and countries. According to Wikipedia, about two million people visit the fair every year. If we compare it with the attendance to political rallies in the most recent history of Calcutta, even in the year of elections, the Book Fair wins.

While for those who live in Calcutta, it becomes a place of meeting and enjoyment, they surely wait to find the book in College Street, where they will get a greater discount. Those who buy more are those from outside Calcutta, for whom the fair is the opportunity to buy books that in their respective cities or towns would be impossible to find.