Upon leaving Transylvania during our trip in Romania we visited the few remains of the past splendor of Alba. We enter the hotel to see if we can have a drink and rest before dinner. We do not have any problem wandering around salons and corridors, but when we get to the bar we find it empty and badly lit. The truth is that it is almost scary, because it is a kind of medieval stone hall, with authentic armor and skins from animals everywhere.

We decided to leave immediately, and it's a shame because the hotel is set up in luxury. All we see are rooms and sumptuous gardens that do not lack detail. The only problem is that it looks like an enchanted palace. We do not see a soul outside the reception or in the outer doors. We finally found something open. It is not far from the main gate of the citadel. It is a tea room decorated in the same Viennese style.

The manager is a Romanian gypsy. He's a funny guy and he makes us laugh for a while until we get up to go to dinner. It is a kind of large winery fitted between the brick walls of the enclosure and is announced, which does not surprise us much, as a medieval restaurant. The kitchen is not exactly medieval. It is rather vulgar compared to what we have tried in other cities, but we appreciate the historical value of the place.

Our train to Suceava should pass around 11pm, so we did not take long to go to the pub where they keep our stuffed suitcases. This place is called La Poarta and at the moment it is full of young people but so full that we cannot enter or advance through it without using our elbows at every step. It's a shame because we would have loved to have a quiet drink, but we opted to ask for a taxi and leave.

In the station, a bar is still open, but nothing to do, the atmosphere is thick. It looks like a lupanar, so we did not even enter. We sit down to wait in one of the big benches in the room. There and also on the platform swarm more than one and more than two elements with a winnowing face. The worst thing is that we fear that the train arrives late and makes us wait until the many. But no, precisely today is timely. We went up with relief to the carriage in which we have reserved two double cabins.

The train leaves us at the Suceava station around 8:30 am. Before there is another station called Suceava Nord, but it is located in an industrial suburb. The station in which we got off has the appearance of having been important in the past. We can also see that it has a cafeteria and a grocery store where they also keep the luggage for a very cheap rate.

Nearby there are a couple of hotels, but in reality, the station is also far from downtown. So we take a taxi to the hotel we have reserved. It is the most expensive hotel in the center of Suceava, with breakfast included. It is elegant and the rooms are well equipped, but the days we were there gave us the impression that it is very abandoned.

When we used the shower cabin for the first time we did not realize that the water was going directly to the ground. So we caused a flood that came to soak the carpet in the bedroom. The girls at the reception seemed to be there to visit. They gave us another room on the same floor (the hotel was empty, of course) and they were unconcerned about the matter until Easter.

It is a pity that good hotels like this one deteriorate due to lack of maintenance. But I think that if I had to recommend an accommodation in Suceava I would opt for the cheapest options available in the center. We leave our hotel for the commercial center of the city and the first thing we do is buy supplies in a supermarket. We are on Saturday. The central Easter ceremony will be held tonight and almost everything will close within a few hours so as not to reopen until Tuesday.

So we carry a good amount of cheeses, sausages, fish preserves, bread, and beers. Then we went to see the city, which is not as ugly or as insubstantial as some travelers say. Right in front of the hotel rises one of the historical churches: Sfantul Dumitru, that is, San Demetrio. In it, we get an idea of ​what we are going to see in Bucovina in terms of famous monasteries. All date from the same time (mid-sixteenth century) and are quite similar.

We need to get a car to go out tomorrow to see the famous painted monasteries of the region. But that is going to be a difficulty since the travel agencies and car rental agencies are already closed. Going down the boulevards we arrive at the beautiful Central Park and we enter the Tourist Office. We collect some brochures and present our problem to the manager. He telephones some contact he has and offers us a car with a driver.

We appreciate the management, but the price seems very expensive and we still have an ace up our sleeve. A Romanian friend who lives in Zaragoza has called us by surprise to tell us that she is here on vacation and that by noon she will come to the center of Suceava. Meanwhile, we take a look at the other architectural gems of the city. We see the Domnitelor Church, the restored Mirauti Church and the most important of all, the Ioan Cel Nou Monastery.

The latter is a religious center of the first order since it houses the relics of the most revered martyr in the entire region. When our friend arrives we sit down with her to drink something in a bar that we find along the way. It will be very useful these days because it does not close and it is at the same time coffee, brewery, restaurant, and disco-bar. Besides giving us great joy with her presence, our friend does not disappoint us.

She immediately calls an acquaintance of her, who has just returned and is out of work. She has a car and tells her that she will be happy to walk around the region without discussing the price, so it seems good to us. Very satisfied with the result of the management, we let her go to solve her affairs. We go back to the hotel to eat some of what we have bought and to rest until the night.

Through the windows of our rooms, we see that the streets have remained empty. It also rains and the afternoon looks sad. We take the opportunity to go through the Romanian television channels, something that, strangely enough, we enjoy a lot. There are chains dedicated to the rural world that are explaining the peasant traditions linked to Easter.

There are also many that only broadcast videos of folk music, and sometimes we cannot contain the laughter seeing how simple these videos are. They always sing a soloist or a couple, but around them, there are many extras dressed in typical costumes that do nothing. They just shake a bit and provide color to the scene. Finally, we see the channel destined to the Roman public, with videos of style. Finally, towards 23h30 we decided to leave. 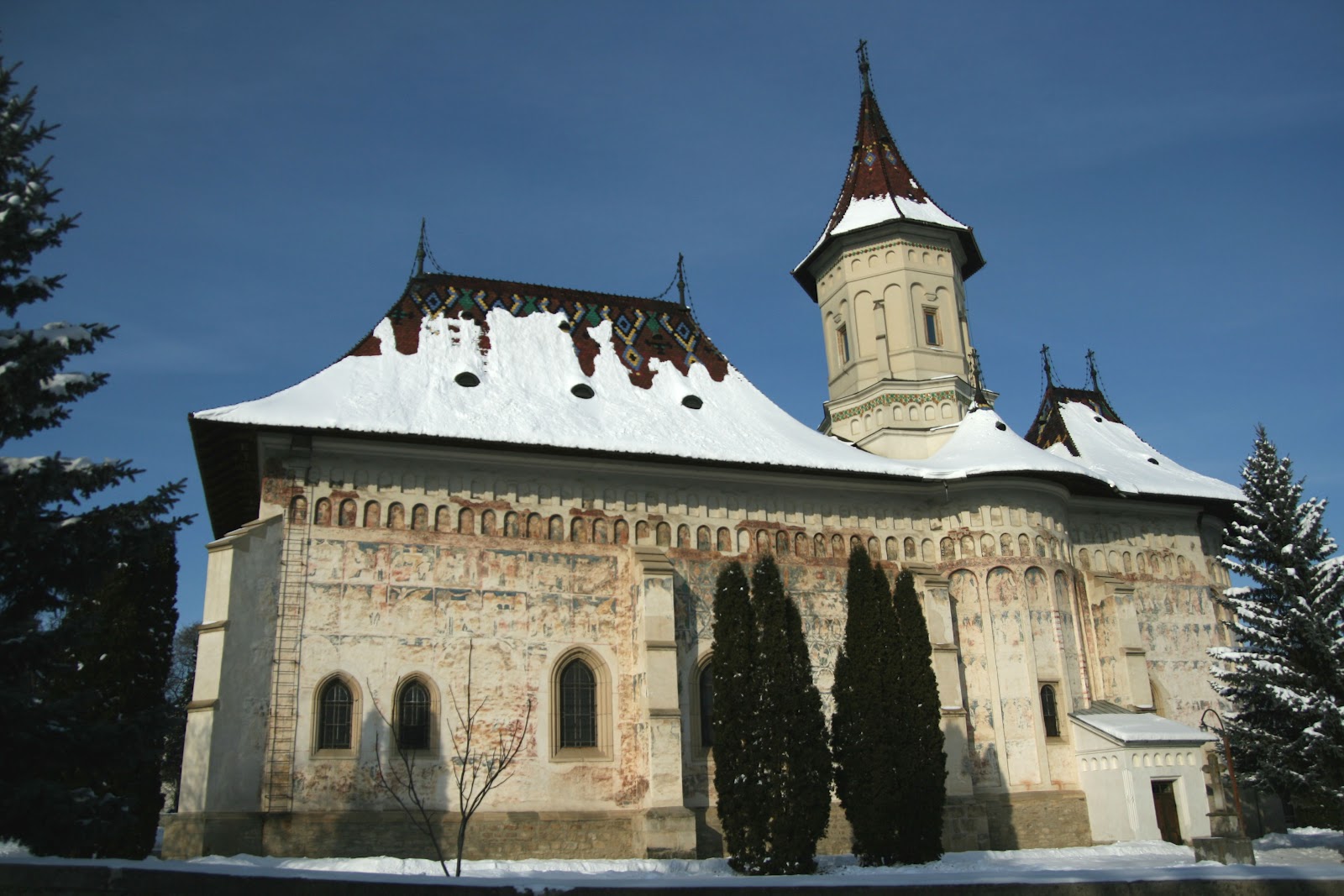 It has stopped raining and the streets are somewhat animated with groups that go to the churches. We, of course, have chosen to go to Ioan Cel Nou. Before entering, we buy candles in the street in plastic cylinders with a lid, which will serve to "receive the light". There are many people when we enter the courtyard of the venerable monastery, but they do not crowd or seem anxious. There is nothing to do with our "jump to the grid".

For us, it is a novelty and we want to see the event up close. So we enter the church and we get closer to the bottom to wait for the moment in front of the iconostasis. And the moment is not long in coming. The lights of the whole temple are extinguished and after a few seconds, the faint radiance of the new light in the sanctuary is sensed. The central door opens and the pope transmits the flame to the candles of the faithful who are closer.

They pass it behind and in a few seconds, the entire monastery is populated with llamas. Christ was resurrected! This is what everyone thinks, but at the moment they do not say it very loudly. The atmosphere is one of discreet recollection. We went back to the patio. Near the door of the enclosure, they have erected a great platform and the ecclesiastical dignitaries are already launching speeches to the congregation.

As we understand almost nothing, we soon get bored and take the road to the hotel. The streets are now full of people who return to their homes with their candles more or less protected from the air. There are also many groups of young people who seem to go to private parties or directly to "get a bottle", but yes, each with his paschal candle.

Mine is of such poor quality that the lid burns, and then I burn my fingers as well as trying to tear it off. Finally my flame goes out and I throw it away. Our friend has also disposed of her own and only a little nun, insists on keeping the light of faith until we arrive at the hotel. There we will leave it planted in the sink, so as not to cause a fire while we sleep.

Before arriving we enter the Catholic Cathedral, which is in the Central Park. There they also celebrate a nighttime ceremony in which the red-painted eggs that worshipers carry in wicker baskets are blessed.

Next day we had an early breakfast. Luckily there is a cook on duty at the hotel and breakfast is not bad. At 9 o'clock, our friend arrives promptly, with a somewhat old car, but suitable for all services. We are going to visit the region of Moldovița today.