Jericho is a city with a reputation. It is the oldest city in the world. It is also at the lowest point on earth. Jericho in the West Bank is more than a 10000-year-old city. There is also the mount of temptation. These superlatives ignite a burning and expectant travel fever in me. My first trip to the West Bank is a steeplechase full of unexpected, and usually charming surprises.

In the morning I climb up to the old town. I pass the souk. There my trip is interrupted for the first time by a youthful barber! He thinks that my mustache needs a decent shape! Arab hairdressers find that the beard, the real jewel of the man requires elaborate care and a razor-sharp contour.

Nevertheless, I let myself be spread. So I sit down on the barber chair and try to fix, just a little bit here and there a bit. In addition, fragrant waters are rubbed into the beard, the neck kneaded with damp fingers, the face scrubbed with caustic essences and polished with a greasy pomade to a shine. Only when my face sparkles like linoleum and my beard are snow-covered, the beard trimmer leaves satisfied with me. After this pretended self-praise, he demands an adventurous fee.

I pull my hood deep in my face, sneak across Mangers Square like an aromatized scented candle, and turn into Falafel Street. So finally I reach the bus station. There, a friendly shopkeeper shows me the way down to B4, where the big taxis are waiting. When I arrive, only a boy sits in the minibus to Jericho. We wait about twenty minutes, then the taxi is full and it starts.

The drive out of Bethlehem is not that great. But after we pass Jerusalem and see the sprawling landscapes, it looks incredibly beautiful. There are rolling hills, in the desert of Judea. The roads are pretty well developed and freshly asphalted. There is illumination with state-of-the-art solar lights.

Suddenly the vehicle goes down steeply in steep serpentines. In the distance, I can see the shores of the Dead Sea. Immediately I think in stereotypes. It is so dry, so gray, without tree and shrub, so deserted and far, I imagined the Holy Land.

The taxi driver does not think so romantically. He revels in the rush of speed and bangs down the curves in generous arcs. Meanwhile, we also paid. The women in the back of the taxi knock the men on the shoulders in front of them, putting money in their hands, which they then push forward to the driver. As the change does not fit, drivers and passengers switch back and forth. The driver has his eyes more in the wallet than on the street. It's fine, we arrive safely in Jericho.

The big taxi stops in the middle of the city on the public square. The main square of Jericho consists of a large intersection with a park in the center. All around there are houses with lavish advertisements. It is already two o'clock in the afternoon. At five o'clock the sun goes down. What should I visit? How should I decide?

I find help surprisingly in the tourism center in the middle of the public square. I am greeted by a very friendly and attentive young man who, however, does not seem to be prepared for clientele. After all, he takes me to his office, offers me the most comfortable chair and explains in detail about the monuments worth seeing in the ancient city of Jericho.

This service goes far beyond the customs of Arabian hospitality. The young man jumps up, pushes information brochures back and forth, and spreads up a map of Jericho. He descends divinely onto a wheeled stool, shakes his dark flowing hair, and steers his leg close to mine. If eyes could spark, its fireworks ignited.

This performance is probably called the charming love. Everything is very well presented. Every gesture and every look perfectly rehearsed. The magic still misses its effect. The young man falls through my prey. The old box of history has lured me to Jericho, not the adolescent love. Nevertheless, I am surprised. There are lots of men in the middle of Palestine, in the middle of Jericho, in a public square.

Now I have a good two hours of daylight. I decide to visit Hisham's palace 3 kilometers north of Jericho. It's possible, I think, and I can look at the city a little bit more. However, I do not find much on my walk.

Jericho looks like a bunch of street villages growing together in public square. The city fringes for the manageable center in a rural periphery of nurseries, fallow land, and oil fields. Left hand there is the mount of temptation. Maybe I should have driven up there, I think. I'm almost alone on the road on foot anyway. But only a few cars drive. 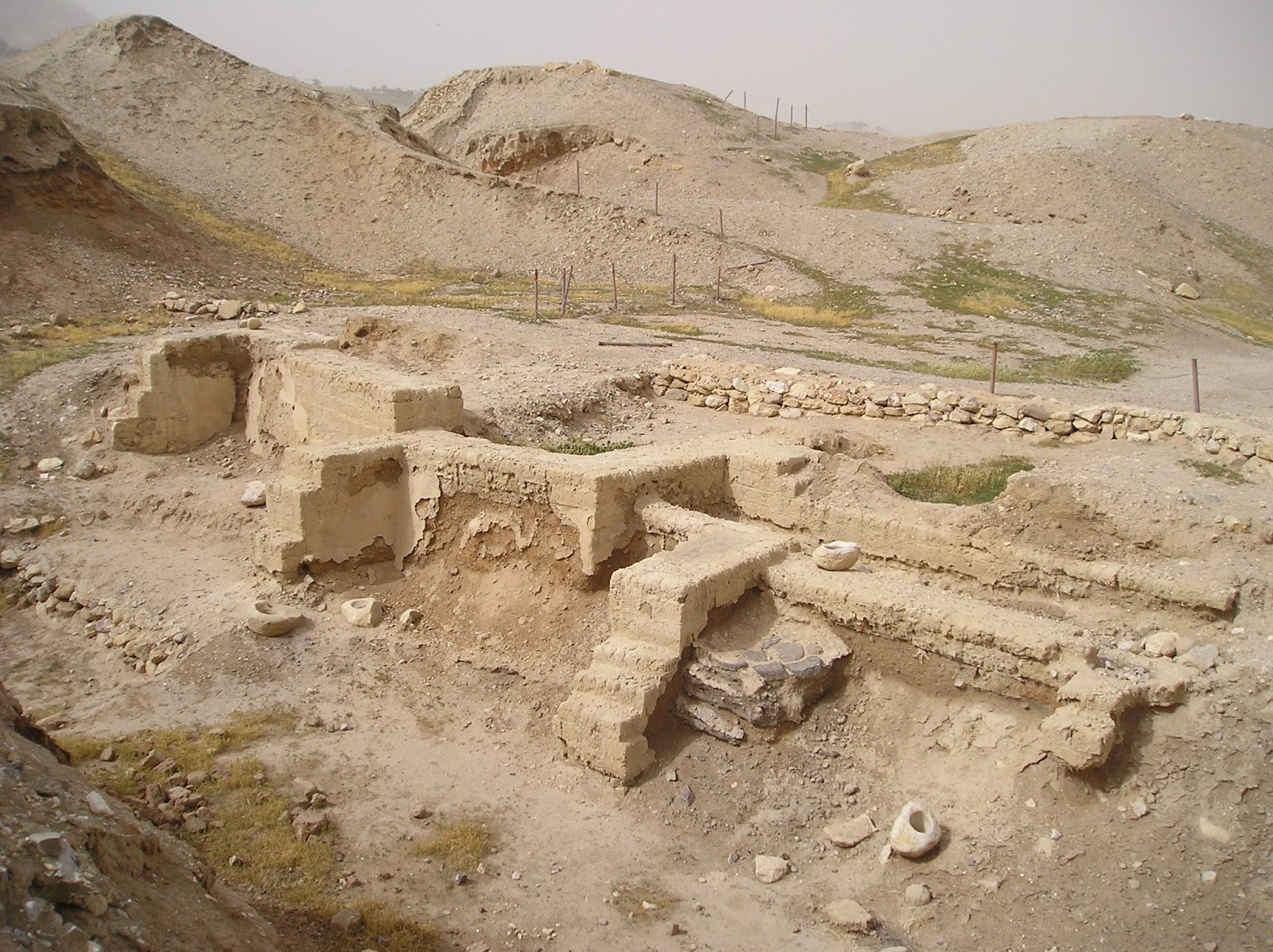 Then I reach Hisham's Palace. It is the excavation of a winter palace from the Umayyad period built around the year 750 and inhabited only for a short time. Then the buildings were destroyed by an earthquake. A tiny museum introduces us the history of the palace. The most important works of art from the excavation are scattered in museums in all over the world. So I look at many fragments and read many explanatory panels. So I am perfectly prepared to understand the ruins of the palace properly.

Once upon a time, there was a magnificent and defensive gate. There are splendid chambers for the caliph Hisham and his successor al Walid. There is a luxurious bathhouse with fountain and running water and a big mosque. As always in an archaeological dig, it takes a lot of imagination to make something alive out of the dusty rubble of these inanimate walls.

But the Mediterranean becomes tangible as a huge melting pot of high cultures. The architecture of the bathhouse has a role model in Roman thermal architecture. In the construction technique and the forms of the magnificent mosaics, the handwriting of Byzantine craftsmen is recognizable. The imaginative stucco ornaments on the walls are influenced by Persia. What were those great times when the West and the East could still inspire each other, I think.

A call from Bethlehem catapults me back from the great times into the desolate presence of the Middle East. Above the mount of temptation, the sun sets as dramatically and romantically as if an artist had resorted to canvas and brush. I am depressed on the way back to public square.

There I get into a big taxi to take me back to Bethlehem. It will be a long drive. Just before Bethlehem, a checkpoint is closed. Nothing works anymore. The Palestinian riders react quite calmly. They are probably used to waiting in traffic. They get out, walk up and down between the cars, smoke, chat, and buy provisions. Somewhere in the distance, flares rise into the night sky. Is it a bonfire?