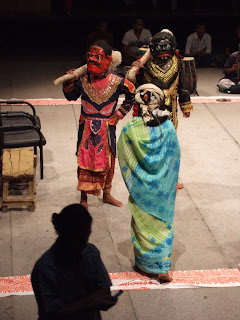 Jatra is a popular form of folk theatre from the eastern region of India and is usually an enactment of epic four hour long plays with a cast and comprising music, dance, acting, singing, lighting and dramatic props played on giant outdoor open air stages.

People wait for the songs, which in their popularity compete with those from films. They include social themes to suit modern taste. The chorus and the musicians take their position off stage. There are no stage properties except a single seat meant to serve various functions, a throne, a bed or a wayside bench. Other properties are brought in and removed by the actors themselves.

Here they constitute the singing of a melody and the playing of several instruments. Often, the group dance is followed by a solo dance. Onstage, the actors move in a very theatrical manner. He does not hold himself back but throws his weight forward. Passionate, charged with energy, he explodes into fiery dialogue. He moves like a tornado in the small arena.

Traditionally, women were not allowed to perform, only males acted, in female garbs which was a dominant feature of almost all theatres across the world. Males used to put on female costume, makeup and flowers to deck up themselves. Today, although women are accepted in the theatre, they find it difficult to adjust their femaleness to the women in the Jatra and men are still the best women in Jatra.

The orchestra is seated on two ramps, each a bit lower than the platform and running parallel on opposite sides. The women sit on one side, as in temple gatherings; the men squat on the other three sides. The boys huddle near the rim of the stage. Through this gangway the actor enters and exits. At important moments it becomes a part of the acting area. The gangway can serve as street, or temple path, or highway.

In those days the written text of a Jatra was in song and verse. The actors spoke improvised dialogues. Scenes of humor and the life of the lower strata were in spicy prose. Still music and song dominated. The popularity of the Jatra still now has been constantly increasing. It stands at the crossroads with cinema and television as its rivals but still it retains its unique mantel as a branch of successful performing art in this region.

In India everything is representation-cinema, theater, dance, musical and puppet-rooted in the Natya Shastra, the ancient treatise on performing arts, attributed to the sage Bharata Muni . In the first chapter tells how Bharata was born on Theatre. At one time the earth was chaos. Despite humanity had received the four Vedas, the sacred books of knowledge, men of lower castes continued to live in ignorance only Brahmins were allowed to study the Vedas and behaved unfairly.

The restlessness earthly disturbed the gods of heaven and prompted them to seek the intervention of Brahma, the creator. Tranquilizzò the gods Brahma and meditated on how to distract people from the bad road and instill knowledge in their hearts. Since all knowledge resides in the Vedas, the creator decided to take the essence of each of the four books and combine it into a fifth Veda, accessible to all. Thus was born the Natya Shastra, a treaty to teach to represent the knowledge and make it understandable to the people.

So Brahma taught the sage Bharata Natya Shastra and they instructed his hundred sons. The company of Bharata prepared to stage the first work in front of an audience.

The story was represented the victory of the king of the gods Indra demons (asuras), a person who did not like the demons, among other things except the inaugural event. The asuras, outraged by ridicule with which they were represented, sconquassarono the stage and the actors did flee. Indra drove them out with a flagpole. But it remained to be solved how to protect the scenic space for future demonic attacks. The meeting established the proportions of the theatrical space and assigned the guardian deities of the directions to supervise its borders.

Meanwhile, a delegation went from demons to seek, through diplomacy, to avoid future fights. Brahma assured the demons that the new art was for everyone, including demons, and that if the gods were victorious first work, in another the demons would have triumphed. The quiet returned. However Bharata Brahma suggested to never forget to worship the theater space before a performance to satisfy the guardian deities and appease the wrath of the demon-thing that continue to this day the descendants of the original artists. Years passed and the sons of Bharata became very popular.

As often happens the fame made ​​them feel proud excessively. In the thirty-sixth chapter Natyashastra of Bharatamuni tells how the ego of his sons made ​​them stumble into misfortune. The hundred sons of Bharata staged a performance that drew the ire of the wise and religious authorities. Despite attempts at mediation actors failed to appease the fury of these essays and cursed the sons of Bharata caste Brahmins to become a Shudra, the last of the four castes.

The theater and the performing arts are sacred and pure gift from the gods to men, but the artists that are staged mere humans, of all walks of life. Through the discipline, practice and devotion can go back to being on the stage, or in the case of film actors, stars almost divine. As long as the ego is kept under control to avoid other unpleasant curses.