Pooram is a demonstration of splendor that takes place every year in several cities of Kerala. And I went to see the most famous of them, that of Thrissur, in other words, the Thrissur Pooram. I had to change my travel schedule to be especially here for the Pooram and finally, it was worth it. After attending a traditional dance show called Kathakali, I left Cochin with the ferry and then the train to go to Thrissur to attend the Pooram.

The train trip went well, but it was the arrival at 2am and the night on a bench at the station which was harder. Obviously, I do not close my eyes without having secured my stuff with my two bags hanging on the bench by a chain and padlock. At 6am, I get up and I start looking for a hotel. Thrissur is much bigger than I imagined.

My challenge is to find a hotel, and especially at a decent price. Because of the Pooram, the hotels charge 10 times higher than usual. After an hour of walking and a good number of refusals, I find a lodge! I settle in my room. The room is decent. It is very hot inside but I have a nice balcony.

At noon I go around for the discovery of the city and I meet elephants being fed near a temple. One of them, the star (the central elephant), is in an interview with a video reporter. Obviously, it leaves it to its master to answer questions and just eat. On my way, I see a nice restaurant, with air conditioner and at super affordable prices! The waiters were always smiling and very happy to welcome a tourist.

Later I went to the tourist office to gather a little information and the person in charge give me a pass which gives access to a private platform for tourists to admire the show, which will be very practical afterward. In Pooram, in fact, there is a competition between two temples. They each have their God of course and 12 elephants each.

The competition is quite special. Participants are to open umbrellas of all colors and change them fast. The group that will have the most colors, the most eccentricity and, the fastest changes will "win" the competition depending on the shouts of the crowd. The Pooram is supposed to start at 2:30, but in fact, in the temple, some processions are already taking place.

In the afternoon the teams practice in their respective temples. I decided to visit one. The line lasts more than an hour to enter the temple, and the crowd gets bigger. Inside, some elephants and those who do the maneuvers practice. We are getting closer and closer but the density of the crowd is increasing. I decided to try to pierce this human wall to go into the fire of action. When I manage to get close to elephants, it's madness.

People are crazy. They jump in places to the sound of musician and they shout with all their strength. A lot of people come up trying to see what's going on. Eventually, people are just on fire and the craziness is at its peak. Of course, there is the practice of changing the umbrella, but people do not care. I think people are just happy to share it all together and to party. In any case, I do not regret moving forward!

The elephants move in the city to a nearby temple, preceded by musicians (drums, timbales, and kind of horns). People shoot fireworks with a parachute that come out during the explosion. The funniest is to dodge the shells the size of a coconut that falls on the crowd with each shot. At 5pm the demonstration takes place.

Well, I go back to walk the streets and head for the stage to watch the show. But there are so many people that we cannot make it. Alone, I managed to sneak behind the stairs that I climbed from behind since almost impossible to get to the front. Meanwhile, I with two locals climb on a sort of presidential platform, reserved for tourists. Given the crowd and the superb location of this grandstand which is at the front row, I enjoy it! 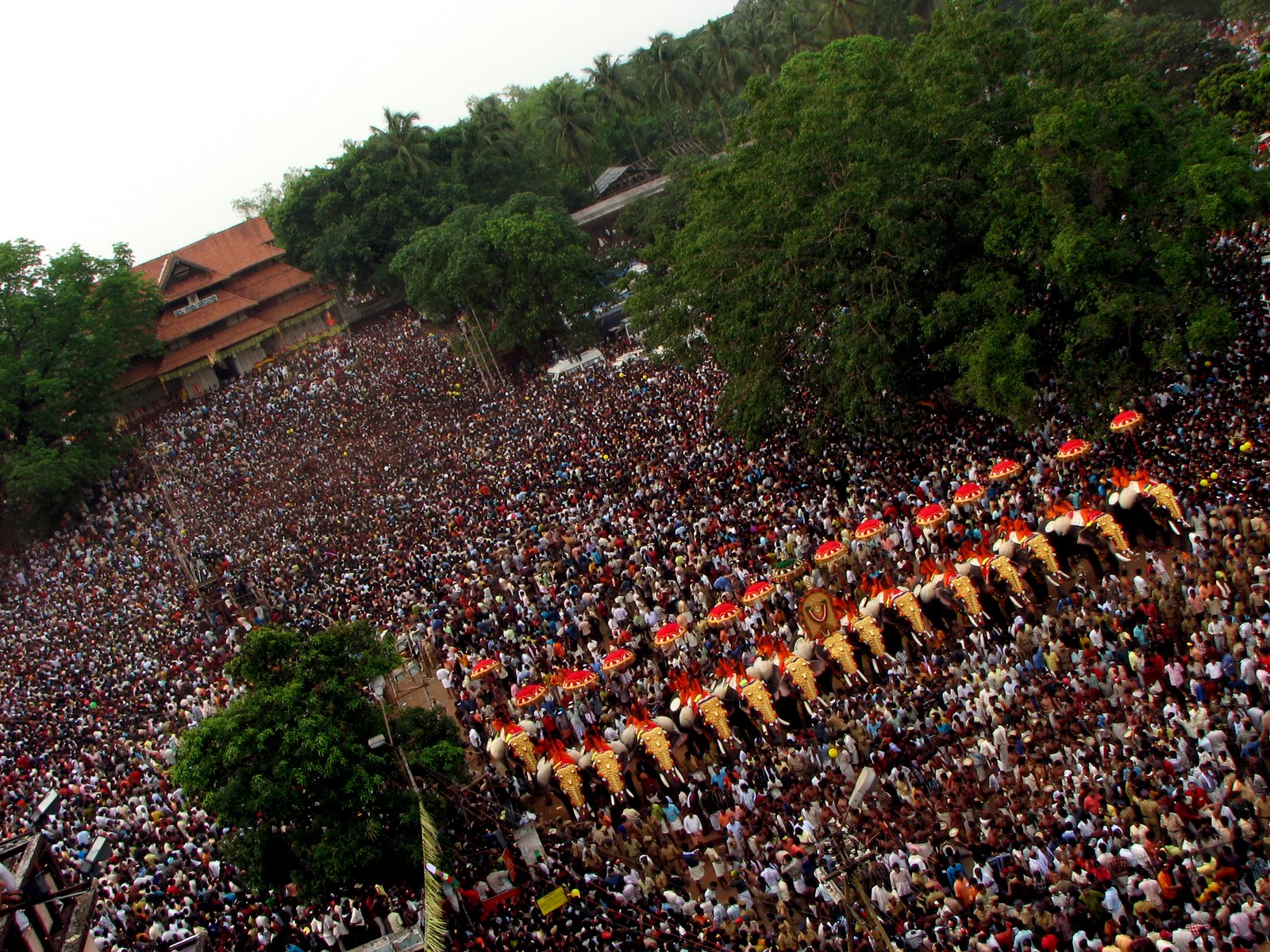 The show begins. Every 2 minutes, the teams prepare and change their umbrellas under the shouts and applause of the spectators. It is quite surrealistic as a show. This last for a few hours, interspersed with a pause or the elephants enter the temple. The crowd in waiting seems ready to explode.

After the musicians leave, 15 elephants leave the temple one after the other. As the first elephant come out of the temple, the crowd bursts. There are so many people. I would easily say more than a lakh people. The worst is that a good part of where they are, they cannot see anything of the show. It's no big deal. The platform allows me to see but especially to have a little space.

Each group represents a temple. The Thiruvambadi temple is dedicated to Krishna and the Paramekkavu temple is dedicated to Parvati. It lasts a good two hours, during which the crowd intensifies and the atmosphere goes into a crescendo. There is a wave of cheers and dances with every change of umbrella. It was a great moment!

I end the day in a good restaurant where I enjoy mutton coconut fry with rice. I decided to find a bar that welcomes me to allow me to drink a second beer! Well, there are a lot of people in town, and the streets are pretty amazing.

After a short nap, I return to town at 3am for the 3 hour long fireworks. There are too many people. The police help us to pass in the crowd. But all is well worth it since the fireworks begin. It looks a lot more like the bombardment. People like the explosions, the fire, and the noise. But for a few minutes, there is an escalation of explosions on the ground.

Then, a break and the second temples try to surpass these explosions of fireworks. Despite the huge noise of the first it still succeeds to go beyond. It is completely crazy! So after all these emotions, I go back to my hotel. My room is like an oven and I have to sleep outside on my balcony.

Overall, it was Thrissur Pooram and I'm really happy to have participated. I saw things too that I would never forget. All ended at noon with the last fireworks that I listen from my balcony.