As soon as we leave work we go to the airport. My partner and I flew from different airports because we live in different cities. We chose the Stansted airport, which is the one that best suited our schedules. We arrived in Stansted at about 11 o'clock at night. We wait in a huge queue to pass immigration.

Since it was the Christmas weekend, we expected many people to go to London. It was not the case. There were lots of open counters, and we did not have to wait more than 5 minutes. We went directly to take the rental car. We had booked the cheapest of all. When we arrived we were offered a brand new automatic hybrid car.

It took us a while to adapt to the car, as we did not have much experience with automatic cars (basically my partner had driven once) and hybrids. The brakes went so well that we almost left our chins when we tried it, and we forgot turn on the lights. Well, the first meters were chaos,but then it went very well, and in fact we appreciated that the car was automatic.

Well, the thing is that we had booked a hotel near Stansted, as we arrived so late. The hotel was 10km from the airport, but of course, what they do not tell you is that the roads are without a lamppost. Thank goodness we had the GPS. The hotel in question is in Thaxted. We booked a double room with bathroom.

The room was fine, large, clean, with typical English decor, carpet, bathroom maybe a little old, but fine. There was free wifi. It also has parking for cars, although in the case of a town, I imagine there will be no problems to park. In the room we have a water heater for tea, coffee and cookies in case we feel like having a drink.

Breakfast was included and was a la carte. They had the typical English breakfast of eggs with bacon, tomato, sausage, mushrooms, and also others like eggs benedict. In addition to that buffet with buns, cereals, fruit, juice and tea or coffee. After breakfast, we set out for our destination, York, but before we wanted to pass through Cambridge, which was on the way. I had already read that parking in Cambridge was difficult, so we left it in a park.

We parked in Trumpington, as it is very well indicated from the highway. We found it very comfortable. The bus leaves every 10 minutes. When we arrived in Cambridge, we went to the tourist office to be informed a little about what to see, and if they could give us a map. The man from the tourist office explained everything very well, but he did not give us a free map.

The most important thing to see are the colleges. There are 31. In the most important such as King's college (especially its chapel) or Trinity College, you have to pay to enter, but not the rest. We went into a few that we found along the way, and we did not pay in any.

It is also beautiful the road parallel to the river, on the back of the colleges, from where we can see the gardens, and people go on a gondola. After seeing Cambridge we took the car to get to York before dinner (we had 2 or 3 hours on the way). In York we had booked a room in a bed and breakfast about 5-10 minutes from downtown.

The B&B has rooms with bathroom, very clean, and the owners are very friendly. It has wifi, and parking for the car. It also had the water heater, which came in handy when we arrived after dinner, or to spend the day there. We left things and went to dinner. After eating so much at breakfast, and at lunchtime we were not hungry.

We dined in an Indian restaurant (it was almost night, and we did not know the city, so we did not look for much). In England it is very normal to ask for tap water. After that we went back to the hotel, and saw a bit of the Christmas atmosphere in the streets. 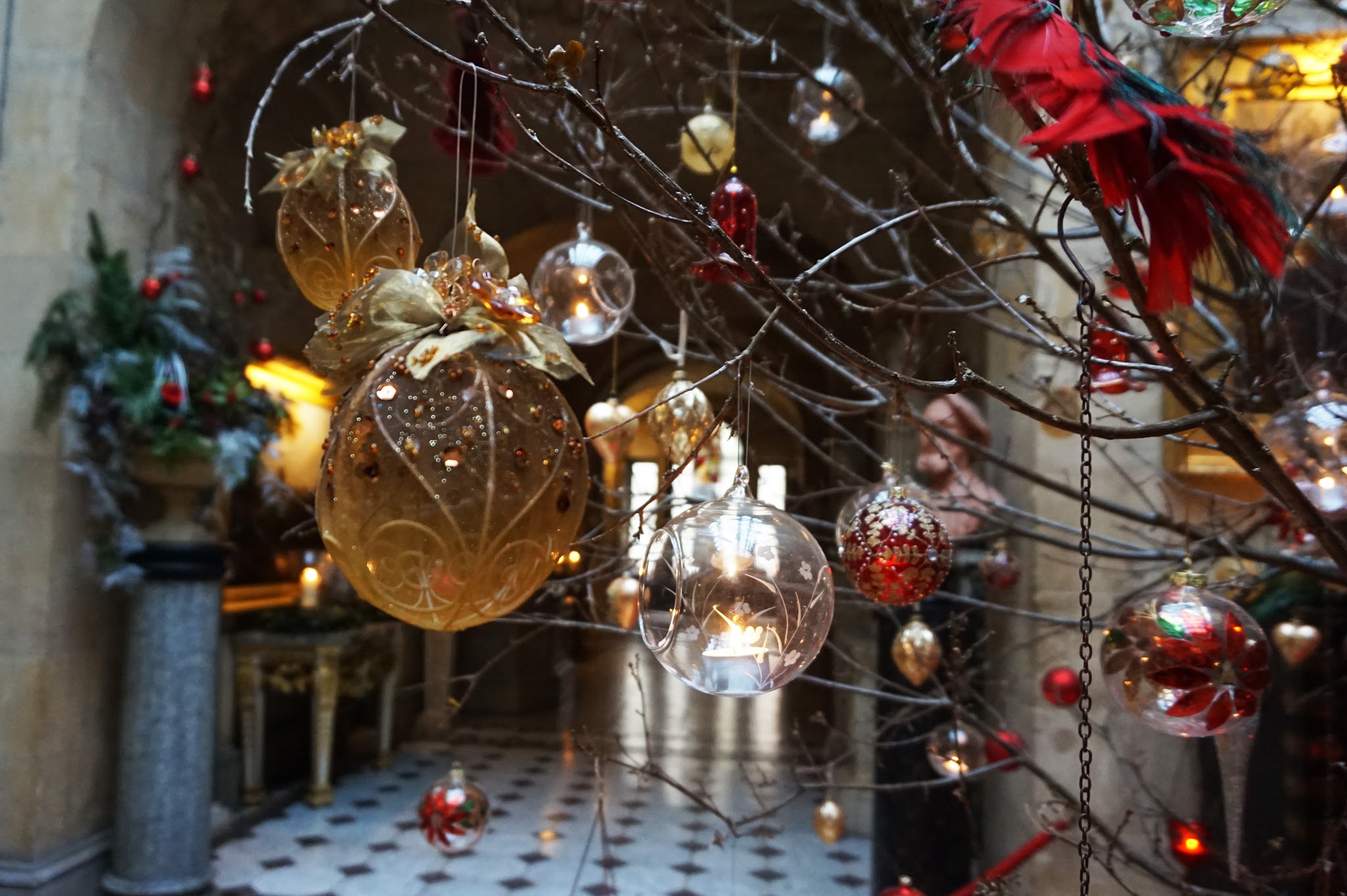 This day was reserved to see York. York was the star destination and did not disappoint at all! It is a historic city-fortress, capital of the county of Yorkshire. We loved the city. The cathedral is imposing, and only on the outside (we do not enter inside). And it has a lot of old buildings, and charming streets. The city still retains part of the walls, and you can walk through them.

The first thing I found was nothing more and nothing less than the ruins of the St Mary's Abbey, which was founded in 1055. The ruins are located in the now called gardens of the Yorkshire Museum, full of greenery, flowers, the museum itself, ruins and a characteristic and huge house.

Once past the gardens, one of the typical English red cabins appeared, very old, with views towards its churches. Possibly the most iconic building in York is its imposing Cathedral, known as York Minster. The old church was burned in the revolt of William the Conqueror. In 1080, Archbishop Thomas began to build a new Gothic cathedral, which took two and a half centuries to build.

It is considered the most beautiful in England, both on the outside and inside with its famous gothic stained glass windows (entrance quite expensive by the way). Then, strolling through its small streets full of small shops we enter fully into another place, The Shambles. It is a magical street, with bazaar and shops with thousands of colors, vintage clothing stores, chocolate shops, and jewelry shops.

It was like going back a thousand years, with such curious things as the poster in memory of Margareth Clitterow who was persecuted and sentenced to death in 1586 for being Catholic. There is the Whip-Ma-Whop-Ma-Gate alley where the law allowed to tie and whip the wife if she was drunk.

The two-story houses with latticework date back to the Middle Ages and overlook the cobbled street with its stories of ghosts. Another one of the places that symbolize its medieval time is the Clifford Tower, one of the two towers that the Normans built on each side of the river and that was rebuilt in the 13th century.

After climbing all the stairs to the tower we all see that there we are how they were recording a series or movie just below, which of course had to get close to see. Next to the tower is the fire station, as well as many buildings that attract a lot of attention throughout the city.

The next thing was to go to the Ouse River, where a cruise ship passed under its bridges and there were many Englishmen drinking their pints, many of them already in a good state of intoxication. Walking through the downtown streets with brand stores also give it a modern look that blends perfectly with the old and that manages to merge perfectly through its houses and colorful flowers.

Another characteristic of York are its walls, of which a large part of them still remains and its four medieval gates of Micklegate, Bootham, Monk and Walmgate. After a while walking around its wall and seeing its views, it started to rain so I set off straight to one of its most famous museums, Jorvik Viking Center.

It has an important Viking archaeological site, where a museum has been created to show his discoveries and tell the whole Viking story related to York recreating their lives. The museum is very interesting because the tour takes us through all the places in history. Then we can see the found objects and some other things. The truth is that it is very entertaining although it is quite short and the price is high, but it is worth it.

From there we go direct to the parking lot and to leave a beautiful city, back to my apartment in the valley, all through a very comfortable highway. If I had to keep one thing of York, I would say for sure, get lost in its charming streets. After being walking all day we decided to go home to take a nap. At about 7 we went back out for dinner, this time in a pizzeria.